MONTREAL — Quebec is imposing tighter restrictions on public and private indoor gatherings in Montreal and Quebec City, among other parts of the province, Health Minister Christian Dube said Sunday evening, after a recent increase in COVID-19 cases.
Sep 20, 2020 6:27 PM By: Canadian Press 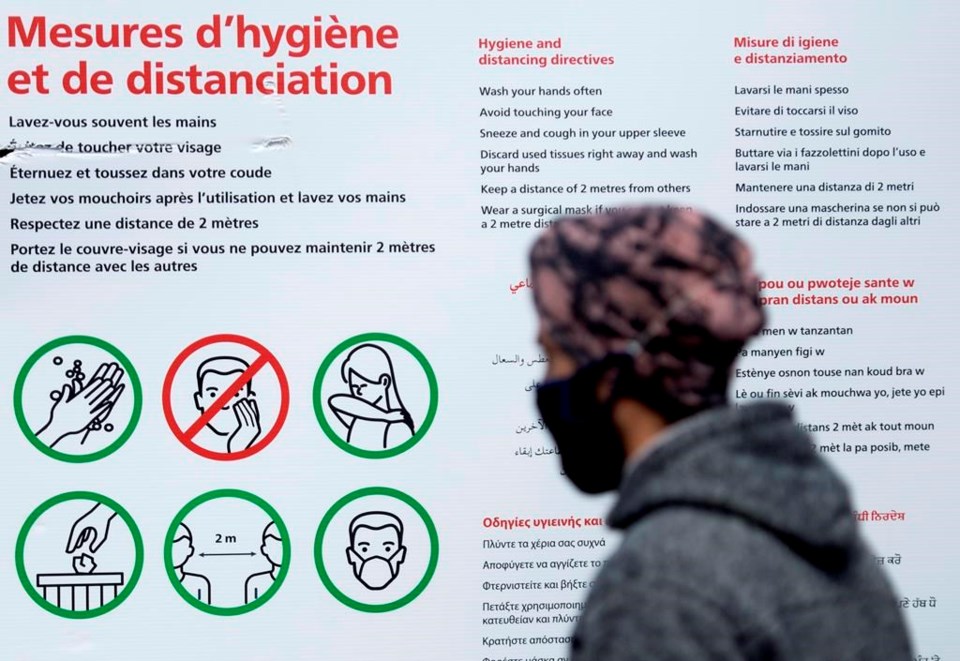 MONTREAL — Quebec is imposing tighter restrictions on public and private indoor gatherings in Montreal and Quebec City, among other parts of the province, Health Minister Christian Dube said Sunday evening, after a recent increase in COVID-19 cases.

The provincial government is moving Montreal, Quebec City and some of its surrounding areas, and the Chaudiere-Appalaches region to the orange "moderate alert" level, Dube said in a news conference.

That is the second-highest level under the province's four-tiered, colour-coded COVID-19 risk assessment system, which measures the risk posed by COVID-19 in specific geographic areas.

"The number of cases is increasing, outbreaks are multiplying and our capacity to treat the sick is decreasing," Dube told reporters.

In orange zones, bars and restaurants will need to stop selling alcohol at 11 p.m., while a maximum of six patrons will be allowed to sit at the same table, down from 10. Bars will also need to close by midnight instead of 1 a.m.

Indoor private gatherings in orange zone areas will be capped at a maximum of six people, down from 10.

Some indoor public gatherings — such as religious services, weddings or events held in rented halls — will be capped at a maximum of 50 people across the entire province and at 25 people in orange zones, down from 250.

Theatres and concert halls will stay at a maximum 250-person capacity as long as physical distancing can be maintained, Dube said.

The minister called on people in orange zones to limit their contact with others as much as possible and to avoid travelling to parts of the province that are classified as lower-risk zones.

"I'm asking you to minimize what we'll call non-essential visits," he said. "Avoid family dinners and (dinners) with friends, and parties."

The changes, which Dube said will come into effect at 12:01 a.m. Monday, were announced just hours after Quebec reported 462 new cases of COVID-19, hitting a months-long high for the second day in a row.

The province had reported 427 new cases on Saturday, which was already the highest daily tally since late May.

Health officials also said five additional deaths attributed to the novel coronavirus were reported on Sunday: one of them occurred in the last 24 hours, while the other four took place between Sept. 13-18.

Quebec has now reported 67,542 total cases of COVID-19 and 5,802 deaths attributed to the novel coronavirus since the pandemic began.

"I don't want to be in a bad situation (at) Christmastime because we haven't done what we're supposed to do," Arruda said. "The power is (in) your hands."

Meanwhile, authorities said hospitalizations increased by seven cases on Sunday, for a total of 138 across the province.

Of those, 38 people were in intensive care — the same number as the previous day.

Quebec also said it conducted 28,725 COVID-19 tests on Friday, the last date for which the testing data is available.

This report by The Canadian Press was first published Sept. 20, 2020.

Quebec premier says pandemic has left health-care system "running on empty"
Oct 20, 2020 5:26 PM
Ford appeals for people with symptoms in COVID-19 hot spots to get tested
Oct 20, 2020 5:07 PM
Comments
We welcome your feedback and encourage you to share your thoughts. We ask that you be respectful of others and their points of view, refrain from personal attacks and stay on topic. To learn about our commenting policies and how we moderate, please read our Community Guidelines.