TORONTO — A video that purportedly shows the killing of a 58-year-old volunteer outside a mosque in Toronto may be dark and grainy, but it was released to show that such crimes do take place in Canada, the head of a national Muslim group that posted
Oct 16, 2020 5:25 PM By: Canadian Press 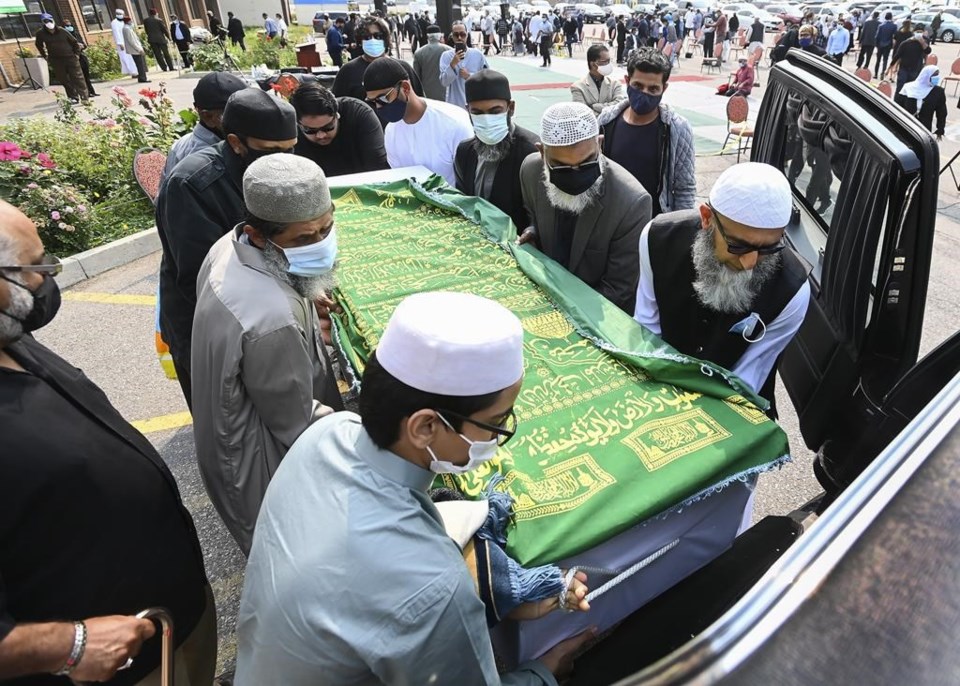 TORONTO — A video that purportedly shows the killing of a 58-year-old volunteer outside a mosque in Toronto may be dark and grainy, but it was released to show that such crimes do take place in Canada, the head of a national Muslim group that posted the clip said Friday.

Mustafa Farooq, the CEO of the National Council of Canadian Muslims, said the organization posted the clip online with permission from the family of Mohamed-Aslim Zafis, who was stabbed outside the International Muslim Organization on Sept. 12.

The mosque has asked police to investigate Zafis' death as a hate crime, and the council and other multifaith human rights groups have alleged white supremacy was an element in the stabbing.

"These are things that happen. And Canadians who want to look at it — to see that face of white supremacy ... can do so now," Farooq said of the video posted online by the council on Thursday night.

The grainy, 46-second security camera clip appears to show someone seated outside the mosque in the city's west end, facing the building's parking lot.

Someone else is seen walking behind the seated person, then approaching them from behind.

There's a brief scuffle, then the seated person stands up before collapsing to the ground as the other person runs away.

A spokeswoman for Toronto Police said the force was "aware of a video circulating online."

"This is an active and ongoing investigation and we will follow the evidence where it leads," Const. Caroline de Kloet said in an email Friday morning.

Guilherme (William) Von Neutegem has been charged with first-degree murder in Zafis' death.

The Canadian Anti-Hate Network has alleged that social media accounts under the name William Von Neutegem show a chant and symbol on YouTube associated with a neo-Nazi group that encourages killings. It also alleges an account with the same name follows a white supremacist on Twitter.

The Canadian Press has not verified that the accounts belong to the accused.

A coalition of organizations, including the Muslim council, has urged the prime minister, in the wake of Zafis' death, to come up with a plan to dismantle white supremacist groups across the country.

"We have an important duty as Canadians to dismantle these groups," Farooq said Friday.

Trudeau said Friday that the government was working to do more to counter hatred.

"Our intelligence agencies remain extremely concerned with the safety of Canadians from violent ideologies and particularly white supremacy and intolerance," he said. "We're going to continue to work very hard to keep Canadians safe."

Toronto Mayor John Tory said Friday he had spoken with Farooq and would be visiting two mosques in the coming days to show his concern for the community.

"There has been an uptick, to say the least, in attacks of different kinds on mosques and people of the Islamic faith," Tory said at a news conference.

"We're going to have to deal with that as best we can."

Meanwhile, a spokeswoman for Public Safety Minister Bill Blair said he would meet with members of the Liberal Muslim Parliamentary Caucus next week.

"We take the responsibility of keeping Canadians safe very seriously, and we are committed to doing the necessary work with our partners to ensure that is a reality for communities across the country," Mary-Liz Power said in an email.

This report by The Canadian Press was first published Oct. 16, 2020.