TORONTO — Ontario lowered the thresholds for imposing stricter COVID-19 measures under its colour-coded framework Friday in light of what Premier Doug Ford called "alarming" new projections and the looming threat of another province-wide lockdown.
Nov 13, 2020 4:44 PM By: Canadian Press 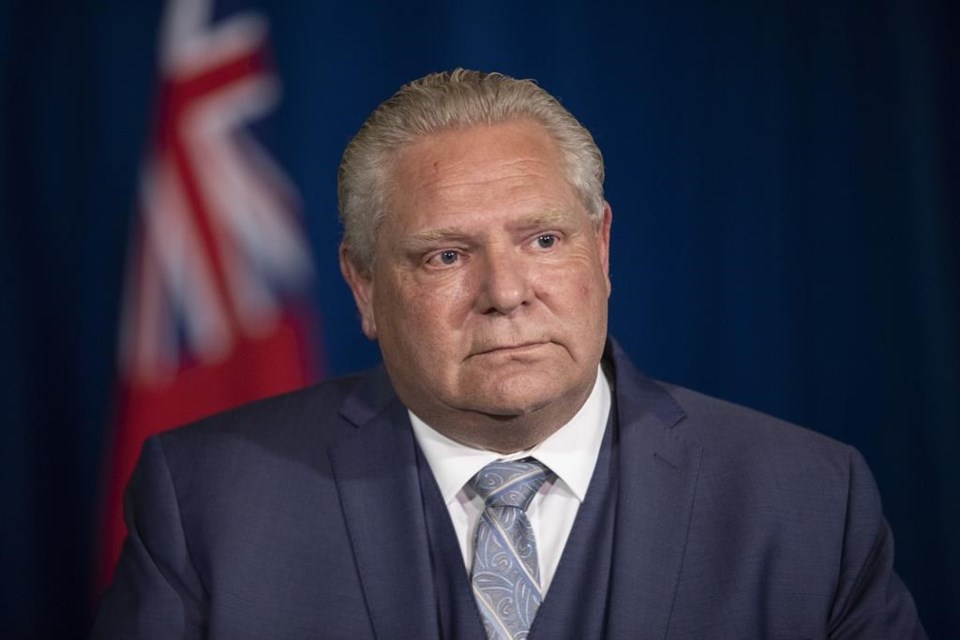 TORONTO — Ontario lowered the thresholds for imposing stricter COVID-19 measures under its colour-coded framework Friday in light of what Premier Doug Ford called "alarming" new projections and the looming threat of another province-wide lockdown.

The changes mean several regions - including Hamilton, and Halton and York regions - will move to the red alert level, the most restrictive short of a lockdown. Previously, Peel Region was the only one deemed a red zone, with Toronto set to join it on Saturday.

Another seven regions, such as Durham and Waterloo, will move to the orange alert level, and at least six more, including Windsor-Essex and Sudbury, will join the yellow alert level. The new thresholds take effect Monday.

But Ford warned the most recent modelling shows the province is "staring down the barrel of another lockdown" and said he will not hesitate to make further changes if needed.

The province's top public health doctor has been asked to provide advice next week on whether more measures are needed, Ford said.

The move comes a day after health authorities unveiled new projections that showed the province is on track to see 6,500 new daily COVID-19 cases by the middle of next month.

"We can't let that happen," the premier Friday. "We must do whatever it takes."

The province says the thresholds for the other colour levels have also been adjusted accordingly.

The tiered system has faced criticism since it was announced last week, with many health experts including the Ontario Medical Association calling it too lax. Critics have noted that, among other things, indoor dining is permitted in restaurants and bars even under the red alert level.

Some regions have announced measures that go further than the provincial system, saying it is necessary to limit contagion. Toronto announced earlier this week it will extend a ban on indoor dining and indoor fitness classes.

Asked why he waited roughly a week to adjust the system, Ford said the modelling numbers presented Thursday painted a drastically different picture of the situation than what was seen at the time the framework was created.

Friday's announcement did little to reassure some critics, who said the changes are too little, too late.

The Registered Nurses' Association of Ontario, which has called for a 28-day lockdown of everything but schools and essential services in red zones, said the province has been too slow to take decisive action.

"The longer we wait, the bigger the danger that we'll end up with a provincewide lockdown. The situation is quite close to being uncontrollable. We're waiting too long," Doris Greenspun, the association's CEO, said following the announcement.

New Democrats have also pushed for a temporary lockdown in COVID-19 hot spots - a two-week "circuit-breaker" to curb transmission.

NDP Leader Andrea Horwath said Friday the premier has shown he is  "still unwilling to do what needs to be done to crush this virus."

Liberal Leader Steven Del Duca deemed the changes to be "half-measures," and said they don't bring the province to the standards requested by doctors.

Meanwhile, some education administrators have raised concerns about the possibility of increased spread following the winter holiday break, and suggested that the first week of the new term be taught remotely.

Tony Pontes, executive director of the Council of Ontario Directors of Education, said school is set to begin Jan. 4, only a few days after New Year's Eve. "We can reasonably assume that there will be increased social contact with extended families over the break and the possibility of staff or parent travel which will contribute to higher risk," he said.

The council has spoken to the Ministry of Education and proposed starting with virtual schooling, which would allow symptoms to emerge and those affected to self-isolate, he said.

"We understand the impact this has on families but we want to be prudent and cautious as the number of cases continues to grow in our province," he said in an email.

A spokeswoman for Education Minister Stephen Lecce said Friday the government is not currently considering any modifications to the school year calendar.

"Our focus remains on doing everything we can to keep students and educators safe, while keeping schools open and students learning in person. We will continue to follow public health advice to ensure safe school environments," Caitlin Clark said in an email.

Ontario reported 1,396 new cases of COVID-19 on Friday, with 17 deaths related to the virus. That was down from 1,575 cases reported the previous day.

Health Minister Christine Elliott said there were 440 new cases in Toronto, 440 in Peel and 155 in York Region.

_ With files from Nicole Thompson