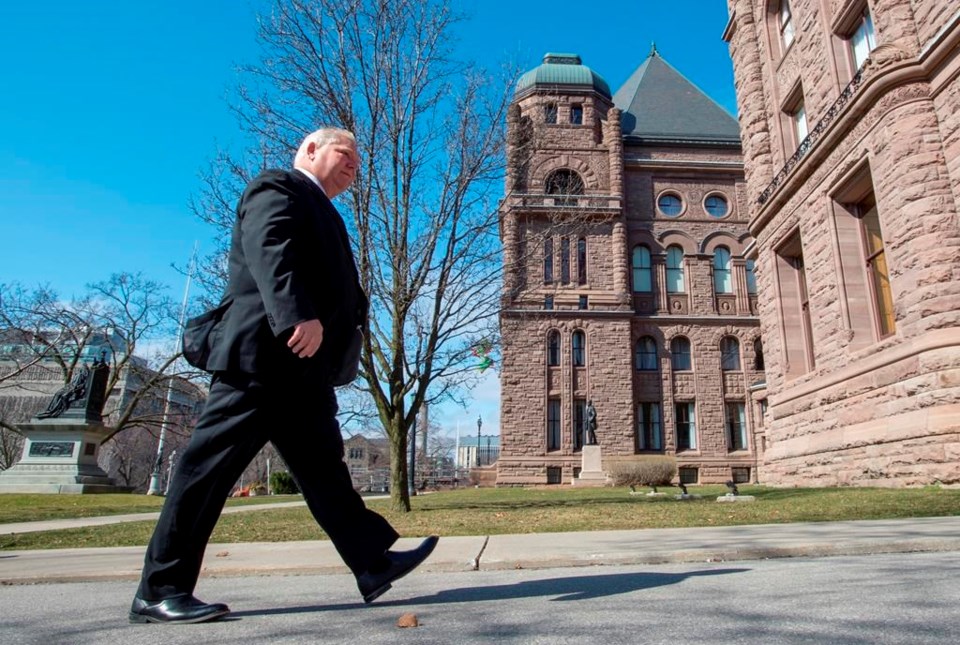 TORONTO — Ontario reported 135 new COVID-19 cases and three new deaths Friday, including two at a nursing home that local officials say is the site of the province's largest outbreak.

The provincial total of COVID-19 cases is now 993, including 18 deaths and eight people whose cases have fully resolved. One-third of the province's deaths have been long-term care residents.

Three residents at Pinecrest Nursing Home tested positive and since then, 35 other residents developed symptoms, though they have not been tested — per provincial guidelines — since the virus was already confirmed to be in the facility, said the region's medical officer of health, Dr. Lynn Noseworthy.

"This outbreak ... really brings home how devastating and deadly this virus can be for older people in our communities," Noseworthy said in a statement.

Various procedures to try to stop the spread were implemented once the outbreak was confirmed, "but given the incubation period of the virus, many staff and residents were probably already infected," Noseworthy said.

Ontario has already barred all but essential visitors to long-term care homes and is not allowing residents to come and go, but Elliott didn't say if any other measures were being considered.

No information was made available Friday about the 135 new cases, but associate chief medical officer of health Dr. Barbara Yaffe said 60 of the province's active cases are currently in hospital. There are 43 people in intensive care and 32 of them are on ventilators, she said.

Chief medical officer of health Dr. David Williams said the province has started to make progress on a backlog of pending test results. The number dropped for the first time Friday, from nearly 11,000 to just over 10,000.

Health officials said that with more lab testing sites opening and more reagent — the chemical substance needed for testing — on the way, they hope that number continues to drop. Ontario hopes to be doing 5,000 tests a day by the end of the weekend.

Meanwhile, the chair of the province's COVID-19 command table said postponing elective surgeries has freed up capacity in hospitals, noting there were roughly 400 critical care beds available Friday. The current ICU occupancy rate in the province is 68 per cent.

The province would also consider delivering care in "non-traditional" spaces, such as field hospitals and heated garages, if needed to handle a spike in COVID-19 cases, said Dr. Kevin Smith, president and CEO of University Health Network.

"All of those are on the table if the curve isn't flattened," Smith said.

Ontario has between 2,500 and 2,900 ventilators on hand, including more than 200 stockpiled for the SARS and H1N1 outbreaks, he said.

It has also ordered another 800, of which 40 have arrived, Smith said. The rest are expected to take "months, not days" to arrive given the global demand, he said.

Ontarians got emergency alerts sent to their cellphones, radios and TVs on Friday afternoon, warning recent travellers to stay at home.

"TRAVELLERS RETURNING TO ONTARIO You are at high risk of spreading COVID-19," the alert said. "You are required by law to self-isolate for 14 days. DO NOT visit stores, family or friends. Everyone should stay home to stop the spread."

Premier Doug Ford said it was the first such alert, but likely not the last.

The federal government recently passed an order requiring people arriving in Canada by land, air or sea, to self-isolate for 14 days, with penalties of up to $1 million or three years in prison.

-with files from Paola Loriggio

This report by The Canadian Press was first published March 27, 2020.

Ontario coroner calls inquest into death of teen at school for the blind
May 29, 2020 4:00 AM
Toronto mayor says he hopes investigation into woman's death will bring answers
May 28, 2020 8:02 PM

Inspectors wouldn't go into long-term care homes fearing for their safety: Ford
May 28, 2020 7:16 PM
Comments
We welcome your feedback and encourage you to share your thoughts. We ask that you be respectful of others and their points of view, refrain from personal attacks and stay on topic. To learn about our commenting policies and how we moderate, please read our Community Guidelines.