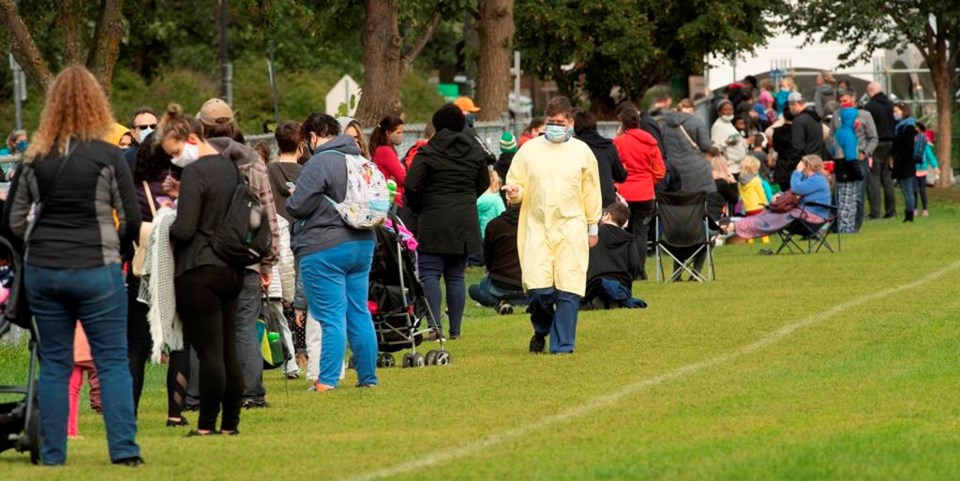 Ford said the province expects to strike a deal to allow thousands of pharmacies to provide COVID-19 testing to asymptomatic people, relieving the burden on the current 148 assessment centres, many of which have seen hours-long lineups in recent days.

He said the current assessment centres — many of which are run by hospitals — will soon focus on testing those with symptoms, once pharmacies start offering the service.

Ford also pledged a tightening of public health guidelines around social gatherings — and stiff penalties for those who break the rules — as health officials blamed the events for contributing to an increase in daily case counts.

"There's going to be some severe fines for people who want to ignore the regulations," Ford said. "They're going to be the highest in the country and they're going to be under provincial jurisdiction ... so we'll make sure that there is follow-through."

Along with fines, the government is expected to lower the current limit on social gatherings, which allows 50 people to gather indoors and 100 outdoors.

The co-ordinator of the province's outbreak response, Dr. Dirk Huyer, acknowledged there has been confusion about the rules. Even in such gatherings, he said, public health guidelines such as physical distancing and masking must be maintained.

"When you're having other people over, you're also sharing their social groups," Huyer said.

Ontario reported 315 new cases of COVID-19 on Wednesday, along with two new deaths from the virus. In recent weeks, the province has seen an increase in case levels not seen since early June.

Access to testing has also emerged as a pressing issue as people wait in long lines at centres across Ontario, and some are even turned away.

Ford said Wednesday he is aware of the problems, arguing the push to expand access to pharmacies will help as Ontario sets a new goal of conducting 50,000 daily tests — double the current average of 25,000.

"We're ramping up," he said. "We're going to have more testing areas than anywhere in the country."

Health Minister Christine Elliott said the province is also working to prevent any slow-down in processing tests by enlisting more labs to do that work.

"You have to have the testing and the labs working in tandem because it's not worth much if you can have a test done in a short period of time, but it takes you four days or a week for the results to come back," Elliott said.

NDP Leader Andrea Horwath said the government has not done enough to plan its COVID-19 response, which has led to the long lines at testing centres.

"The government is chasing this instead of having been proactive and ready for it," she said.

Green party Leader Mike Schreiner said Ford's claims about ramping up testing sounded very similar to his rhetoric earlier in the pandemic when the province lagged behind on the issue.

"It doesn't take a public health expert to predict that the demand for tests would go up when people go back to school and offices," Schreiner said in a statement. "Every day matters to stay ahead of the virus. The second wave is at our door, and the premier is playing catch-up once again."

Earlier in the afternoon, the province and the federal government said they would work together in the coming months to achieve a "surge" testing capacity of 78,000 COVID-19 tests per day.

Ford made the commitment in a letter to Prime Minister Justin Trudeau outlining how Ontario plans to use its $7-billion portion of the $19-billion federal-provincial Safe Restart Agreement reached over the summer.

In Ottawa on Wednesday, where testing centre waits have been long, Mayor Jim Watson said he shares residents’ frustrations.

Watson said the city is developing an online booking system so people can arrive for appointments rather than wait in line, and he said officials plan to select another testing site in the city’s east end in the coming days.

The mayor said he recommended to Ford that private gatherings should be limited to 10 people inside and 20 outside.

Watson also said the city plans to step up enforcement in public spaces and people who skirt public health guidelines.

"Days and hours of warnings and education have come to an end and now we’re going to start ticketing," he said.

Toronto Mayor John Tory said his city will also move in the coming days to reduce the number of people permitted in social gatherings, to enhance enforcement and to expand mandatory mask requirements.

"People are breaking their social circle of 10 people and they're becoming infected with COVID-19, often from these gatherings," Tory said. "This puts the work that we've done over the last six months ... at risk. That's the behaviour we need to change."

Meanwhile, Ontario Labour Minister Monte McNaughton said Wednesday afternoon that he and his family had been tested for COVID-19 after he had dinner with federal Conservative Leader Erin O'Toole last week.

The federal party said O'Toole, his family and some party workers are in self-isolation because one of the leader's aides tested positive for COVID-19.

McNaughton said he and O'Toole both wore masks when they met, except for when they posed for a picture together outdoors and when they were eating their meal.

This report by The Canadian Press was first published Sept. 16, 2020.

— With files from Holly McKenzie-Sutter.