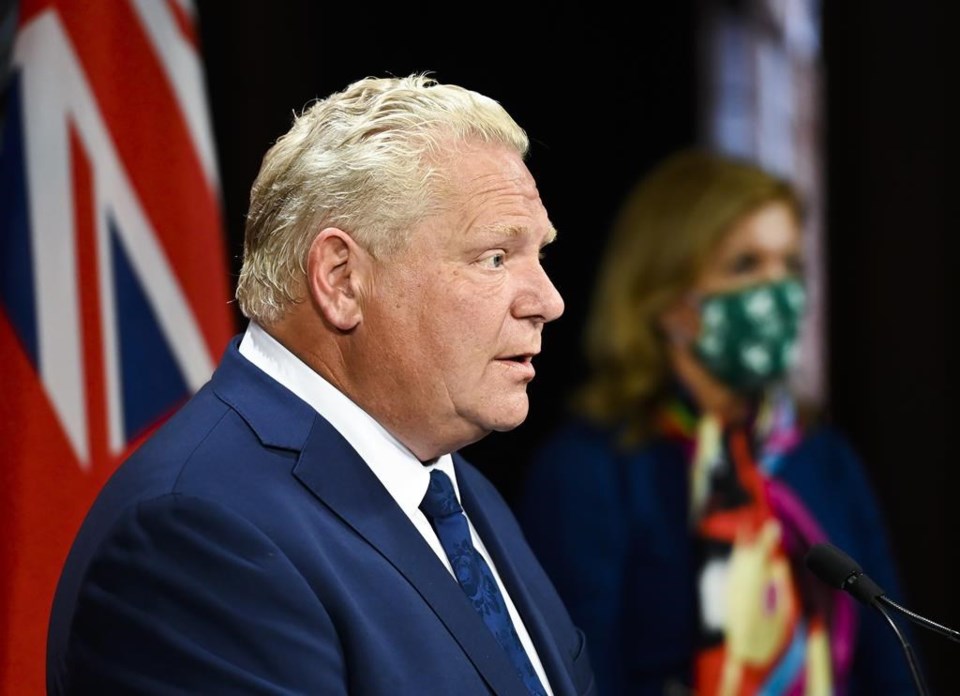 Ford's comments came a day after provincial health officials suggested the growth of the COVID-19 pandemic is slowing in Ontario, but warned the situation could quickly worsen again.

The premier said restrictions placed on Toronto, Peel Region and Ottawa on Oct. 10 were always intended to be a short-term solution to soaring case counts in those regions.

The restrictions were put in place for 28 days and, among other things, closed gyms and banned indoor dining at restaurants and bars.

The measures sparked anger among members of the business community, who have pressed Ford to produce data to justify the decision.

In an open letter to the premier, Restaurants Canada and a number of food service businesses said restaurants have had to make significant investments in safety procedures and training, personal protective equipment and other measures, yet those in some regions are nonetheless being forced to stop serving customers indoors.

They argued the move has cost thousands of jobs and further restrictions would compromise even more.

“Restaurants deserve to see the data driving decisions impacting their operations and have a chance to work with government on solutions to keep their dining rooms open,” Restaurants Canada president and CEO Todd Barclay said in a statement Friday.

The premier defended the restrictions, which were also imposed on York Region later in October.

"When you're trying to balance the health and safety of 14 million people, along with keeping the economy going, it's not easy," he said. "But I think we made the right decision."

Any easing of restrictions in the coming days would follow projections released Thursday that indicated the province is expected to settle into a range of 800 to 1,200 new daily cases for the next several weeks.

A panel of health officials said the latest modeling shows the province appears to be moving away from a worst-case scenario, but warned that things could change quickly.

NDP Leader Andrea Horwath said Ford's latest comments, in light of the latest projections, raised questions about how his government is making decisions during the pandemic.

"It's just a head-shaker," she said. "How exactly is this government making its decision? You know there's been no transparency about that. And there's also been a complete lack of communication."

Green party Leader Mike Schreiner said it was the right decision to enact additional restrictions in hot spots but that he would support easing the rules if health officials believe it can be done safely.

Still, he said in a statement, "What the data tells me is that the situation in schools, daycares and industrial workplaces could be a major blind spot for this government right now."

Across the province, 314 people are hospitalized with COVID-19, with 75 people in intensive care and 52 of them on ventilators.

Meanwhile, Ford’s office said Friday that members of his constituency staff have tested positive for COVID-19.

It said Ford has not visited the North Toronto constituency office in the past two weeks and he has had no exposure to the ill staff members.

The premier's office says the constituency office will be closed for the foreseeable future but will continue to offer services virtually.

This report by The Canadian Press was first published Oct. 30, 2020.

Montreal long-term care home sends 20 residents to hospital after COVID-19 outbreak
Nov 29, 2020 6:08 PM
One dead, one critically injured in Oshawa, Ont. shooting; no suspects sought
Nov 29, 2020 1:52 PM
Comments
We welcome your feedback and encourage you to share your thoughts. We ask that you be respectful of others and their points of view, refrain from personal attacks and stay on topic. To learn about our commenting policies and how we moderate, please read our Community Guidelines.