MONTREAL — The COVID-19 lockdown order across three Quebec regions will be extended for an additional week, Premier Francois Legault said Tuesday, adding that Quebecers shouldn't expect a return to normal before the end of June.
Apr 13, 2021 6:14 PM By: Canadian Press 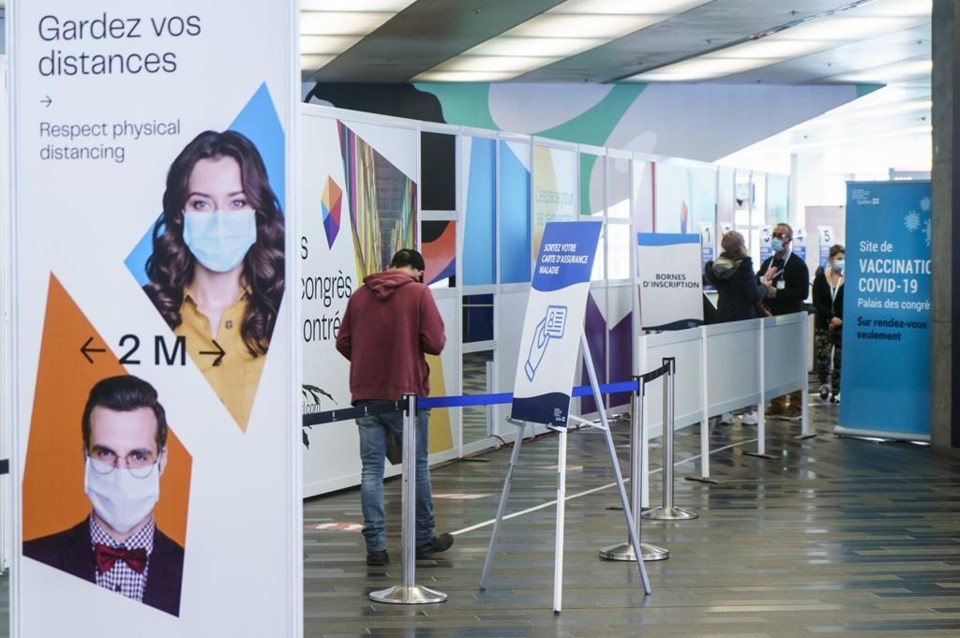 MONTREAL — The COVID-19 lockdown order across three Quebec regions will be extended for an additional week, Premier Francois Legault said Tuesday, adding that Quebecers shouldn't expect a return to normal before the end of June.

Schools and non-essential businesses will remain closed and the nighttime curfew will be at 8 p.m. until at least April 25 in Quebec City; the Chaudiere-Appalaches region, south of the provincial capital; and in Outaouais, in western Quebec.

The restrictions, which had previously applied only in parts of Chaudiere-Appalaches and Outaouais, will be expanded to cover the entirety of those two regions starting Wednesday, the premier added.

An 8 p.m. curfew will also remain in effect in Montreal and its northern suburb of Laval, Legault said, adding that for the moment, schools and non-essential businesses in those two cities will remain open.

In late March, Canada's National Advisory Committee on Immunization recommended that the AstraZeneca vaccine not be given to people under 55 because of concerns about reports of rare occurrences of blood clots in Europe.

Dr. Horacio Arruda, Quebec's public health director, told reporters Tuesday that while there is a risk of blood clots associated with every one in 100,000 doses administered, the vaccine is safe and the risk of similar health problems caused by COVID-19 is significantly higher.

"We've had 20 additional hospitalizations in two days," health network spokesman Bryan Gelinas said in an interview, adding that the number of patients with COVID-19 has been rising for around two weeks.

Around 100 surgeries a week and several hundred outpatient appointments will be postponed, Gelinas said, as staff are transferred to treat COVID-19 patients.

Earlier on Tuesday, Dube announced that more than two million doses of COVID-19 vaccine have been administered in the province. He said 25 per cent of Quebecers have received at least one dose.

People aged 60 and over across the province are eligible for the shot, and those 55 and over can get the AstraZeneca vaccine.

Legault had repeatedly said that Quebec will be able to tolerate more cases of COVID-19 once older, more vulnerable people are vaccinated. But on Tuesday, he said that due to the rising number of younger people in hospital with the disease, Quebec will not be able to start thinking about a return to normal until far more adults are vaccinated.

"The number of people under 60 years old going to hospital is increasing — it has doubled compared to the first wave," he said, adding that the situation in the province will be "tough and uncertain" until everyone is vaccinated.

He said the government remains committed to giving a vaccine to every adult who wants one by the Fete nationale holiday on June 24.

"June 24 remains the date when we can hope to start thinking about normality," he said. "We still have 73 days — 73 days and after that it will be summer."

Quebec reported 1,490 new cases of COVID-19 on Tuesday and 12 more deaths attributed to the novel coronavirus, including three in the previous 24 hours. The Health Department said the number of hospitalizations rose by 13, to 643, and 150 people were in intensive care, a rise of eight.

Quebec City reported the highest number of new cases, with 341, followed by Montreal with 300.