MONTREAL — Quebec is making masks mandatory for all public transit users, but Premier Francois Legault says police will not enforce the new rule and those who refuse to wear them won't be fined.
Jun 30, 2020 3:16 PM By: Canadian Press 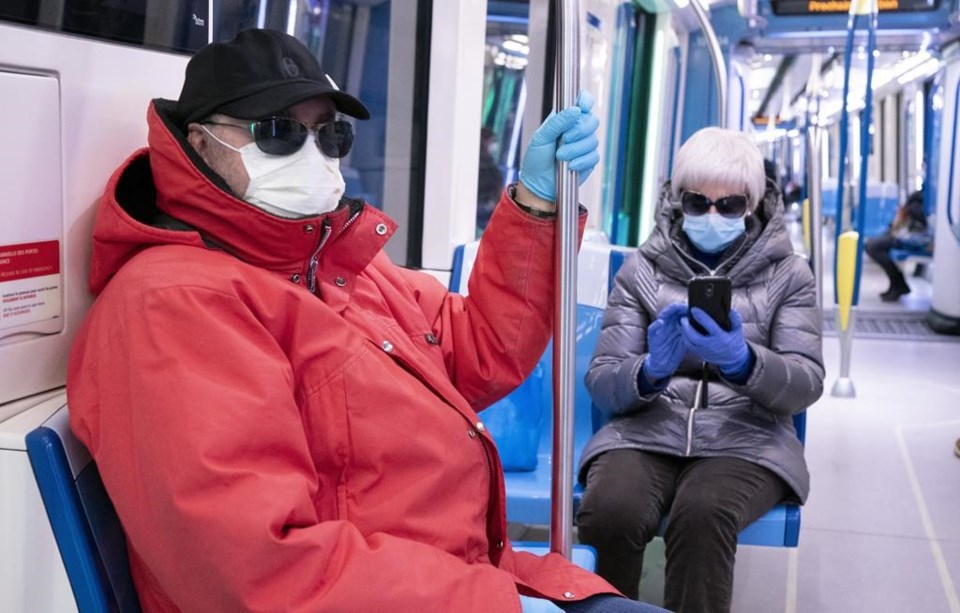 MONTREAL — Quebec is making masks mandatory for all public transit users, but Premier Francois Legault says police will not enforce the new rule and those who refuse to wear them won't be fined.

Instead, Legault told reporters Tuesday in Montreal, employees of the various public transit agencies across the province will be responsible for enforcing the directive.

He also suggested a mixture of public shaming and the honour system will be enough to ensure transit riders are covering their face to stop the spread of COVID-19.

The new rule comes into effect July 13. Following a two-week grace period ending July 27, anyone without a mask will not be permitted onto a public transit system anywhere in the province.

"There are no fines," Legault said. "The only negative consequence will be that you won't have access. We expect the various transit agencies to apply the rules."

Legault said he was also counting on Quebecers to be responsible and respectful of others.

"Just saying it's mandatory sends a message," he said, adding that transit riders can also police themselves. "A citizen can tell another citizen it's mandatory to wear a mask."

The union representing roughly 4,700 of Montreal's bus and subway employees — which had been calling for months to make masks mandatory for transit users — indicated it wasn't fully on board with the government's plan.

"However, our members won't be playing mask police," Leroux said. "It's not up to our members to manage who has a mask and who doesn't, nor to limit access to public transit."

Legault said bus drivers, for instance, don't let people on board without paying a fare, and the same principle should apply for masks.

Health Canada says COVID-19 is spread through respiratory droplets from infected people when they cough, sneeze, speak or laugh — including by those who may be asymptomatic. Wearing a mask, authorities say, can help block infected droplets from coming into contact with non-infected people.

Health officials in Quebec have strongly promoted wearing a mask in situations where physical distancing isn't possible, but had resisted making them mandatory for a number of reasons, including availability of masks.

But Legault said the province is in a different phase now.

The province has largely reopened, Legault said, adding there are more people taking public transit. Legault also pointed to U.S. states such as Florida and Texas, which have witnessed a sudden increase in COVID-19 cases as they reopened bars and restaurants.

Any transit user over the age of 12 will be required to wear a mask, while it is "strongly recommended" that children between the ages of two and 12 wear one, he said.

Children younger than two years old, however, should not wear a mask on public transit because it could be dangerous for their health, said Legault.

Both Legault and Dr. Horacio Arruda, director of public health, said they have not ruled out making masks mandatory in other public areas, including stores.

Arruda said the government wanted to proceed "gradually," and any new rules will be imposed as a function of the rate of COVID-19 infection in the province.

Quebec reported 68 new cases of COVID-19 Tuesday along with 18 more deaths — seven of which occurred in the previous 24 hours. The province now has reported 55,458 infections, including 24,798 cases considered recovered, as well as a total of 5,503 deaths attributed to the novel coronavirus.

This report by The Canadian Press was first published June 30, 2020.

Police say Pat Musitano fatally shot in Burlington, Ont., another man wounded
Jul 10, 2020 8:06 PM
Police charge two Toronto women in death of former warlord in London, Ont.
Jul 10, 2020 6:54 PM
Funding for northern Ontario First Nations harm reduction greenlit by government
Jul 10, 2020 5:53 PM
Comments
We welcome your feedback and encourage you to share your thoughts. We ask that you be respectful of others and their points of view, refrain from personal attacks and stay on topic. To learn about our commenting policies and how we moderate, please read our Community Guidelines.