Quebec may ease COVID-19 restrictions in some regions as of Feb. 8, Legault says

MONTREAL — Quebec plans to ease COVID-19 restrictions in some regions as of Feb. 8 if the situation in the province continues to improve, Premier Francois Legault said Tuesday.
Jan 26, 2021 5:51 PM By: Canadian Press 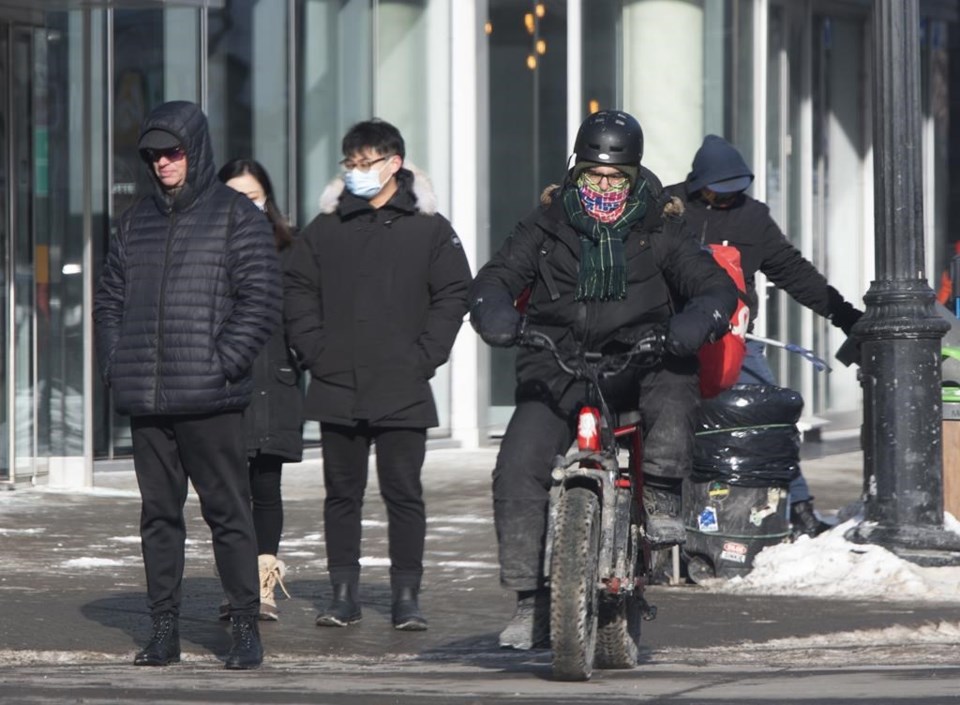 MONTREAL — Quebec plans to ease COVID-19 restrictions in some regions as of Feb. 8 if the situation in the province continues to improve, Premier Francois Legault said Tuesday.

Legault said the average number of new cases in the province has declined in recent weeks — something he credits to government measures that include a nighttime curfew.

The premier said he would announce more details next week, but he said the Montreal region was likely to be kept under a higher tier of restrictions than other areas of the province.

The government has introduced a series of measures aimed at curbing COVID-19 in recent weeks, including closing non-essential businesses, requiring those who can to work from home and imposing an 8 p.m. to 5 a.m. curfew.

The curfew was originally set to expire Feb. 8, but Legault implied that Quebec's biggest city should be prepared to endure strict measures for longer. "Everyone sees the situation is much different in greater Montreal than what we're living in the rest of Quebec," Legault told reporters.

In the last few weeks, the average number of new cases in the province has gone down, from an average of about 2,500 a day to about 1,500, Legault said.

But he said hospitalizations are still too high, especially in Montreal. Currently, there are more than 1,000 people hospitalized with COVID-19 in the city, and more than half of surgeries are delayed, he said.

Health Minister Christian Dube said the decision for each region would be based on a combination of factors, including case numbers, hospitalizations and outbreaks.

He did not rule out roadblocks or other measures to stop people from travelling between regions to take advantage of softer rules, but said a balance will need to be found to ensure people can still travel for necessary reasons and that police aren't overworked.

Horacio Arruda, the province's director of public health, said the situation in the province remains "unstable" and the progress made in recent weeks could easily be derailed by the spread of a new variant or a population that eases off on following public health directives.

"We can’t think in the next weeks, 'That's it, we’ll go back to normal,'" he said. "That’s the most dangerous thing that threatens us."

Citing the danger posed by new variants, Legault expressed frustration with the federal government's failure to announce any new concrete restrictions for travellers, such as mandatory quarantine in supervised hotels or banning non-essential trips altogether.

"We're in a little bit the same situation as the beginning of March of last year, where we have a little bit of trouble with Mr. Trudeau for him to act quickly to prevent travellers from coming to infect the population of Quebec," Legault said.

Arruda said he was also considering imposing restrictions on interprovincial travel, with his counterparts in other provinces, in order, he said, to limit the spread of the new variants, one of which has already begun to circulate in Ontario.

"There is federal, provincial and territorial discussion on that issue, especially in the context of the new strains," he said. Arruda said limiting travel inside the country was more difficult than sealing external borders, but that the restrictions imposed by the Atlantic provinces prove it's not impossible.

Quebec reported 1,166 new cases of COVID-19 and 57 more deaths attributed to the novel coronavirus on Tuesday, including four that occurred in the past 24 hours.

Health officials said Tuesday that hospitalizations rose by three, to 1,324, following six consecutive days of decreases in the number of COVID-related patients. The number of people in intensive care remained stable at 217.

Officials said they administered 5,927 doses of vaccine Monday and said they had used all but 13,221 of the doses received thus far.

Dube said the province passed the milestone of vaccinating 225,000 people — about two weeks ahead of schedule — but that the ongoing delay in shipments from manufacturer Pfizer would inevitably cause slowdowns.

This report by The Canadian Press was first published Jan 26, 2021.