MONTREAL — Quebec's economic recovery plan unveiled Tuesday aims to reopen the province's retail, construction and manufacturing sectors by mid-May, allowing roughly 500,000 people who had been temporarily laid off during the pandemic to return to wo
Apr 28, 2020 6:11 PM By: Canadian Press 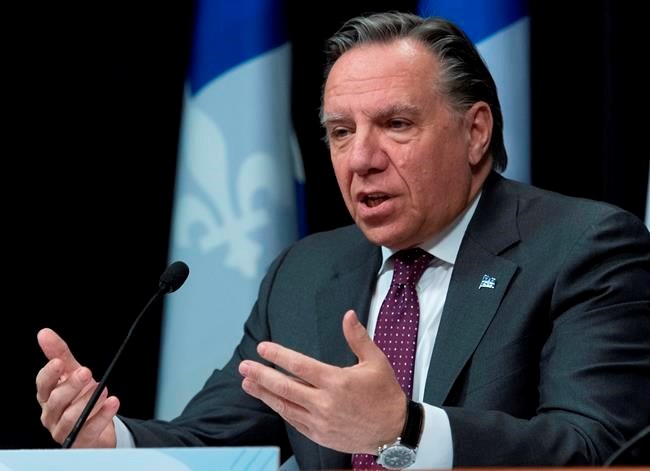 MONTREAL — Quebec's economic recovery plan unveiled Tuesday aims to reopen the province's retail, construction and manufacturing sectors by mid-May, allowing roughly 500,000 people who had been temporarily laid off during the pandemic to return to work.

Despite the fact Quebec has more than half of Canada's total number of deaths related to COVID-19 and continues to record hundreds of new cases per day, Premier Francois Legault said the pandemic — outside long-term care homes — "is under control."

"Our challenge is to gradually restart the economy without restarting the pandemic," Legault told reporters in Quebec City.

Under his government's plan, stores outside Montreal can reopen next Monday while those in the greater Montreal region will reopen May 11. Stores in shopping malls will remain closed, unless they can be accessed from outside.

The construction industry will completely reopen starting May 11, while manufacturing companies can resume operations the same day, with initial limits on the total number of employees who can work per shift.

All businesses that reopen will be required to follow guidelines put in place by the province's workplace safety board, which will monitor and enforce the directives.

Quebec's top doctor, Horacio Arruda, remained sanguine even as he gave reporters a dose of reality about the risks associated with gradually reopening the economy.

"It's clear ... there will be an increase in transmission in the community as soon we open a little," said the province's director of public health. "There could even be deaths."

But health authorities will monitor the rate of infection, he said, adding that if they feel they are beginning to lose control of the contagion they will order businesses to shut their doors once again.

The question, Arruda explained, is how the province balances the risk of infection with the risks associated with confining millions of people and shuttering businesses for many more months.

"There are other determinants of public health in a society other than infectious disease," Arruda said, citing divorce, child abuse and even suicide.

Authorities, Arruda continued, don't want to keep everything closed until September and then reopen when the regular flu season comes.

"We are taking people who maybe will catch (COVID-19), but whose lives will be less affected by it," he said. "Some people will be asymptomatic, others might need to be hospitalized. I hope not too many people will die."

Economy Minister Pierre Fitzgibbon said 1.2 million Quebecers have had to temporarily stop work since the province was put "on pause" last month to slow the spread of the novel coronavirus. The three sectors scheduled to reopen will permit roughly 500,000 people to return to work, he said.

The situation is stabilizing in most regions, Fitzgibbon added, and the measures announced Tuesday were drafted in consultation with organizations responsible for public health and worker safety. Fitzgibbon warned that if COVID-19 trends worsen, he won't hesitate to restore the restrictions.

Quebec's workplace safety board has created a series of guides for how businesses in retail, manufacturing and construction can safely reopen. Legault said the agency will be responsible for ensuring that businesses comply with the health and safety directives, but the premier did not give details on fines or other penalties that could be incurred.

The province's business community rejoiced at Tuesday's news. Labour unions were supportive yet cautious, saying they wanted employers to be held accountable for ensuring safe workplaces.

"We cannot fail, because no one wants to be responsible for a second wave of contagion," said Pierre Brassard, president of CSN-Construction, a major union in Quebec.

"In some cases, such as in the food, manufacturing and construction sectors, companies will have to completely reorganize and renovate their workplaces as well as their production lines," he said.

Quebec's recovery strategy for businesses came a day after Legault announced elementary schools and daycares across the province would be reopened by May 19.

The province has reported 25,757 cases of COVID-19 to date and 1,682 deaths. Sixty-five per cent of those deaths came from people who were living in long-term care homes, which continue to struggle with controlling the contagion.

A new poll conducted by Leger in partnership with the Association for Canadian Studies indicated francophone Quebecers are less fearful of getting COVID-19 than are other Canadians. The web poll, which surveyed 2,015 Canadians between April 24 and 26, revealed 52 per cent of francophone Quebec respondents said they were not afraid of catching the virus, compared with 42 per cent of all respondents.

This report by The Canadian Press was first published April 28, 2020.

OPP commissioner defends officers' conduct at site of Indigenous land dispute
Oct 26, 2020 11:45 AM
Comments
We welcome your feedback and encourage you to share your thoughts. We ask that you be respectful of others and their points of view, refrain from personal attacks and stay on topic. To learn about our commenting policies and how we moderate, please read our Community Guidelines.