'You can feel the pain': families of those killed by police support each other

BRAMPTON, Ont. — Members of a club no one wants to be a part of gathered Sunday at a barbecue in Brampton, Ont., to celebrate the lives of family members killed by police — and to demand justice.
Aug 23, 2020 5:08 PM By: Canadian Press 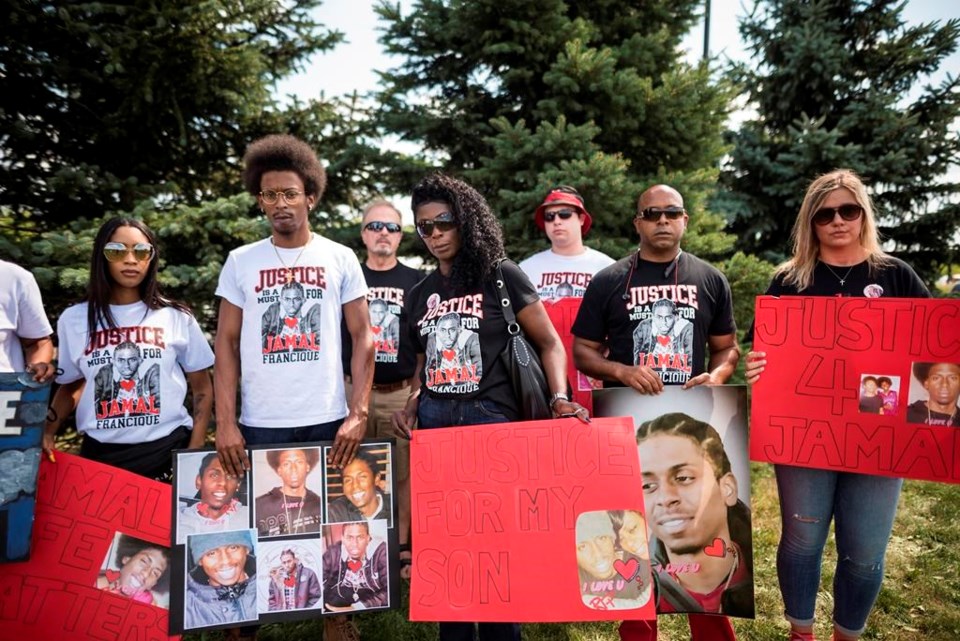 BRAMPTON, Ont. — Members of a club no one wants to be a part of gathered Sunday at a barbecue in Brampton, Ont., to celebrate the lives of family members killed by police — and to demand justice.

A few dozen people huddled under tents to hide from the afternoon sun that beat down as kids played in a nearby splash pad and a cricket game got underway in otherwise barren sports fields.

"I feel happier for the support for all of us, because what we're going through is difficult," Yvonne Campbell said softly through tears.

Her son, 26-year-old D'Andre Campbell, was shot and killed by Peel Regional Police on April 6 in the family's home. The Campbells said the young Black man called 911 on himself that day, but they do not know why.

He lived with schizophrenia, and the family said they had called police a few times before when he was struggling, in order to get him to the hospital. But they said he was not a danger to anyone that day.

"I'm looking for justice for my son because the way my son was taken away from me was very difficult for all of us," Yvonne Campbell said.

Anne Marie White carried around a photograph of her son, Jamal Francique, who was shot and killed by Peel police on Jan. 7.

"It's overwhelming, it really is," she said, too emotional to talk further about her boy.

Francique's family said the 28-year-old lived with schizophrenia and bipolar disorder and was unarmed when he was shot in the back of the head while in his car.

The Special Investigations Unit, which probes police-involved deaths and injuries, said officers were planning to arrest Francique when the shooting occurred.

His father, Derek Francique, said the death has torn his family apart. He said he often thinks about suicide, but does not act on those impulses so he can be there for his other kids and his grandchildren — Jamal Francique was a father of two.

"Shortly after he died, my grandchildren dealt with it by making snow angels and saying 'that's Daddy now,'" Derek Francique said.

He said his son was the type of person to help people, not hurt them, adding that he still doesn't understand what happened between police officers and his son that January day.

"My son was a special boy, my son was a bright star, any room that he went into, he was shining," Derek Francique said.

Peter Korchinski struggled to speak about his daughter, Regis Korchinski-Paquet. The 29-year-old died on May 27 after falling from a 24th-floor balcony in Toronto while police officers were in the home.

"I wanted to let the public know how much of a joyous and optimistic person she was," Korchinski said. "She would never jump from 24 floors."

The SIU continues to examine all three deaths. SIU spokeswoman Monica Hudon said the files of both D'Andre Campbell and Jamal Francique are now with the agency's director for review, which means the probes are near completion.

The SIU said last month field work had been completed for Korchinski-Paquet's investigation.

And though they're still waiting for answers, there was some solace Sunday in the support the families gave each other.

"It's nice being here with the families even though it's really hard because you can feel the pain and the hurt," Korchinski said, "and it's real."

This report by The Canadian Press was first published Aug. 23, 2020.

COVID-19 pandemic damaging the mental health of young Montrealers: survey
Oct 21, 2020 5:27 PM
Critics say move to scrap ranked balloting undermines municipal democracy
Oct 21, 2020 5:23 PM
Comments
We welcome your feedback and encourage you to share your thoughts. We ask that you be respectful of others and their points of view, refrain from personal attacks and stay on topic. To learn about our commenting policies and how we moderate, please read our Community Guidelines.