Officers busy dealing with speeders, overdoses and violence while keeping health and safety in mind
Oct 21, 2020 4:07 PM By: Arron Pickard 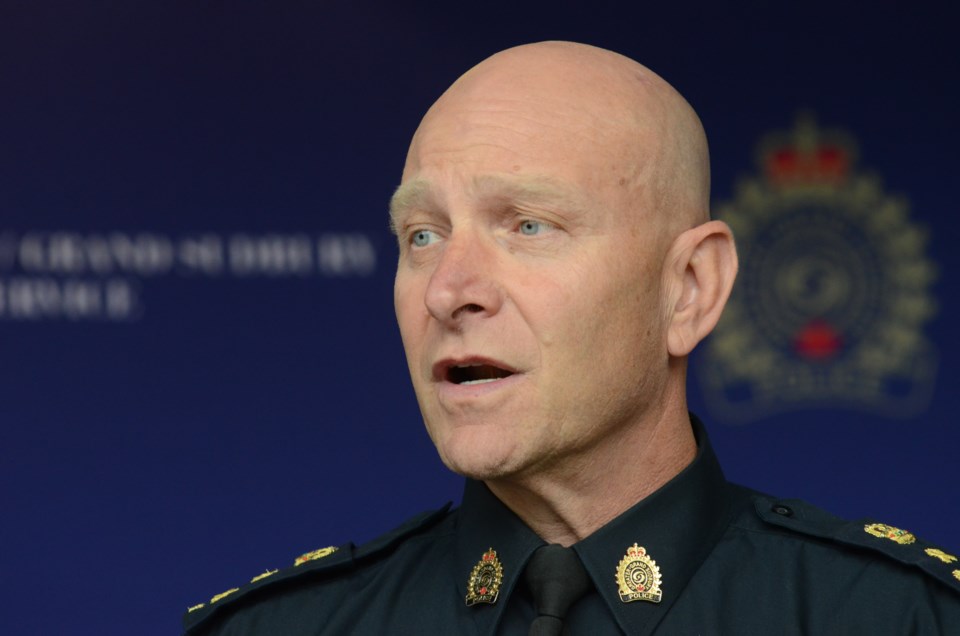 Greater Sudbury Police Chief Paul Pedersen said the pandemic continues to present a challenge to police, but it also is affecting people in vulnerable positions. (File)

It may come as little surprise, but the COVID-19 pandemic continues to have a significant impact on policing in Greater Sudbury.

“These are challenging times for people in our profession, and the health and safety of our members has to be the foundation,” said Police Chief Paul Pedersen, who provided an update on the service’s strategic direction during the monthly Police Services Board meeting. “It has been a unique year with COVID-19 and an entire host of community tensions, such as the opioid crisis, but our vision and mission remains the same. There are many complex issues we are dealing with, and only collaboratively with other agencies can we deal with them.

“Our strategic direction has not been taken off course (as a result of the pandemic). We’re on a good path, progressing forward, and as chief, I’m proud of the work our members do day in and day out.”

A downtown action team is being formed on the heels of the meeting with Greater Sudbury Mayor Brian Bigger and Chief Medical Officer of Health Dr. Penny Sutcliffe earlier this week. “While we already have resources downtown, it’s quite clear that right now, at this point in time, we need to put even more resources downtown,” Pedersen said. “We are bringing resources from other areas of the organization and putting this together with the goal being prevention, intervention and enforcement. That will be part of our role as part of the action team, and we are going to see if we can’t be part of the solution.”

In a joint statement issued Oct. 16 by Bigger Sutcliffe and Pedersen, the chief said calls for service to downtown had dropped 20 per cent since March and violent crimes were down 37 per cent. While violent crime has dropped, despite the recent stabbings, property crime in the downtown is up, Pedersen said.

Being a vulnerable person isn’t a licence to break into properties.

“There’s no question the recent violence in the downtown is concerning,” he said.

The victims in these two incidents are vulnerable persons, and the accused in both these cases are dealing with their own challenges.

He is asking the public to look at the people downtown and to try and understand they are dealing with their own challenges, and have a little bit of empathy. Many of the shelters and other locations these individuals could go to now have restrictions or aren’t open at all, so they are further displaced, he said.

“COVID has had a different impact on those with privilege than those without privilege, and those without privilege are being impacted even further,” he said. “Where they might have had beds and shelter before, they aren’t there any more. Where they might have had jobs before, those jobs don’t exist anymore. That’s where we have to look at a person sleeping in a doorway as a human being rather than a threat to our own safety.”

From a monetary perspective, unbudgeted spending as a result of the pandemic is just under $425,000, and the greatest area of cost has been in cleaning/decontamination efforts, personal protective equipment, as well as technology like computers to facilitate remote work arrangements.

With the increased use of masks, it is anticipated that PPE costs will continue to be incurred as year-end approaches. A year-end forecast of approximately $500,000 is expected.

October has been a very busy month for police, said Deputy Chief Sheila Weber. Officers dealt with one homicide, an attempted murder and a barricaded individual, all of which happened within two weeks of each other.

“We are at a unique period in time where normal activity we see in the downtown is not possible,” said Pedersen.

The lack of people venturing into the downtown for such events as Ribfest or concerts means police are seeing evidence of vulnerable people in every corner of downtown, said Pedersen.

Crime stats (a lot of stats)

On the roads, the traffic management unit continues to respond to an increasing number of speeders in and around Greater Sudbury.

One of those drivers was a G2 driver who was charged with impaired, dangerous operation and stunt driving after being caught travelling at 151 km/h in an 80 km/h zone.

Maley Drive continues to be a hotspot for stunt driving offences. On Oct. 3, five drivers were charged with stunt driving, with the highest speed being 62 km/h over the posted speed limit.

Over the long weekend in October, officers charged 12 people with stunt driving, with the highest speed captured at 186 km/ in a 60 km/h zone and involving a two-vehicle race.

Furthermore, disputes between landlords and their tenants are up 158 per cent.

In September, the service completed its second largest destruction of weapons in the last five years.

The opioid overdose epidemic is a significant public health and criminal law problem confronting Ontario. The number of opioid deaths has risen rapidly in Ontario from 111 per year in 2000, to 1,535 in 2019. The number of deaths has continued to rise since public health measures were enacted in response to the COVID-19 pandemic.

In September, officers in Sudbury attended the area of Medina Lane to assist with an apparent overdose.

A man had injected purple heroin and was no longer breathing.

Bystanders had administered four doses of Narcan prior to police arrival. Officers began chest compressions for a total of seven minutes.

Another Narcan dose was administered and the man regained consciousness with no recollection of what happened.

EMS arrived on scene shortly thereafter and brought the male to HSN.

One of the 911 calls resulted in officers being dispatched to a break and enter in progress where the suspect entered a residence while the family was at home.

A child encountered the suspect and was terrified by the intrusion. The officers ensured the children’s safety by advising them their home had been thoroughly searched.

The suspect was subsequently arrested by the officers.

The man was wanted for 38 criminal charges related to human trafficking, firearms and domestic violence offences. He has been returned to the Toronto Police Service to answer to the charges. A second man, from Greater Sudbury who was also inside the vehicle was found to be in possession of cocaine and was charged accordingly.

Officers also investigated a weapons complainant on St. Charles Street after a 30-year-old man was allegedly stabbed by a woman known to him.

The victim had invited the woman into his residence where she consumed an unknown amount of drugs and passed out, said police. When she awoke, she became upset that her drugs were finished, blamed the victim, and allegedly attacked him with a knife.

The victim was taken to hospital where he was admitted overnight with two puncture wounds to his upper right thigh that would require surgery but not deemed to be life threatening.

The woman was charged with assault with a weapon, possession of a weapon for a dangerous purpose, aggravated assault, failure to comply with a release order and breach of recognizance.