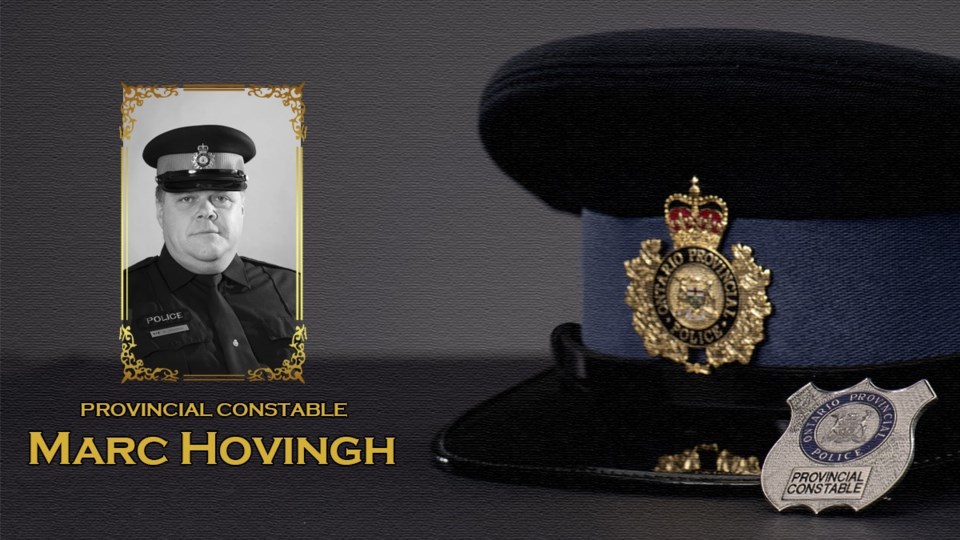 28-year OPP veteran Provincial Cst. Marc Hovingh succumbed to his injuries he sustained in an incident in Gore Bay.

"With great sadness I advise that PC Marc Hovingh, a 28-year veteran of the OPP, has succumbed to his injuries sustained while bravely serving in the line of duty," said Carrique in a tweet.

"Our hearts are with his family, friends and colleagues at this time."

Media reports out of Manitoulin Island have indicated that one officer has been shot and a suspect was wounded in a dramatic event that just unfolded near the Tenth Line, just east of the East Bluff, in Gore Bay on Thursday, Nov. 19.*

The Manitoulin Expositor reports that an officer was shot during an investigation at a trailer near the Tenth Line.

The suspect was also wounded in the operation and has been apprehended. The extent of the suspect’s injuries are not known at this time, but there are no other suspects in the matter.

ORNGE air ambulance as well as ground EMS teams have taken the injured parties to hospital.

Provincial police on Manitoulin Island are advising the public to stay away from the area of Scotland Road, Hindman Trail and 10th Road in Gore Bay.

There is a heavy police presence in that area, said the OPP in a tweet. Officers are investigating a serious occurrence, but there are no further details at this time.

More information will be released once available.

*Early reports indicated two officers had been shot in the incident. However, as more information became available, that early reporting turned out to be in error. The story has been updated  to reflect the latest information.