Barbara Ronson McNichol and her husband Clyde were fighting to stop logging on the Benny Forest
0
Mar 23, 2017 3:42 PM By: Sudbury.com Staff 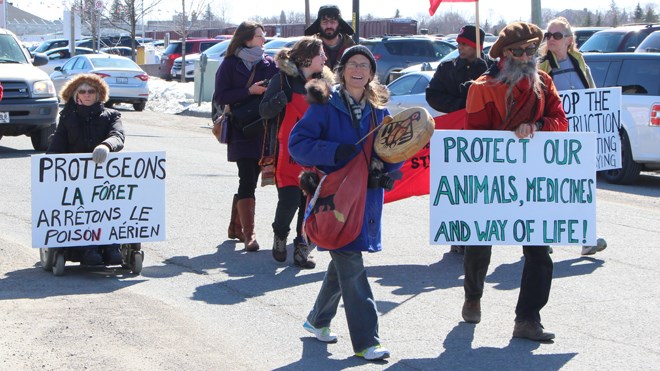 A woman who has been fighting for the past several years to prevent forestry companies from logging on the Benny Forest has been identified as the pedestrian who was killed after being struck by a train in Moncrieff Township yesterday. Sudbury OPP have identified Barbara Ronson McNichol (pictured in the blue coat) as the victim. (File photo)

A woman who has been fighting for the past several years to prevent forestry companies from logging on the Benny Forest has been identified as the pedestrian who was killed after being struck by a train in Moncrieff Township yesterday.

Sudbury OPP have identified Barbara Ronson McNichol as the pedestrian who was killed after being struck by a train on the CP rail line on Highway 144 in Moncrieff Township. The incident closed Highway 144 for several hours on Wednesday.

"The investigation is ongoing, but I can tell you that foul play is not suspected," Const. André Taschereau of the Sudbury OPP told Sudbury.com this afternoon.

For the past several years, Ronson McNichol and her husband, Clyde, who operate Camp Eagle's Nest on the Benny Forest have been fighting to protect the area from logging.

Sudbury.com has reached out to Camp Eagle Nest by phone today without success.

She was released from jail Tuesday on a promise to appear and was due in court April 5.

The McNichols founded Camp Eagle Nest in 2012. Located in what the couple has said is Clyde's family's ancestral land in Benny, a 15-minute drive north of Cartier, the facility is a wilderness and arts camp for children and youth that focuses on First Nations cultural teachings, outdoor activities and employment training.

It is operated by the McNichols and a four-person board of directors, which includes Art Petahtegoose, the former chief of Atikameksheng Anishnawbek First Nation.

Since April, 2015, the couple have been fighting an uphill battle to prevent forestry giant EACOM from logging within a 32-kilometre radius of Camp Eagle's Nest.

The couple has been arguing with the Ministry of Natural Resources and Forestry for several years that, because the area surrounding Camp Eagle Nest is part of Clyde McNichol's family's original hunting territory, the government and the company had a duty to consult and survey the area before okaying the harvesting of trees.

Nickel Belt MPP France Gélinas has supported the couple in their fight. The Save the Benny Forest group the couple started has staged several demonstrations at the site and in Sudbury.

The couple has argued that under the 1850 Robinson Huron Treaty, the Crown has a duty to complete a survey of the area to protect areas of cultural importance to his family, namely graveyards where Clyde has said his ancestors are buried.

The McNichols also say the 32-kilometre radius is necessary to preserve habitats of the plants and animal species in the region.

Back in January, the couple started a land claim process on behalf of Clyde, his family and former chief Petahtegoose, but the McNichols said the process was costly and too slow to protect the forest. Clyde also planned to travel to London, England, to seek support for his land claim and get support to create a conservation reserve though the Queen's Commonwealth Canopy Project.

Previously, the couple tried to get an injunction to stop both logging on the land and the use of defoliant, but failed.