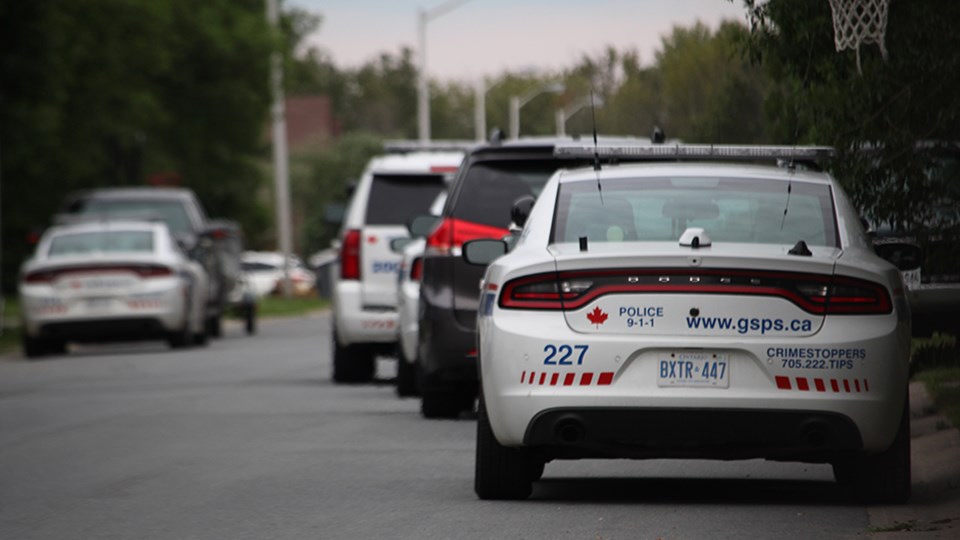 Greater Sudbury Police on the scene of a mental health crisis in Chelmsford. (Keira Ferguson/ Sudbury.com)

Greater Sudbury Police announced through Twitter at 6:54 p.m. that the issue had been resolved safely.

Keith Avenue has been reopened to traffic.

Greater Sudbury police remain on the scene of a mental health crisis on Keith Avenue in Chelmsford and intend to stay there until a resolution with the individual in question.

At the time of this writing, there have been no injuries sustained by officers or bystanders in the area, but whether or not the individual in crisis suffered any self-inflicted injuries could not be confirmed.

The individual remains in her home, the exits of which are all being supervised. Neighbours and nearby residents, however, are still being asked to stay indoors until further notice.

“The one thing that’s most important is the safety of all involved, including the subject,” said GSPS Staff Sgt. Daryl Adams in an interview with Sudbury.com.

“We don’t want to press the situation - we want to have a safe, successful resolution. Ideally, someone to come out, and we can take that person to the hospital for the help that they need.”

Police were called to the neighbourhood co-op around 11:30 a.m. Saturday morning in response to reports that a woman was damaging vehicles in the area with a baseball bat, said Adams.

Further investigation into this mischief is ongoing, he said, as well as that related to charges of assaulting an officer. But despite the criminal aspect of this incident, the well-being of the individual considered emotionally disturbed remains officers’ top priority.

No word on the use of a knife or threat with a knife has been brought to the staff sergeant’s attention, he said but added that it could have occurred given the nature of the incident at hand.

Adams said that around 14 officers have been called to assist in de-escalating the situation, some of which were at home, but had the skills he said are critical in times like this.

Included in what he considers a large police response, are two sworn officers he said are trained in crisis negotiation.

The city's Crisis Unit and Mobile Crisis Unit were both contacted for assistance, he said, but neither had the resources to attend.

Negotiation remains the primary tactic, said Adams, but there is equipment on-site should forced entry be necessary.

“We will not force the situation. We are not going to push this to save money. We will take all the time necessary for someone’s health and wellbeing.”

Adams could not confirm whether this individual is the same woman that was brought to Health Sciences North late last week, but said police have had previous interactions with the party in question.

An update will be issued once the roadway is reopened.

Greater Sudbury Police have closed a portion of Keith Avenue while a team of officers, including tactical units, respond to what they described earlier today as a person in crisis.

Police have not yet elaborated on what led them to be called to the private residence Saturday.

Neighbours told Sudbury.com the person in crisis is the same woman who was brought to Health Sciences North last week after she was reportedly found standing on the top of a rented storage container while intoxicated.

She has since been asked to leave the co-op in which she resides, essentially evicted, the development's maintenance manager told Sudbury.com.

Police believe there to be no threat to public safety at this time, but once again ask that the area be avoided, to further reduce the risk of injury.

Greater Sudbury Police are currently stationed at a residence on Keith Avenue in Chelmsford, to assist a person in crisis.

Residents have been asked to avoid the area and refrain from posting any photos or information related to the incident "as it may jeaporardize officer safety."

Officers currently on Keith Street Chelmsford, deployed and attempting to assist a person in crisis. If you see police personnel or vehicles please remain away from the area and refrain from posting info online as it may jeopardize officer safety. ^DRA