Steelworkers Hall goes up in flames

UPDATED: Some people living in homes along College Street neighbouring the Steelworkers Hall have been evacuated because of smoke in the air. The fire appeared to be contained this morning, but later started up again.
Sep 19, 2008 4:29 PM By: Sudbury.com Staff 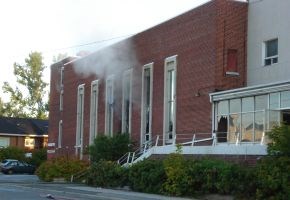 The Greater Sudbury Police Service has made two arrests in connection with the fire that destroyed the Steelworkers Hall on Sept. 19.

UPDATED: Some people living in homes along College Street neighbouring the Steelworkers Hall have been evacuated because of smoke in the air. The fire appeared to be contained this morning, but later started up again.

The Greater Sudbury Fire Service is holding a media conference about the fire at 3 p.m. Check back to Northernlife.ca for more updates.

UPDATED: As of 12:10 p.m., portions of Frood Rd, Adie St, College St and Landsdowne Ave. are still closed and traffic is being re-routed.

Emergency vehicles require quick access to the scene, therefore traffic is asked to remain away from the area until further notice.

The smoke is also affecting air quality, therefore pedestrians are also urged not to get close to the scene.

BY LAUREL MYERS AND HEIDI ULRICHSEN

John Fera stood on the sidewalk at the foot of the Steelworkers Hall on Friday morning, watching in devastation as the “Sudbury icon” crumbled under flames.

Just after 2 a.m. Friday, fire alarms went off at the Steelworkers Hall, at 95 Frood Road. According to Fera, the president of the United Steelworkers (USW) Local 6500, firefighters were on the scene immediately.

“When we got here, the place was pretty well on the way,” he said.

Smoke was still wafting out of the banquet hall area well into Friday morning, and several windows were shattered.

The block of streets bordering the hall — Frood Road, College Street, Adie Street and Lansdowne Avenue — were all barricaded to traffic.

“This building is such an important part of the history of Sudbury,” Fera said. “We've been here a long time and everybody in Sudbury, I think, has been through this building for a wedding or another function.

“It's difficult to be here this morning to see this.”

The extent of the damage is not yet known, nor is the cause of the blaze.

“There's a fair amount of fire damage to our banquet room side and a lot of smoke damage on the office side,” the president said, adding the USW will be looking for a new building to work out of.

“We will be having a meeting to discuss how we move forward, where we go,” he said.

The Steelworkers Hall is a popular venue for wedding receptions in the Sudbury area, and a number of weddings had been booked in the hall in the coming weeks.

Fera's face fell when asked about them.

He said the Steelworkers are trying to help those couples relocate their weddings.

Acting deputy chief of fire Dan Stack said nobody was in the building at the time and nobody was injured as a result of the fire.

The Ontario Fire Marshal's office will be investigating. Because the majority of the damage was in the banquet hall, the investigation into how the fire started will begin there, Stack said.

The Greater Sudbury Police Service will update the public as soon as further information becomes available and/or the status of the roads involved in the closures.