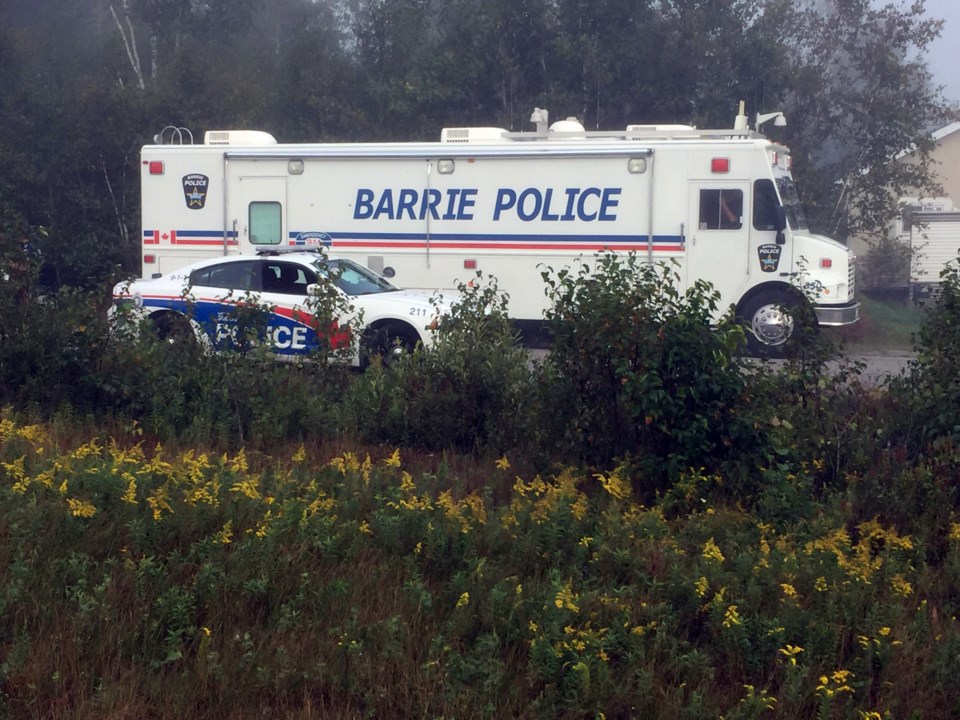 The scene from September 2018 in Garson as police deal with an attempted murder-suicide. The SIU has cleared police in the man's death. (Heather-Green Oliver/Sudbury.com File photo)

Greater Sudbury Police played no role in the suicide of a  Garson man in September 2018, the province's police watchdog has concluded.

A report released Thursday by the Special Investigations Unit (SIU) detailed the extended negotiations between the distraught 63-year old and police, as they tried to persuade him to give himself up.

The incident began Sept. 12 at 6:14 p.m. when a neighbour called 911 and said her neighbour on Sunny Street had been shot by her husband but managed to escape. Two shots had been fired, and the victim said her husband had threatened to kill himself.

The tactical unit arrived, as well as crisis negotiators, who were later relieved by similar teams from the Barrie Police Service. Recordings of negotiations between police and the man – called “the complainant” in the report -- show he was drunk, remorseful and believed he had ruined his life.

“Throughout the recording, the complainant referenced his intent to kill himself and mentioned 'death by cop'” the report says. “He said he had no choice because he did not want to go to jail.”

After more than six hours of negotiations, the man appeared to fall asleep, and the first recording ended around 2 a.m. He woke up around 5 a.m. and noticed his wife wasn't there.

“The complainant said he was sorry and began crying,” the report says. “He said his future was life in jail.”

A final recording made by the Barrie negotiator included the man discussing troubles in his marriage, and he repeated that his life was over because of what he had done.

“The complainant said he was in a situation he never thought he would be in his life,” the report says. “He again expressed anguish over his family circumstances, and explained he had been having trouble sleeping and had snapped. He said he did not have any choices and that he cannot forgive himself for doing what he did.”

He then thanked the negotiator for talking with him and, at around 6:52 a.m., the man said he needed a break. That was the last time they spoke. At 12:27 p.m. on Sept. 13, a robot and a police dog were sent in, and pictures from the robot showed the man, laying motionless, on a bed. Police entered the home and found he had shot himself in the head, with the  shotgun beside the body.

In his analysis, SIU Interim Director Joseph Martino said the question he had to determine was whether police actions were negligent in any way, and whether that negligence contributed to the man's death.

But negligence requires proof that police behaviour was so unreasonable in the circumstances, it rose to criminality. There was no evidence of that in this case, Martino wrote.

“GSPS officers had contained the scene with tactical officers, evacuated homes in the area and, with the assistance of trained negotiators and a psychiatrist, were communicating with the complainant with the aim of having him surrender peacefully,” Martino writes.

While five hours passed between the last communication with the man, and when police stormed the home, that is no fault of police, he writes.

“I can find no fault with the timing of her decision,” Martino says. “The officers knew that the complainant was armed with a firearm, had shot at and attempted to kill his wife, was intoxicated, and had spoken about provoking a confrontation with police in order that he be shot dead.

“In the circumstances, the (officer) was entitled to exercise extreme caution and only expose officers in her command to lethal danger as a last resort when all other options of resolving the standoff had failed. On this record, it is evident that the officers conducted themselves well within the limits of care prescribed by the criminal law.”