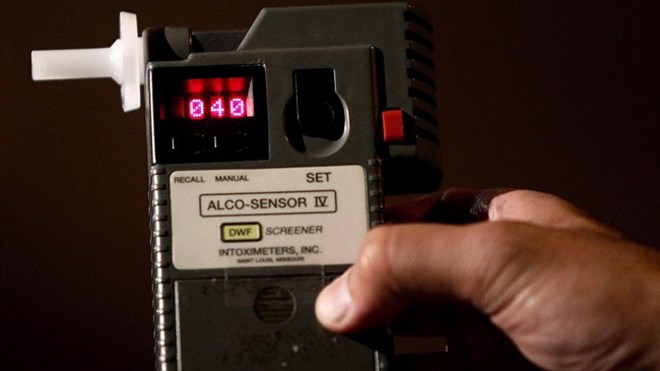 A RCMP Constable holds a breathalyzer test showing a driver's blood-alcohol reading of .04 during a roadside check in Surrey, B.C., in this September 24, 2010 photo.Half of Canada's provinces now have a zero-alcohol policy for young drivers, with Quebec becoming the fifth to join in on no-alcohol legislation along with Manitoba, Nova Scotia, New Brunswick and Ontario. THE CANADIAN PRESS/Darryl Dyck

On Jan. 10, Greater Sudbury Police Service arrested two men for impaired driving within a span of about 45 minutes, and they're reminding drivers that it is never OK to drink and drive.

The first call came in on Friday around 8 p.m.

"We received a call from a concerned community member regarding a man possibly impaired while in control of a motor vehicle near Perreault Street in Sudbury," GSPS said in a post on Facebook.

Upon arrival, officers found a 54-year-old man in the driver's seat of a vehicle while it was running in a parking lot.

After providing a breath sample that registered a fail, the driver was placed under arrest and transported to police headquarters.

Then at around 8:45 p.m. that same night, GSPS responded to a call involving a transit bus that had been rear-ended at the intersection of Barrydowne Road and Lillian Boulevard.

While speaking to the man believed to be responsible for the collision, the bus driver could smell alcohol on him.

Although no injuries were sustained, officers attended due to the fact that there was a suspected impaired driver on scene, GSPS said.

The 40-year-old driver provided a breath sample that police reported registered a fail. The man was placed under arrest and transported to police headquarters.

Both men were released on promises to appear. Their first court appearances are set for Jan. 22.

Police would like to remind the public that driving is a privilege, not a right. There is no excuse for operating a motor vehicle while under the influence of drugs or alcohol. Please do not let one moment of poor judgment ruin your life or the lives of others.