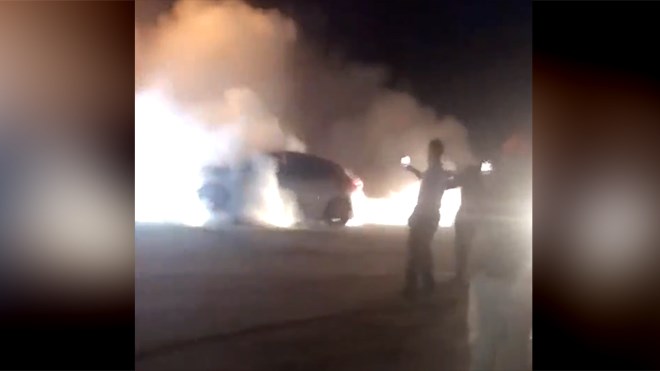 A 'memorial burn-out' held following an Aug. 14 memorial service in Hanmer has resulted in a criminal investigation by Greater Sudbury Police Service.

A 'memorial burn-out' held following an Aug. 14 memorial service in Hanmer has resulted in a criminal investigation by Greater Sudbury Police Service.

The memorial service was being held for a 21-year-old man who died Aug. 4 after crashing his ATV into a parked car on Michelle Drive in Hanmer.

On Aug. 14, Darian Grenier, a friend of the man who died, posted a 14-minute video to Facebook showing numerous young people, mostly young men, in formal wear, cheering as vehicles perform burn-outs in the parking lot and intersection outside the Cooperative Funeral Home.

In his Facebook post, Grenier said the event was in honour of their deceased friend. He also seemed to take issue with those who complained. Although he mentions his deceased friend by name, Sudbury.com is omitting the name out of respect for the man's family.

"Full video of [name omitted] burnout send off for anyone who missed it and would like to view," the post begins. "And to those who were complaining about 'a bunch of valley kids,' if you guys didn’t clearly see we [were] all gathered at a funeral home and dressed up, we had EMS and fire units on site to supervise how the hell could you think this was a random act.

"We apologize for disturbing you guys but the words said by some of you was just flat out f-----g disrespectful."

In the post, Grenier contends paramedics and Greater Sudbury Fire Services were on site monitoring the burn-out, but GSPS spokesperson Kaitlyn Dunn said that was not the case.

She said off-duty members of the city's emergency services with a connection to the family were in attendance at the funeral, but did not witness the burn-out and certainly didn't supervise, as Grenier maintains.

Dunn said police have launched a criminal investigation into the incident.

"We can confirm that off-duty members of the Greater Sudbury Police Service were in attendance at the funeral, but no one was involved in or made aware of this incident prior to it occurring," Dunn wrote to Sudbury.com. "We take road safety and the safety of our community members very seriously and this matter is being criminally investigated."

Police were dispatched to the area in response to the calls received from members of the public, but by the time they arrived, "the majority of the parking lot was empty and the vehicles involved in the complaint were gone."

Police are asking anyone with information about the incident or video, to contact GSPS at 705-675-9171.