A first look at the Five's new jerseys 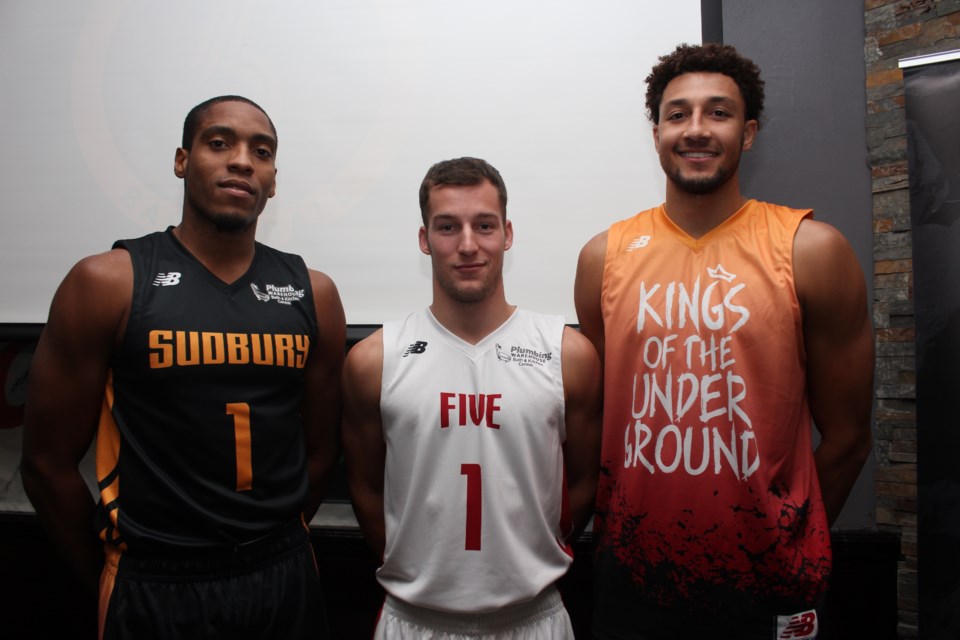 The Sudbury Five's season opener is still more than two months away, but the team gave its fans an early glimpse of what they'll be wearing when they hit the court for the 2019-20 NBL Canada season.

A small contingent of fans, sponsors, coaches and players gathered at Overtime Sports Bar and Grill Tuesday morning to unveil the trio of jerseys that the Five will don this year.

The Five's mantra for this season is "Level Up", an indicator that the team is looking to build on the success of their inaugural season that saw them make the playoffs and record the league's third-highest attendance numbers.

"Last year was about hopes and dreams and goals," said Cliff Skelliter, Launchpad Media. "This year is about continued growth."

Five owner Dario Zulich spoke at Tuesday's event, noting that he's as much a fan of the team as he is the owner.

"I was nervous last year, but now we have to repeat this," said Zulich. "Sudbury is a basketball town and I'm a fan of the team like you guys."

In addition to unveiling their three jerseys, the team announced the first three players that have been signed to suit up for the Five this season, and there was a decidedly hometown flavour.

The first player signed was 28-year-old George Seresse, who appeared in 42 games for the Five last season. Serresse is a Sudbury product who played his university basketball at Laurentian.

"To have a professional basketball team in Sudbury and a player from Sudbury is really something special," said Five coach and general manager Logan Stutz.

"George represented his city very well last year and Sudbury should be so proud of him. He is a great basketball player and a great person. He has a great family and I am excited to have him back for us this year. All the young players in Sudbury should be looking to George and hoping one day they can do what he has done."

"Joey joined us later last season and did everyhing I asked of him as a coach," said Stutz. "He came right in and worked hard on the court and in the community."

The final player introduced on Tuesday was rookie Brady Skeens, a 6-7 forward from Stutz' hometown of Kansas City, Missouri. Skeens attended Washburn University for four years, where he was named Defensive Player of the Year in his conference three times, while scoring 1,229 points and posting a school record 68.8 shooting percentage.

"He had an amazing college career and now it's time for him to transition to the pro game. One of Brady's biggest upsides is he is a great person and coachable. When you add that to his ability on the court I think he is going to surprise a lot of people in his rookie season."

Fans of the Five can get their first look at the team when they play their first pre-season home game on Nov. 22 when the defending NBLC champion Moncton Magic visit the Sudbury Arena.

Single game tickets will go on sale Oct. 28 at 10 a.m. at the Sudbury Arena box office and online at thefive.ca.