A pleasant bonus from a bocce experience 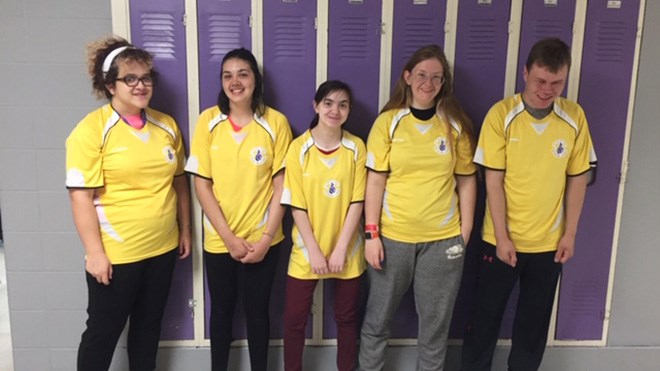 What started as a physical activity outing has grown into something bigger - much, much bigger - for Lo-Ellen Park Secondary School Special Education teacher Julian Colilli and his team of newcomers to the sport of bocce.

Thanks to their performance at the end of March at a regional tournament hosted by Ecole Secondaire Macdonald-Cartier, the Knights team of Jordan Burke, Ashlynn Pfaff, Janie Smart, Ruth Hamelin and Hannah Sirkka are off to Toronto next week, site of the Special Olympics Invitational Youth Games, all part of the 50th anniversary celebration for the group on a world-wide setting.

"We went to Mac-Jack for the tournament and were not really thinking too much about it," admitted Colilli. "We just wanted to play some bocce and have some fun, not really pay attention to the scores or the brackets, and we found out the next day that our team qualified."

"We were pleasantly surprised about that, we weren't expecting it."

In fact, the local event provided an interesting venue for the young athletes to tap into some aspect of their sporting background, using a comparable skill in trying to garner a comfort level with this new endeavour.

"I just think of bowling," suggested 16 year old grade 11 team member, Ruth Hamelin. "I bowled in a league in Espanola before. This time, you have to roll the white ball and get it perfectly near the middle. That was basically the hardest part."

Also 16 years old and in grade 11, Hannah Sirkka is enjoying a very busy stretch in May, having participated at the NOSSA Gymnastics Championships last Monday before heading off this week to Toronto. Mixing a little soccer into her schedule as well, Sirkka is now finding her zone in this most recent addition to her athletic repertoire, as her knowledge of bocce expands.

"You have to try and get it as close as possible to the white ball," she explained. "I like shooting last, because I get nervous, so it's easier to shoot last. A lot of the people on our team are really good."

That initial venture across town now finds Team Lo-Ellen participating in an event that also includes entries from across Canada and the United States, as well as (apparently) a crew representing Jamaica. Still, Colilli returned to the initial premise, when asked about the benefit of this adventure for his troops.

"This is really about getting the kids participating in sport, interacting with different people in a different environment, and just enjoying it," he said. "Some of our students don't often enjoy the opportunity to travel."

Either way, the end result has far exceeded the initial expectations, much to the delight of the local team.

The Lo-Ellen Park Knights will be joined, in this tournament, by a quintet carrying the colours of the Sudbury Secondary School North Stars, as well as at least one Sudbury community team.