Ambroise Stevens-Paquette is definitely an athlete 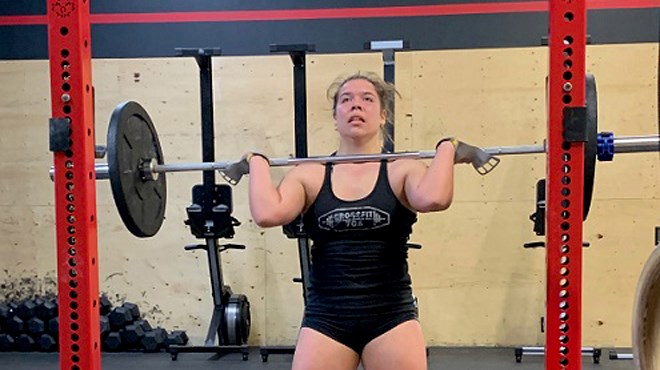 By her own admission, Ambroise Stevens-Paquette is not a natural athlete. Still, that was the world for which she yearned, despite the fact that genetically speaking, one could presume a predisposition for the performing arts.

Her father, after all, is well-known local francophone musician and entertainer, Stephane Paquette.

"My dad has made it very clear that I am really not talented when it comes to singing," said the 14-year-old grade nine student at École Secondaire Catholique l'Horizon, with a laugh.

"But with athleticism, in middle school, I wasn't the chubbiest kid, but I was never the smallest. I wanted to be like the athletes, to be healthier. I wasn't the most athletic, but I was trying to get with all of my friends."

So try and try she might. Figure skating for a few years, when she was younger. On to swimming, even a stab at running.

"Even though I wasn't really built for it," Stevens-Paquette confessed.

The watershed moment, for the well-spoken teen, came with a chance viewing of "Fittest on Earth", a 2015 Netflix documentary that followed a select group of athletes on the road to the Reebok CrossFit Games.

"The first time I met Mandie (Duguay), my trainer, she asked me about my goals, and I was like, I want to make it to CrossFit Worlds," said Stevens-Paquette. "I was twelve and a half then."

This past Saturday, culminating a year or so of solid training, the ultra-focused athlete - yes, it's now a safe bet to refer to Stevens-Paquette as an athlete - took part in phase two of the annual worldwide competition, having cracked the top 200 in a field of more than 1500 competitors in the age 14-15 category.

Over the course of a highly intense eight minute workout, the local entry and her peer group would be attempting to navigate, as deeply as possible, through a lineup of skills that included 45 thrusters (weighlifting movement that incorporates a squat directly to a jerk - weight above the head), 45 "toes to bars", 45 cleans and 45 chest to bars.

That session is but one of five that are scheduled over a period of less than a week, each targetting different aspects of the varied workouts that are part and parcel of the CrossFit regimen. For the likes of Stevens-Paquette and the thousands who swear an affinity to these training models, the beauty lies in the diversity.

Few are likely to enjoy a natural ability in each and every facet of the competition, and the youngest of three children in the family was no different. "I'm not that advanced in my gymnastics movements, I'm a heavier athlete," stated Stevens-Paquette.

"But I love lifting. I have a lot of natural strength in my legs, so I knew that lifting was a breeze. But if you look at most of the girls in my 14-15 category, they are twenty pounds lighter than me, and many have gymnastics background."

Time to play to her strength, quite literally.

"I've been focusing with Mandy on a lot of core work and upper body strength. I feel that I am at the point where I have the strength, so let's work on the coordination and skill."

Daily workouts are demanding - Stevens-Paquette visits the Pacific Avenue location, just off Lorne Street, five to six times a week, and twice a day on Tuesdays and Thursdays - but the timed competitive sessions bring it to a whole new level altogether.

Making the most of the eight minutes at your disposal requires a strategic game plan, and one that can be amended, on the fly.

"When it comes to competition, I talk to my coach and she helps me," explained Stevens-Paquette. "With my thrusters, we wanted to do 12-12-9 (sets), but I could hear her tell me to do sixes, because she could see how I was feeling, how fatigued I was getting."

Overall, she gave herself a better than passing grade, taking her first shot at ascending to a top ten placement that would qualify her for the World Games in August.

"I would have liked to get into the chest to bars, but I get a little nervous in competitions, especially when people are watching me," she said. "I was kind of disappointed that I couldn't stay with my sets of four on toes to bar, but with the cleans, I knew that was my go time."

And "go" she has, with no signs of a "stop" anytime soon. Not until the final goal is reached, a World Games appearance, for Sudbury athlete Ambroise Stevens-Paquette.