Appearance of Daniel Nestor a nice touch at Tennis Classic 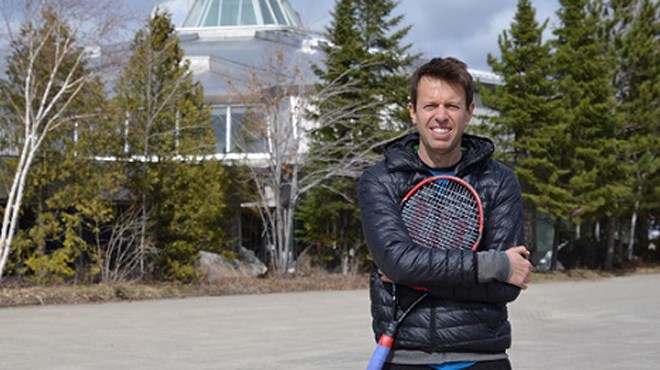 There might not have been another budding Daniel Nestor in the group, but the 75+ entries that participated in the Northern Ontario Tennis Classic at the Sudbury Indoor Tennis Centre represented some of the top court talent in Northern Ontario.

With the Canadian tennis legend and Olympic gold medallist (Sydney - 2000 - men's doubles) on hand for the festivities, local athletes welcomed competitors from North Bay, Sault Ste. Marie, Burlington and Barrie to town for the second edition of this revived event.

Certainly, the highlight for one and all was both a chance to interact with Nestor at a well-attended question and answer session Saturday night, as well as the opportunity to participate or witness his play in a handful of pro-am matches the next day.

Players ranged from nine years of age to 85, with the top level prize (Men's 9.0) doled out to the teenage pairing of Adrian Catahan (North Bay) and Bryce Bodak (Burlington), who bested the local tandem of Andrew Varghese and Cliff Richardson.

The Barrie brigade enjoyed a fruitful weekend in Sudbury, sweeping the Men's 7.0 final (Mark Martynshyn/Mike Martynshyn over Konrad Weber/Johnny Glainville), as well as the Ladies 7.0 (Michele May/Claire Brown vs Elaine Kreke/Sandra Curlook from Sudbury) and the Juniors U18 division (Reilly McLucsky/Konrad Weber vs Lauren Kennedy/Logan Mills).

U12 play would see locals Aliasgar Dedenwala and Ryan Di Salle stop Barrie cousins Maddy Martynshyn and Isaac Martynshyn in the grand finale, while the Barrie duo of Ralph May and Sammy Burke defeated hometown favourites Jim Kolar and Todd Brown to walk away with Men's 7.0 consolation bragging rights.