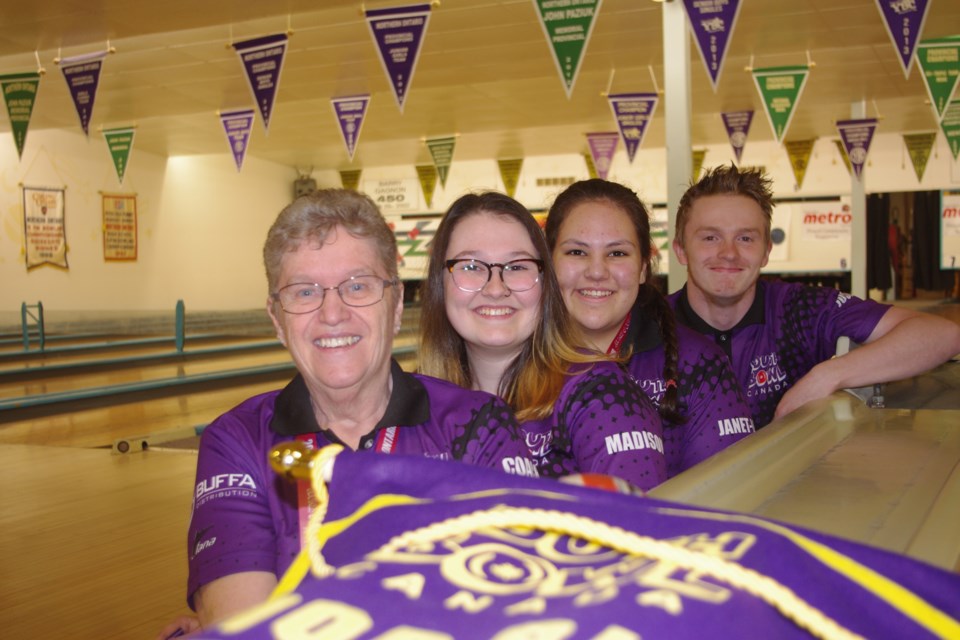 Take a veteran with no less than seven previous appearances at youth nationals, mix it in with a bowler experiencing that atmosphere for the very first time, all within the context of capturing their provincial title by just three pins, and apparently, you have the makings of a Canadian championship duo.

Not only did the Whitewater Lanes tandem of Janet-Leigh Dominic and Madison Beaudoin accomplish that feat, they did it in style. It was quite a ride for a pairing that merged some notable differences with some interesting commonalities.

A bowler for most of the past 15 years in Espanola, Beaudoin made the move to Whitewater in Azilda this year, one that paid off big time given the fact that 2019 YBC (Youth Bowl Canada) National Championships from May 5- 7, in Oshawa, represented her first trek to the event.

"Bowling by myself in Espanola, a smaller bowling alley, it was usually just me and one other person," said Beaudoin, currently 19 years of age.

"Coming here, it's helped me a lot, working with the coaches, especially Doris (Kirkey)."

After earning the nod to represent Northern Ontario by the slimmest of margins at provincials in Thunder Bay, Beaudoin shifted her mindset to simply enjoying the ride.

"I think just having fun with it most prepared us," she said. "Right after provincials, we really started practicing, bowling game after game, playing bowling bingo, which is a lot of fun."

Though the team started a little flat - they were sporting a record of 2-2 after their first four games - ten consecutive wins would easily slide the locals into first place, with Beaudoin seemingly completely undaunted, boasting an average of 223.36 at nationals.

"My average in the league is 205, so I did better than I would in the league," she said. "I think it's just that added pressure that helps bring out the best in everyone. I usually don't throw a really strong ball, but if I get it out with a little bit of lift, then it really helps. It helped that Doris kept reminding me to get the ball out with 'oomph', which is what we called it."

Her partner, Janet-Leigh Dominic, can point to a bowling resumi that few can match. With a 244 average in league play, the long-time participant at Valley Bowl in Chelmsford, until it closed in 2016, has been to nationals on four previous occasions as a member of a team (either 4/5 bowlers), and three more times for singles play.

"This one was extremely different, because I've never been on a team of two," she said. "It was a good different. With more people on the team, you have more personalities. Some people are more dramatic and show more emotion.

Through their next ten games, the Beaudoin-Dominic partnership would team up for scores that fell below 458 only once, and even then, it was enough to keep the ball rolling (pardon the intended bowling pun!) with a 341-318 victory over Alberta.

Individually, Dominic would string together eight straight games of 218 or better, seven of which exceeded 238, while Beaudoin kept pace with a run of 235-208-240-266-219-250. With their record of 12-2, the Northern Ontario representatives were three games clear of Saskatchewan (9-5), with Manitoba and Quibec right on their heels at 8-6.

"When things are going well, you try not to think about it too much," said Dominic. "As soon as you start to think about it, that's when it doesn't go well. Bowl the next game like you're bowling your first game, and just focus on trying to hit your average."

Unfortunately, the reward for bowling so well would see the girls sitting on the sidelines, waiting patiently, as the playoff step-ladder began, with Manitoba besting Quibec in the tie-breaker, and Saskatchewan downing Manitoba 402-372 in the 2nd vs 3rd matchup.

Thankfully, the benefit of finishing first is having one extra loss to give, a cushion that was needed as Saskatchewan slipped past Northern Ontario 462-435 in game one of the finals. The best, however, was yet to come.

With everything on the line for both teams, all four bowlers rose to the occasion, as Beaudoin and Dominic needed to pull through with their third highest total pinfall of the tournament in order to claim gold, 521-507.

"It came right down to the last ball," said Dominic. "I really wanted the gold medal. After so many nationals, that's all I really wanted, was gold. But if we didn't get gold, I was OK with getting silver," she added with a smile.

Whitewater Lanes' teammate Joe Phillips can relate. A member of a bronze medal winning team at nationals one year ago, Phillips returned in the singles bracket this year, finishing tied for fifth place with Alberta (Kory Larabie) and Saskatchewan (Steven Gyori).

Just two more wins in his 22 preliminary round matches would have propelled the 19 year old bowler into the playoffs. Still, he cannot help but to be pleased with the progress he has shown in recent years, the maturing of his game as he readies to face the challenging Open Men's competitors next year.

"I used to get mad all the time," he said with a smile. "Now, I just try and focus on my game. I adapt my release based on how I step, how I slide. It changes, sometimes, based on how I feel."

"I understand now how to bowl under pressure. Appearing at nationals helped me to make sure I was focused more on my lane, on my shot, and not on the crowd." As for the fact that he would fly solo in 2019, versus teaming with Kyle Beaulieu last spring, Phillips suggested that is usually the game plan come every September.

"I always give singles a shot, every year," he said. "I try singles, and if you don't make first place here, you have a chance to go for doubles. As soon as I started on the process for Four Steps (to Stardom), I knew that I was going to go to nationals. It was just fate."

Competing in a number of total pinfall tournaments traditionally, Phillips acknowledged that he did need to shift his thinking a little when it came to the match play format in Oshawa. "It doesn't really matter about my average, in my head, as long as I bowl two pins better," he said.

"As long as my opponent did one pin worse than me, I would be happy."

Happy, and well on his way to joining the glut of local bowlers, including Madison Beaudoin and Janet-Leigh Dominic, who have mounted the podium at nationals.

OHL president remains hopeful for full schedule with fans
Jun 20, 2020 5:00 PM
Comments
We welcome your feedback and encourage you to share your thoughts. We ask that you be respectful of others and their points of view, refrain from personal attacks and stay on topic. To learn about our commenting policies and how we moderate, please read our Community Guidelines.