Bulldogs need OT to squeak by Sudbury in high-scoring match 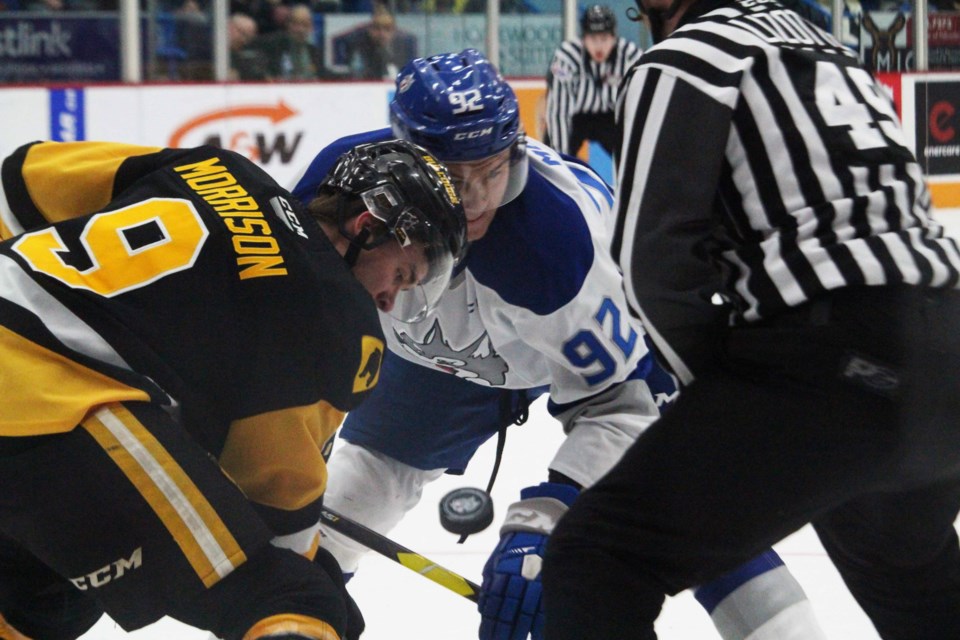 Sudbury Wolves face off against the Hamilton Bulldogs at the Sudbury Arena in the last of a three-game homestand. (Keira Ferguson/ Sudbury.com)

The Sudbury Wolves faced off against the Hamilton Bulldogs at Sudbury Arena on Sunday, hoping to finish off their one loss, one win homestand on a high note.

Hamilton opened up the event in the first period, launching the teams into a nearly shot-for-shot battle that kept both goaltenders on the edge of their net.

In the end, it all came down to a heavy-handed performance by Hamilton in the second period, which built up enough of a lead to carry the visitors to an 11-10 final in overtime.

Wolves' Blake Murray was named second star in the pairing for delivering two goals and one assist. He was pushed out of the top position by Sudbury-legacy Tag Bertuzzi, who secured Hamilton's victory with his fourth goal of the evening.

Bulldogs' Avery Hayes opened up the scoreboard at 6:40 with a shorthanded goal past Christian Purboo. Sudbury responded a little more than two minutes later with Kosta Manikis' fourth goal of the season, with help from Owen Robinson and Ethan Larmand.

Byfield claimed the next goal of the evening when faced-off against Hamilton's Jan Jenik, whose backhand from the puck-drop slipped past goaltender and teammate Zachary Roy, putting Sudbury ahead by one.

He was followed to the net 42 seconds later by Byfield, who delivered his 10 goal of the season and first of the evening with assistance by Byfield and David Levin.

Both teams spent a good amount of time behind glass in the first period, the Wolves of which earned seven minutes of penalty time compared to the Bulldogs' 11.

Sudbury headed into the second period up two, with shots on goal 13-12 in their favour.

Hayes was first off the bench once again in the second period, delivering Hamilton's second goal of the evening 51 seconds into play. The U.S. recruit was assisted in the play by Navrin Mutter and Sameron Supryka.

He was followed to the net by teammate Bradley Johnson, who tied the game with his second goal of the season at 3:01 with help from Ryan Winterton and Lawson Sherk. Bertuzzi pushed Hamilton ahead nine seconds later, with assistance from Jenik and George Diaco.

It was at this point that Wolves' goaltender Mitchell Weeks pushed out teammate Purboo to try his luck between the pipes.

Levin evened the scoreboard at 5:40, delivering a shorthanded goal for Sudbury with help from Murray. Teammate Nolan Hutcheson pushed Sudbury ahead a little over a minute later unassisted.

Now it was Hamilton's turn to switch goalies, trading Roy for Marco Costantini. They responded with a three-goal streak by Bertuzzi, Hayes and Arthur Kaliyev, sparking Purboo's return to net.

Cameron Supryka delivered one more point for Hamilton before Murray responded with a goal of his own to break up the steak.

Bertuzzi completed his hat trick with just under 45 seconds left in play, capping off the period with a three-point lead for Hamilton. Shots on goal were 16-5 in the Bulldogs favour.

Sudbury pulled their goalie at 19:47 prior to his return for overtime. In the end, it was Bertuzzi who broke through the crowd of three to secure the 11-10 final for Hamilton.

Sudbury outshot Hamilton 12-8 in the period and outshot 3-2 in overtime, with final shots on goal 39-32 in favour of their visitors.

The Sudbury Wolves remain first in the central division, second in the league overall and second in the eastern conference, with 14 wins and 8 losses.

The pack head back on the road to face the Ottawa 67's Nov. 21 at the TD Place Arena.

About the Author: Keira Ferguson

A graduate of both Laurentian University and Cambrian College, Keira Ferguson is a New Media Reporter at Sudbury.com.
Read more