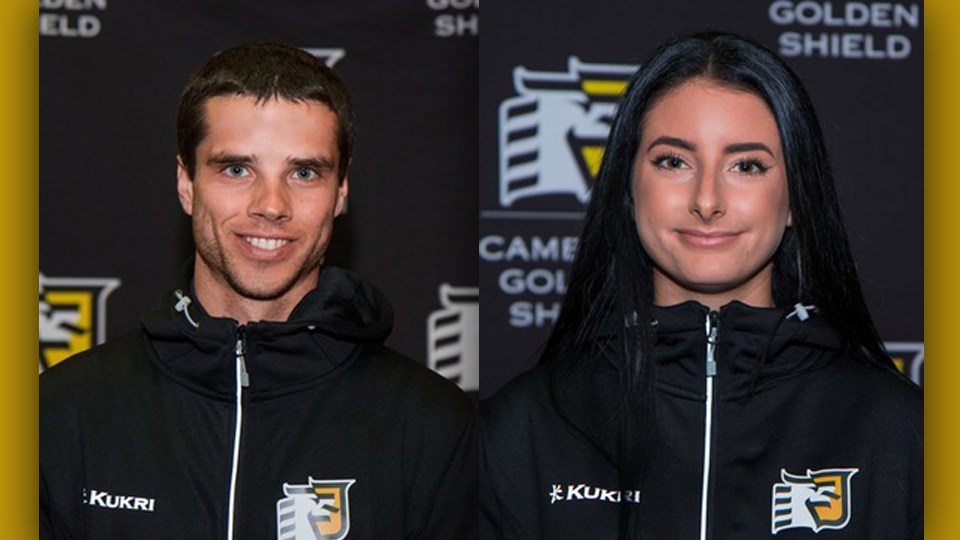 Cambrian College has paid tribute to its outstanding varsity athletes, announcing the winners of its various athletic awards on April 24.

“Congratulations to each of our award winners,” said Alison De Luisa, Cambrian’s Associate Vice-President of Human Resources and Student Services.

“Our varsity athletes contribute so much to the Cambrian experience, with the example they set by balancing academics and sports and the pride they instill on campus.”

Cambrian’s Female Athlete of the Year is Dana Isaia. Dana is captain of Cambrian women’s soccer team and is graduating from the Medical Radiation Technology program this year.

“Dana was our most influential player this year,” said Evan Phillips, coach of the Golden Shield women’s soccer team. “She was a leader on and off the field. When playing she was a force on defense and offence, she understood our systems best and was a rock for us. In the locker room she was a great leader in many ways. When she spoke, everyone listened. In my opinion, Dana joins Marissa Falvo, Tiffany Johnson, TK Rocca, and Alex Ross among the most influential players in Cambrian history.”

Cambrian’s Male Athlete of the Year is Eric Leishman. Eric placed third in cross country running at the 2019 provincial championships and is a leading distance running in the region. Eric is graduating from the Personal Support Worker program this year.

“Eric is the main reason that Cambrian College made it to nationals for the first time in its history as a full men’s group,” said Jeffrey Paul, coach of Cambrian’s cross country team.

“The determination he has is why he’s a natural leader. Aside from his grit and athleticism, he is a good person. He encourages the best of his teammates, and he takes the reins by setting a tone that screams success. Eric is one of the hardest-working athletes I’ve ever witnessed, and I feel humble and grateful he calls me coach.”

This past season also saw the return of badminton to Cambrian’s roster of varsity sports.

“Congratulations to all our winners and all of our athletes,” said De Luisa. “You have been wonderful ambassadors for Cambrian. To our graduating athletes, thank you for your wonderful contributions to Cambrian, and we wish you all the success in your future.”