Team acquired two defenders, one goalie that will lace up this week
Nov 16, 2020 6:00 PM By: Sudbury.com Staff 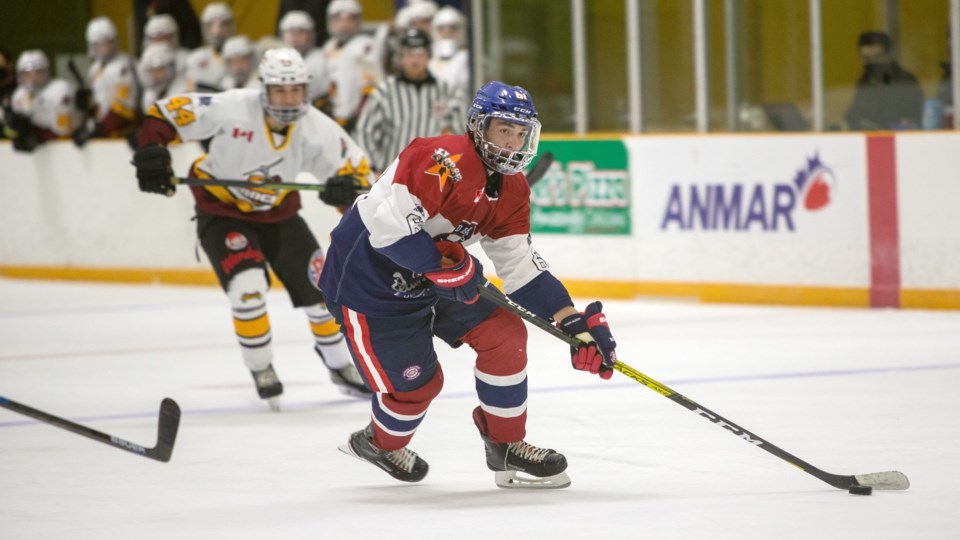 The Rayside Balfour Canadians dropped their season opener at home to the Timmins Rock on Sunday. (Caleigh Fera/sudburylight.ca)

The Rayside-Balfour Canadians opened the 2020-2021 regular season on Sunday night with a loss against the Timmins Rock.

On the back of a long-awaited start, both teams came out with energy, but ultimately the Rock got the better of the Canadians taking the contest 4-1.

The teams traded early chances in the first period before Derek Seguin opened the scoring for the visitors at 17:28 on the powerplay.

Shortly after, Tyler Schwindt struck on the powerplay again for Timmins at 13:04 of the second. Rayside came close a few times early in the third period, but to no avail.

Brendan Boyce closed out the scoring for the Rock at 12:01 of the third period to make it 4-1. Tyler Masternak took the win in goal for Timmins making 30 saves on 31 attempts while David Bowen stopped 27 for the home side.

Rayside opens the season 0-1, and the Rock record their first win to start 1-0.

The teams face each other again Thursday night at 7 p.m. in Chelmsford before heading up Highway 144 for the weekend matchups.

Prior to the game opener, the Rayside Balfour Canadians announced the acquisition of two  veteran defenceman and one goaltender to add to the Canadians roster in the coming week.

Forsyth acquired 18-year-old defenceman Carter Geoffrey from the St. Catharines Falcons Jr. B team  of the NOJHL in exchange for a development fee. Geoffrey stands 6-0 and weighs 185 lbs. He played his first junior season last  year with the Falcons and recorded seven points in 38 games. Geoffrey finished the season with 118 minutes  in penalties – the second most on his team. Geoffrey is a right-shot defender that recorded 17 points in 26 games with the Niagara North Stars AAA team in 2018-19.

Also added to the roster is 18-year-old right-shot defenceman Robert Brisson. The native of Embrun, Ont., finished last season with the Espanola Express of NOJHL and recorded three goals and seven assists for 10 points in 26 games. Brisson is 6-1 and weighs 195 lbs. He played for the Canadians in 2018-19 and  recorded one point and 10 minutes in penalties in 16 games.

Brisson and Geoffrey will add some significant toughness, skill and experience to the Canadians blueline.

Finally, The Canadians acquired the rights to 19-year-old veteran goaltender Joel Rainville. The 6-1, 175-pound native of Sturgeon Falls has played 77 games in the NOJHL and has compiled a record of 18 wins and 49 losses.

He has a combined goals-against average of 4.63 and a combined save percentage of 0.883.  Rainville has carried the load for the Espanola Express, having played 74 games in two seasons for the  improving franchise and back-stopped the Express to their first play-off appearance in several years last  season.

“Given the rules that we are now playing under, and, given our inability to call-up affiliate players this season, it was critical that we add some much-needed depth to our line-up,” said Canadians GM Jeff  Forsyth. “Geoffrey will provide toughness to our defence corps while Brisson adds experience and skill to our back-end. Both defencemen are right-shots, as well.

“With the addition of Rainville, we now have three excellent goaltenders to call upon. The key to these additions is all three are eligible to return next  season, which really puts our team in good position moving forward.”

The three newest players are expected to join the Canadians at practice this week in preparation for three games in four days against the Timmins Rock beginning Thursday night at the Chelmsford Arena.

Local basketball talent Aneisha Rismond commits to Voyageurs
Nov 20, 2020 7:00 PM
Comments
We welcome your feedback and encourage you to share your thoughts. We ask that you be respectful of others and their points of view, refrain from personal attacks and stay on topic. To learn about our commenting policies and how we moderate, please read our Community Guidelines.