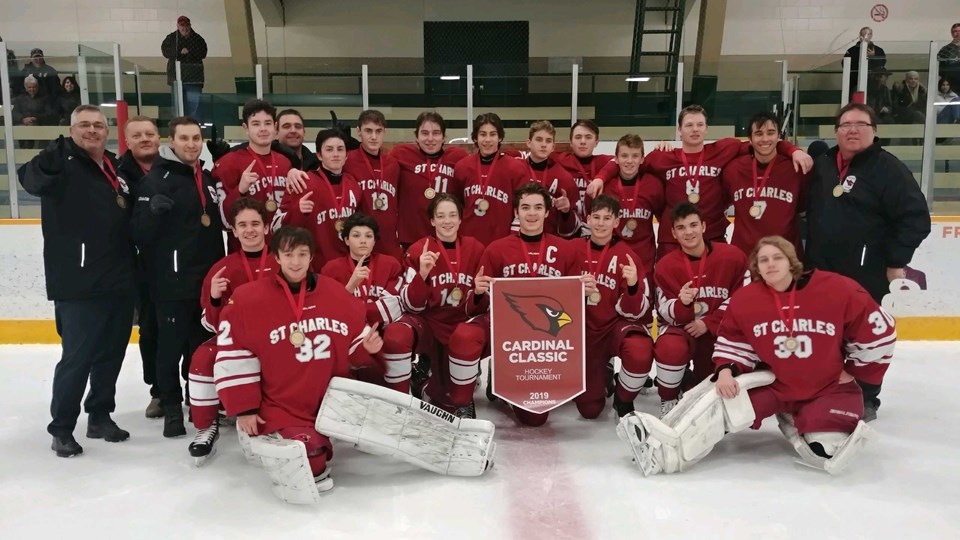 With their sights set on avoiding a quarter-final single game showdown with a fifth place team, the College Notre-Dame Alouettes came through with one of their better all-around performances this year, downing the Lively Hawks 3-1 in varsity boys high-school hockey action on Monday.

Ethan Corcoran opened the scoring for the Als, defenceman Matthieu Aubin restored the one goal lead with a seeing-eye shot from the point in the final minute of period two, and Braeden Morin put an exclamation mark on this victory, netting a dazzling goal on a lovely individual effort with 2:32 remaining in the game to move the 8-4-2 Alouettes to within one point of the 9-3-1 Hawks.

With Joey Bennett recording the only goal of the game for Lively, CND could take pride in doing a great job of keeping the top guns of the home team at bay. "They have that one big line with (Spencer) Dickson, (Eamon) Dolphin and (Tyler) Bell," stated Corcoran, who could not complain of a lack of ice-time, his team missing a couple of key forwards with suspensions.

"They're good. I've played with all of them, so I know they're quick - and they're dangerous, too. You have to be aware of that. We just had to work hard, chip it in, go hard in the corners, and we got the result that we wanted."

Though it looks like the Horizon Aigles (12-0-0) have all put sewn up first place, leading the St. Charles College Cardinals (10-2-1) by three points and the Lively Hawks by five, game scores this year would suggest that the margin of difference between all of the teams that are likely to end up in the Division I playoffs is far from insurmountable.

"It's fun, it really makes things interesting," said Corcoran, addressing the parity in the league. "You have to work hard for your wins."

Goaltender Jonah Rousselle turned aside 28 of the 29 shots he faced in picking up the win for Notre-Dame, while Hayden Wolff finished with 28 saves as well, for Lively.

With the high-school exam break currently underway, all teams will break until Monday, Feb. 3, when Horizon and Lively meet up, as do Espanola (4-5-3) and St. Charles.

Still with the Cardinals, coaches Rob Zanatta, Darren Michelutti and Casey Thompson prepared their team for the playoffs with one final tournament tune-up, returning from the Gary West Hockey Tournament at St. Andrew's College, in Aurora, with bronze medals in hand.

The Cards were in tough early, dropping their opening game to the eventual gold-medal winning King City SS Lions by a final count of 3-1, with Matthew Vehkala registering the only SCC goal. The teams were tied at 1-1 with less than seven minutes to play.

More than ready to hit the ice in game two, the Cardinals received a pair of goals from Brendan Weber in the first 26 seconds of the game, part of what would be a hat trick for the tournament all-star, en route to a 5-2 win over the Upper Canada College Blues.

Riley Bridge and Jordan Faught rounded out the scoring, as the team wrapped up day one of competition. The locals secured second place in their pool with a surprisingly tough 4-3 overtime win over the winless Kiski School Cougars (Pennsylvania).

Brendan Weber provided the heroics, netting his second of the game and fifth of the tournament in period number four, joined on the scoresheet by Riley Bridge and Jordan Faught, once again.

Unfortunately, in their semi-final affair, the SDSSAA reps were no match for the Gilmour Academy Lancers (Ohio), falling 5-0 and relegated to the battle for third place.

One final Sunday morning showdown against the host team as the St. Charles lads garner some hardware for the trip home, overcoming an early 1-0 deficit opposite the St. Andrew's College Saints, posting a 3-1 win as Cooper Molyneaux knotted the contest in the second, and Jordan Faught scored both the game-winning and insurance goals in the third.

Wolves drop their streak in Peterborough
Feb 17, 2020 5:07 PM
Comments
We welcome your feedback and encourage you to share your thoughts on this story. We ask that you be respectful of others and their points of view, refrain from personal attacks and stay on topic. To learn about our commenting policies and how we moderate, please read our Community Guidelines.