Caroline Ehrhardt is more than just fine with Olympic postponement 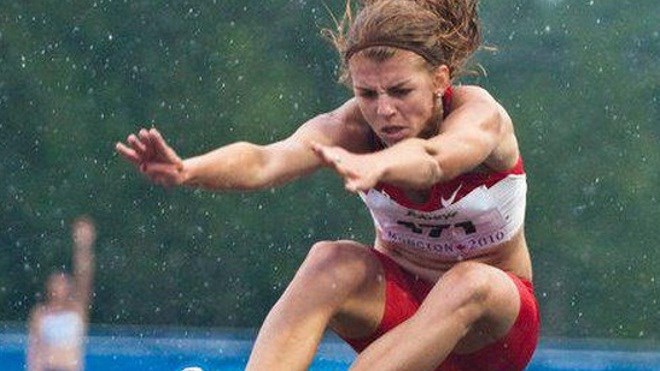 "To finally know for sure that the (Olympic) Games are postponed is definitely a relief. Without a doubt, this is what I was hoping for, for sure."

At first glance, it might come as a surprise to most that these are the thoughts of eight-time national triple jump champion Caroline Ehrhardt.

Born and raised in Espanola and having trained in her youth with Track North Athletic Club in Sudbury, Ehrhardt lives, these days, in London (Ontario), with her husband and Canadian decathlete Trevor (Stewart) Ehrhardt, the couple having completed their studies at Western University.

She is also, obviously, an Olympic hopeful, having not yet attained the standard necessary for pre-qualification.

To that end, and given all of the uncertainty, she was thankful when the Canadian Olympic Committee announced, over the weekend, that the country would not be sending athletes to Japan for the 2020 Summer Olympics.

"Before the COC made their announcement, there was a lot of frustration," said Ehrhardt. "It just seemed like the decisions that the IOC (International Olympic Committee) was making were just so irresponsible and so tone-deaf."

"When the COC made their call, it was relief and pride that our organization was able to make a decision that spoke to the safety of everybody. But with their decision, there was that one little bit of fear, of what if they do go ahead with the Games and were that one country that made this call, and nobody really followed our lead."

Within days, the IOC followed suit, backing up the Games in Japan by one full year. It was another indication of just how rapidly the landscape was changing, globally, affecting different people in different ways.

"About three weeks ago was when I first started hoping that the Games would be cancelled," said Ehrhardt. "At that time, it felt a little bit selfish. I was feeling that way because all of the meets that I had planned to attend to try and qualify for the Olympics were being cancelled."

"It wasn't necessarily all of the meets, across the world, at that time, but a lot of the ones that I happened to be going to."

Like most who have come before Caroline Ehrhardt and her contemporaries, Robert Esmie is thankful he did not have to try and balance the emotions of the current COVID-19 crisis as a world class athlete.

"On the one hand, I was wondering if it was premature, that maybe they could wait until April to finalize a decision, to see how bad things were, because these athletes have been preparing for four years in advance," stated the Sudbury resident and lead runner in the 4 X 100m sprint relay team which captured gold in Atlanta in 1996.

In the meantime, Ehrhardt and others will try and make the best of the situation, knowing that inevitably, at some point, they will return to competition. "We're just kind of taking it day by day, right now, and not come up with a plan," she said.

"Every time, in the past few weeks, that we have come up with a plan, the next day something has drastically changed. When the weather cooperates, we try and get out to a park and do some upbeat tempo running."

"We have my (triple jump/long jump) runway that I had as a in Espanola, growing up," Ehrhardt added. "It's in our backyard, which isn't nearly as big, but it gives us the space to do something."

"I'm not expecting to get any meets out of this season, so I just want to kind of keep my fitness up and stay healthy."