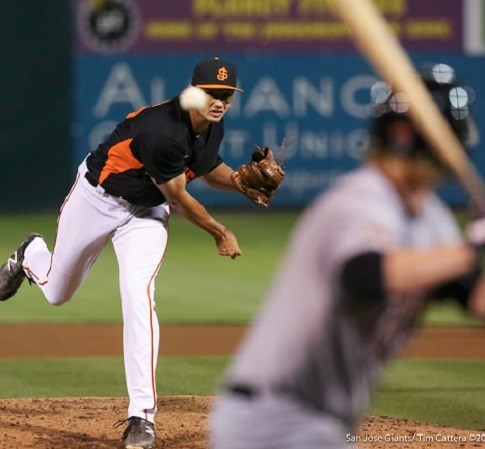 Last weekend, Storey was the third batter that Sudbury native Dylan Rheault would face in his spring training debut with the Cincinnati Reds, as the teams met in Las Vegas as part of the 2020 Cactus League schedule.

A two-time all-star, Storey has played in 544 games in the majors, just a touch more than the combined total of Raimel Tapia (255 games) and David Dahl (240), the first two Colorado hitters that Rheault would face.

"Regardless of what happens, I'll always have that memory," said Rheault recently, looking back on a very memorable stretch with the Reds, prior to the shutdown of baseball on Friday due to the spread of COVID-19.

"Everything has been going really well — it's been a while since I've had a true spring training," said Rheault, whose 2019 season was lost almost entirely to injuries. "With the hard times I've faced in the last year and a half, I was really able to appreciate yesterday (getting into the game vs. Colorado). It was a special moment for me."

Yet for as much as the young man who turns 28 in about one week's time does not want to take any of this experience for granted, he is also focused on the ultimate prize.

"I know that I am not going to break camp with the big league squad, but I know what my end goal is, and that's to be a big leaguer," said Rheault. "I know I've put in the work, I'm prepared. Just being here right now is a big step for me."

Originally drafted by the Baltimore Orioles in the 19th round of the 2013 MLB draft, following his graduation from the Central Michigan University Chippewas, Rheault has bounced around at various minor league levels, enjoying his most successful campaigns in the San Francisco Giants farm system in 2017 and 2018.

Yet is was his presence on the roster of the 2019 Canadian national team which competed at the 2019 WBSC Premier 12 tournament in Japan, Mexico, Taiwan and South Korea that appeared to garner the 6-foot-9 flame-throwing reliever a little extra attention.

Well that, and a little something new with his arsenal.

"I have a new pitch, a splitter," said Rheault. "It has a chance to be really, really good - and when I say a chance, it's going to be really good. I just kind of randomly learned it. My velocity has gone up, over the years, and that will be a separator also. But the new separator is going to be this splitter."

Adding to the aura of his first appearance against a true major league lineup is the fact Rheault was handed the ball by second-year Cincinnati manager David Bell, the man who served as the vice president of player development for the Giants during the Northern Ontario product's tenure with the San Francisco organization.

"David Bell is amazing," said Rheault. "He creates an environment where players are comfortable, and when people are comfortable, they can not only play to their potential, but even higher."

Still, there is only so much comfort that Rheault could enjoy when facing the likes of Storey, who, last April, became the fastest shortstop to ever reach the 100 home-run plateau, besting the mark previously held by Alex Rodriguez.

"It's still baseball, that's kind of what I tell myself," said Rheault. "It doesn't matter who is in the box. If Mike Trout is up, I can't go out there trying to do more. If I try and do more, that never works out."

There is clearly a new maturity to the way he approaches his craft. Each incremental experience is building upon the last. During his time with Team Canada, Rheault was guided by coach Larry Walker, whose election to the Baseball Hall of Fall was announced a little earlier this year.

"Just getting to be around him was an amazing experience," said Rheault. "Just the way he carries himself. He's super humble. It doesn't matter who you are, he will talk to you. That humility from a Hall of Famer is pretty eye opening.

"Just being around probably the greatest Canadian baseball player of all time, and knowing him on a personal level, who gets to experience that? It's just one more thing to be thankful for.

"All of these new experiences, early on in my career, I would have taken for granted. But now, as I get older, I realize that's pretty cool."

Byfield named 2019-20 Wolves MVP as team caps off shortened season
Mar 28, 2020 12:00 PM
Comments
We welcome your feedback and encourage you to share your thoughts on this story. We ask that you be respectful of others and their points of view, refrain from personal attacks and stay on topic. To learn about our commenting policies and how we moderate, please read our Community Guidelines.