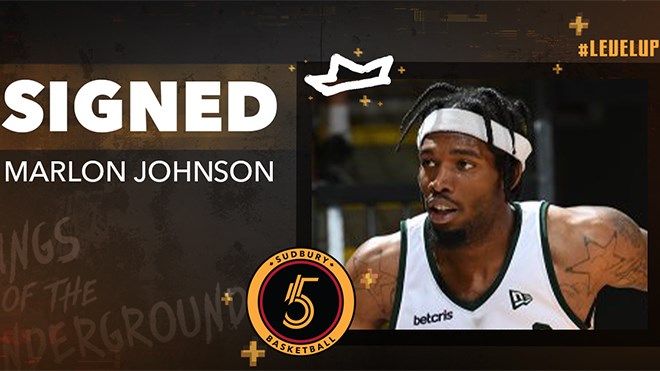 Marlon Johnson announced as the latest addition to the Sudbury Five roster. (Supplied)

The Sudbury Five has announced that 6-10 forward Marlon Johnson will be joining them for the upcoming 2019-20 season.

The 25-year-old was born in Chicago, Illinois and attended New Mexico Highlands prior to joining the league.

He most recently wore green and gold for the Saskatchewan Rattlers of the Canadian Elite Basketball League, where he helped win the league championships and was named a Defensive Player of the Year finalists.

In his first year with the team, Johnson averaged 9.5 points, 7 rebounds, one block, and one steal per game.

He is the second Rattlers player to join the Sudbury roster this year, followed by 27-year-old Jelane Pryce.

“The minute I saw Marlon play one game I knew he had to be on the Sudbury Five,” said Logan Stutz, head coach of the Sudbury Five in a press release. “I immediately contacted his agent and then contacted Marlon.

I watched him all summer. He is the perfect fit for Sudbury, and I can’t wait to show the fans what he’s about.

Not only will he give us endless energy and dunks, he has won a championship in Canada. Overall, he brings a lot to the table and will help us win a championship here in Sudbury."

“I’m proud to be a part of the Sudbury FIVE,” said Johnson in the release. “In my opinion, it’s the best NBL organization by far and it’s going to be a great year for us and FIVE fans.”

The Five take the court in their pre-season opener Nov. 22 against the Moncton Magic.

More information on the Sudbury Five and where to get tickets can be found here.