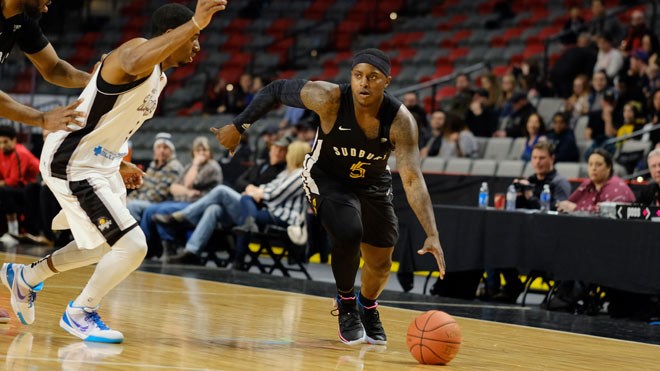 The Sudbury Five picked up a win at Sudbury Arena Saturday, March 7, in their first of two back-to-back games against the division-leading London Lightning.

Coming off a two-game skid coupled with recently losing towering forwards Marlon Johnson and Carl Lewis III to other leagues, meant the Nickel City looked pretty vulnerable taking the court. But it would take more than a short-staff to stop the super-guard tandem of Sudbury's Braylon Rayson and Jaylen Bland.

The dynamic duo contributed 14 points each in the first quarter, helping Sudbury make its biggest leap on the scoreboard that evening. London contributed 29 of their own, including seven from Cameron Forte, to close the quarter 37-29.

London's Xavier Moon led both teams in scoring in the second round, with five field goals and two three-pointers, but without much in terms of support from his team, the deficit remained. Bland was right on his heels, earning 10 points to his opponent's 12, to maintain the Nickel City's steadily growing lead.

The score was 71-56 in favour of the Nickel City at half-time.

Sudbury had a slow start to the second half but still managed to maintain their lead over London, earning 24 points that quarter to their 22. Much of this growth resulted from the efforts of the Five's JR Holder, who contributed five field goals, one three-pointer, and two free throws, to close the quarter 95-78.

London gave it all in the final quarter, scoring the most points per quarter that night with a total of 41, but Sudbury was hustling right alongside them. The Five added another 36 points to their lead that quarter, including seven field goals from Rayson, five three-pointers and three free-throws.

National Basketball League Canada MVP for 2019, Rayson scored a remarkable 49 points that evening, including 16 field goals, 8 three-pointers, 9 free-throws, four rebounds, and seven assists. Rayson maintains a 44.3 average in field goals, 33.3 per cent in three-pointers and 88.9 per cent from the line.

London's Moon led his team in points that evening with a total of 26, including 11 field goals, four three-pointers, seven rebounds, and three assists. The Alabama native carries a 50.6 per cent average for field goals, 45.5 per cent for three-pointers and an impressive 90.7 per cent from the line.

The London Lightning continues to lead the Central Division ahead of the Sudbury Five, with a record of 14-8 and 12-9 respectively.

The teams will meet back on the London court Wednesday, for their second last matchup of the regular season.