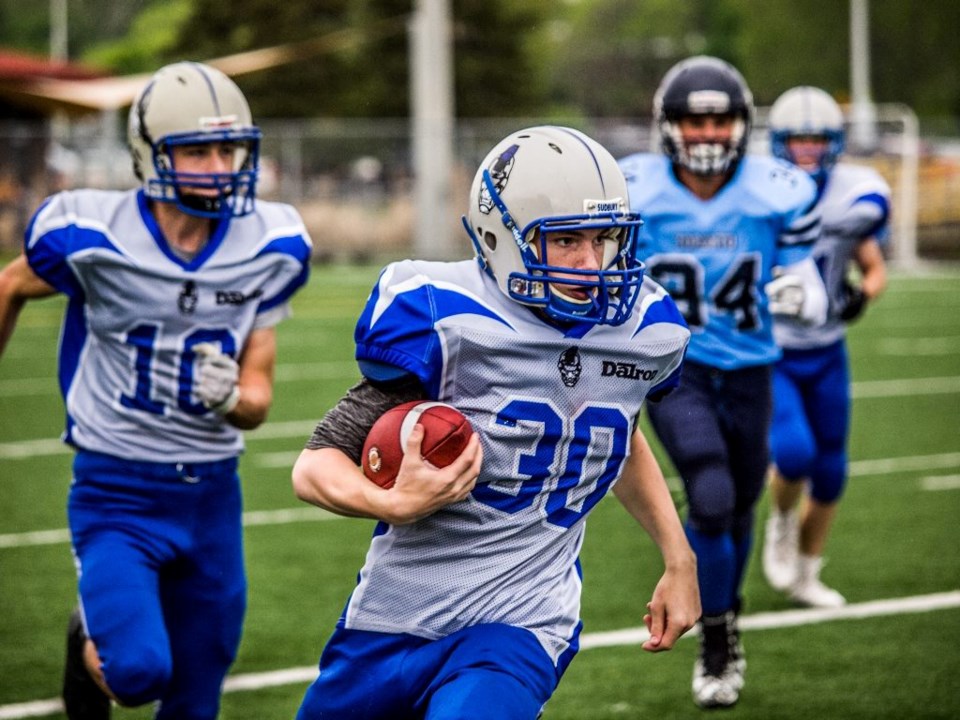 Josh Giroux (pictured here playing for the Sudbury Jr. Gladiators) ran for 200 yards and three touchdowns for the Lo-Ellen Park Knights in week one. (Supplied)

There are still many more questions than answers with one week in the books in the SDSSAA Senior Boys football league this fall.

Realistically, what exactly are we to make of a St. Charles Cardinals trouncing of a woeful Collège Notre-Dame Alouettes side (77-0), with the victors still excusing their way into the end zone in the dying minute or so of a now straight time game.

Does a surprisingly close 10-0 St. Benedict Bears victory over the Lively Hawks speak more to a better than expected Lively formation, especially on the defensive side of the ball, or are the Bears having a tougher time dealing with the pressure of their lofty pre-season expecations?

Finally, does a convincing 25-0 Lo-Ellen Park Knights triumph over the Confederation Chargers suggest than new head coach J.J. McKnight has seamlessly pieced together the supporting cast, quite quickly, behind an acknowledged elite grouping that matches well with most in the city, or is the trouble in the trenches at Confed simply too much for the Chargers to overcome?

Mbuyi N'Galamulume finished with three touchdowns, two on interception returns, Ethan Teeter and Riley Yourth had two majors apiece, Devin Zloty, Braedan Madore, Tristan Day and Cameron Patterson reached the end zone once each (Zloty also threw for a pair of TDs) and Aiden Ragogna was flawless, going 11/11 in the PAT department as the Cardinals rolled the Als.

Friday in the rain, the vaunted Bears offense could muster only three points in the opening half against Lively, getting a single point on a field goal that drifted wide from Gabriel Campagnaro and tripling their score when the Hawks took a knee in the end zone, not wanting to risk something more catastrophic.

St Benedict did manage to finally celebrate a six-point score in quarter number three, when quarterback Adam Rocha connected with Tanner Pattison from inside the ten, on a night where both teams were dealing with knicks, bruises and bumps to key personnel.

Finally, the Knights also pulled away in the second half of their game against Confederation as running back Josh Giroux registered two of his three majors (and a good chunk of his 200 yards on the ground) in the final twenty four minutes of play, as Lo-Ellen took a 7-0 lead to the break and scored more than three times as many points in quarters three and four.

Action this week sees St. Charles visiting Lively in Walden on Thursday afternoon (4:00 p.m.), while CND and Confederation tangle in the Friday opener, followed by Lo-Ellen and St. Benedict.

This week also marks a full slate of both girls flag football games, as well as junior boys encounters, with the young ladies staging no less than 14 matches between Monday and Thursday, and the juniors accounting for another troika of gridiron showdowns.