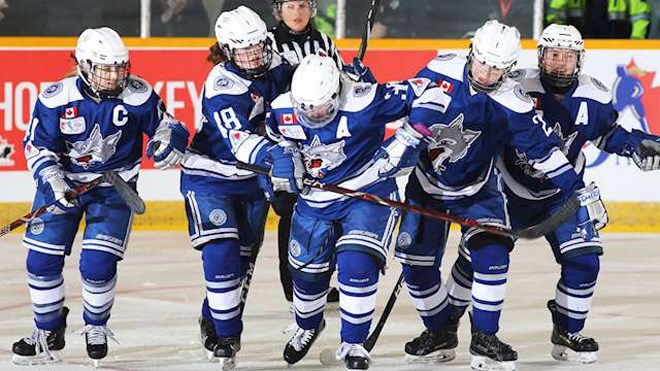 The 2019 Esso Cup is finally here and that reality is hitting home for the members of the Sudbury Midget "AA" Lady Wolves, who hope to bring the locals their second national championship, at this event, in the past four years.

"It's all felt so far away," said veteran forward Jenna Miller, one of the countless players who have committed to the post-secondary ranks, all set to join the Mount Allison Mounties come September.

"For the past couple of years, we knew this was coming, but now, just being out on the ice and seeing all of the changes being made here (at the Gerry McCrory Sports Complex), it's crazy to think that we are actually playing in this tournament, and that we deserve to be here too."

That much was made more than apparent when the Lady Wolves captured gold at the OWHA Provincials earlier this month, reeling off six straight victories capped off with a dramatic 3-2 win over the Stoney Creek Sabres.

"Every single game, we played as a team," said Sudbury blueliner Abbey Patterson.

"That really helped us. It was especially nice since all of the previous tournaments that we've had, we've placed second. In this final tournament, at provincials, to show everyone that we actually deserve to be here was nice."

In order to take the next step and claim gold at the Canadian Midget "AA" showcase in Sudbury, the Lady Wolves will need to deal with what is certain to be a very large and vocal local contingent of fans, several times the size of their crowd for a regular game.

"We all expect it to be a huge crowd, but we just have to focus on ourselves," said Patterson, who leaves for Bishop's University in the fall, joining a Gaiters team that must complete one more year of club play before merging into the RSEQ (Réseau du sport étudiant dun Québec). "We have to do what we know we can do.

"I think it will be nice to take it all in when we first get out there, have a strong warm-up, but appreciate everyone who is out there," said Miller. "But as soon as it comes time for the game, we have to focus on the ice, not look up in the stands and worry about who is watching."

In fact, every player on this team has been busy preparing as best they can for what lies ahead. In some cases, the focus has been with off-ice preparation.

"I've been going to the gym a lot and running a lot, because these periods are longer than our normal games," said Patterson. "I've been trying to get ready for the 15 extra minutes we'll be playing."

For others, the emphasis is on what they bring to the table on the ice, either individually, or as part of a collective trio.

"My line has been playing really good, recently - we all just click," said Miller, alluding to her work with her season-long ice mates, Makayla Gratton and Lauren Hancock.
"Playing with the same people for the majority of the year has helped out. We're able to carry out certain plays in different situations. I think we're a reliable hard working line."

Miller and company opened the round robin portion of the Esso Cup Sunday evening with a 6-2 win over the Halifax Fire.

Pacific region representatives, the St. Albert Slash (Alberta), are back at the Esso Cup once again, and have won the last two Esso Cups.

The Lady Wolves and Slash will meet Monday night at the Gerry McCrory Countryside Sports Complex, with both teams holding a 1-0 record. Mounting wins early on in round-robin play is of huge importance, as only four of the six teams will qualify for semi-final play on Friday.

Games come in quick succession for teams at the Esso Cup, with teams playing every day from Sunday to Thursday, vying for a spot in the knockout round. As the host team, the Lady Wolves will play all of their round-robin games at 7 p.m. at the Countryside Arena.

The Lady Wolves full schedule is as follows:

Ticket Info: By all accounts, the event is on the verge of being completely sold out. Anyone looking for individual tickets, especially for the Sudbury evening games, should inquire with friends and acquaintances and businesses who may have pruchased the tournament package, but might not be using all tickets at their disposal.

According to tournament officials, there are no remaining tickets that will be sold game day at the door.