GLP picking up, somewhat, where Team Chiro left off 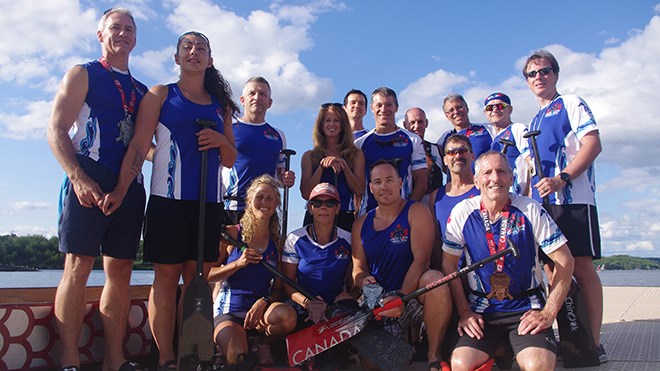 Team Chiro has morphed into Team Engineero - or so it seems.

True, the team that owed its very genesis to a group of Sudbury and area chiropractors who initially gathered to compete at the newly-launched Sudbury Dragonboat Festival had been gradually transformed, over time, to a much more diverse squad, one which included more than a few engineers prior to sailing into the sunset, not all that long ago.

Hold that thought, just for a few moments.

Many will still recall the incredible rung of success that was enjoyed in the first decade of the new millenium by the local dragon boating powerhouse. At its pinnacle, Team Chiro would compete with the very best crews in the world in Malaysia in 2008, despite boasting a vessel with an average paddler age of 37 years, noticeably older than most of their rival entries in the Premier Division at the time.

"We had a goal with Chiro, to compete at the Worlds," noted Brenda Loubert, one of three local carry-overs from that era who are now with the Great Lake Paddlers (GLP) assembly that recently qualified in seven different categories for the 2020 World Club Crew Championships in Aix-Les-Bains, France.

In total, some 17 local athletes represent our fair city within the context of Team GLP, joining forces with folks from destinations as diverse as Belleville, Pickering, Welland and London.

"Once we accomplished that goal, everybody needed a bit of a rest," added Loubert. "For the next couple of years, we kept poking away at it, doing a festival here and there."

A short stint, for Loubert, with the Sudbury Canoe Club (SCC) christened Team Phoenix boat was followed by a five-year hiatus from the sport, returning last summer with former teammates Peter Zuliani, Dave Arnold, Rob Gregoris and the province-wide gathering that is forging a somewhat similar trail to that of Team Chiro.

While a small handful of avid northern Ontario water enthusiasts would attend Worlds in Hungary in 2018, it was clear that there was a renewed vigour to accomplish more this year. The former Chiro mainstays were back in the boat with Loubert, as Gregoris and Zuliani handled the coaching duties with the Sudbury segment of the broader GLP.

Loubert could feel the emotions of the early days of Chiro, all over again.

"It draws a certain personality," she said. "You get to a certain level of competition and you always want more. We draw people that are very fit and looking for some high level sport that we can still participate in at this age."

As the good ship GLP set sail for Regina and the national championships last month, directly on the heels of the Sudbury Festival, the cast that runs about 70 paddlers strong would feature teams competing in Senior A (40-49), Senior B (50-59) and Senior C (60-69).

Along with being able to enter teams of 20 paddlers in Women's, Mixed and Open divisions, clubs would have to race at distances of 200m, 500m and 2000m, with aggregate totals used to declare divisional champions.

Beyond advancing seven of their nine entries to Worlds, the Great Lake Paddlers earned podium finishes in Open "B" (silver) and Mixed "C" (bronze), as well as taking first place, outright, in the Senior "B" Men's 2000m race.

It was a hectic three days in Saskatchewan, noted Zuliani. "You get a lot of cross-rostering," he said, explaining that "C" and "B" paddlers can paddle down an age category, though "A's" and "B's" cannot paddle up. As a result, many in the contingent of "C" paddlers were doing in excess of 20 races, all over a matter of just three days.

"It's just a matter of how fit you are to keep doing it, because it does take a toll on you," he added.

Most of the familiar Sudbury faces from the days of Chiro may have turned over, but there is still a degree of consistency in terms of a local flavour that is felt in certain elements of the GLP approach.

"Because we have always had a lot of engineers on the boat, we did a lot of analysis, and still do," said Loubert. "We GPS everything. We know exactly how much time it takes us to get out of the gates, or from there to the 100 metre mark."

"We're constantly looking at that, constantly pushing ourselves." And then there is the stroke itself.

"We have to agree on the technique, that's a big thing," said Zuliani. "I look at it as though there are really three paddling strokes: the long stroke, which is what we kind of do; the three quarter stroke, which a lot of the national teams do; and the Chinese, who use a short stroke in combination wih a very high stroke rate."

"And then you have people who are a mix of the medium stroke and the long stroke."

Yes, these athletes, who would fall under the "Masters" classification in many sports other than dragonboating, are more than a little serious in their pursuit of excellence. "If I am going to race, I don't like looking up at the podium if I should be up there," said Gregoris, who has attended likely more World Championships than any other local competitor, hitching his wagon to the likes of Outer Harbour and Heat, even paddling with a mismatched North American one year.

"I'm going to work my butt off to get there," added Gregoris. "After the race, I will celebrate with the rest of them. But winning is always a realistic option, if you're willing to put the time in."

And though complete team practices are difficult, given the geographic realities of the cast of GLP, the sum of the parts came together nicely in Regina. "We had really only paddled together maybe four times, with three festivals and a training camp," acknowledged Loubert.

"By the end of the weekend, we just gelled."

And come August 24th to 30th (2020), the Great Lake Paddlers hope to build on the tradition that was first established locally by Team Chiro, not all that long ago.