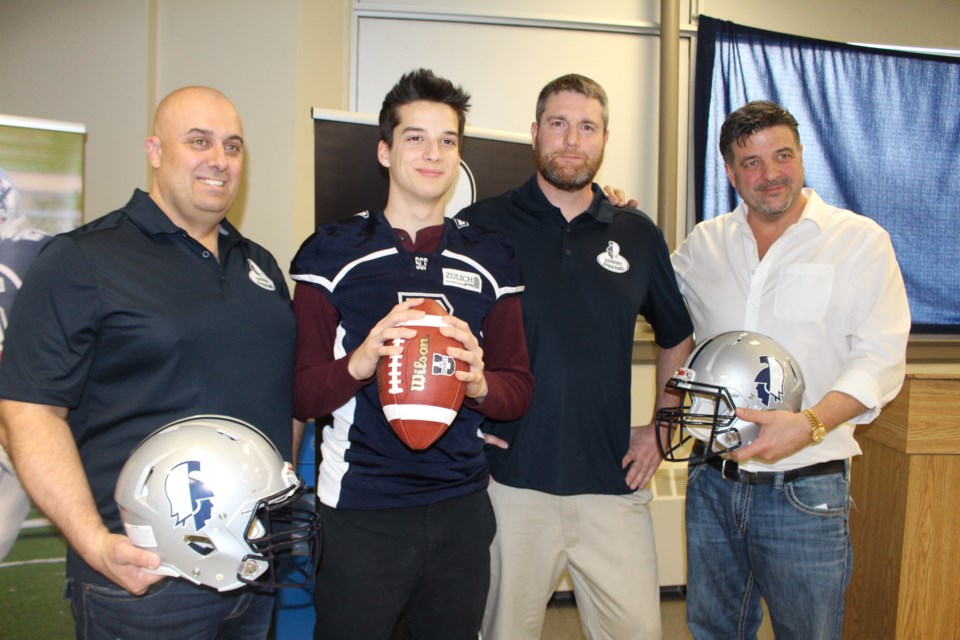 It's a big weekend for Sudbury's sports franchises as the Sudbury Wolves kick off their second round playoff series with the Ottawa 67's on Friday and the Sudbury Five play their first playoff game in franchise history the same night when they take on the St. John's Edge.

Despite the excitement surrounding the city's hockey and basketball teams, Sudbury Wolves Sports and Entertainment (SWSE) was talking football on Wednesday, as the organization announced the launch of the Junior Varsity Sudbury Spartans.

The team will serve as a feeder system to the Sudbury Spartans of the Northern Football Conference (NFC), as well as providing another avenue for young athletes in Greater Sudbury. The Junior Spartans will play in the Ontario Provincial Football League this summer, and SWSE plans to roll out a varsity team by 2020 as they look to fulfill their mantra "Spartans for Life".

"A 14-year-old could wear number seven as a JV Spartan and carry that number onto the varsity team and one day onto the NFC Spartans team as a 25-year-old player," said Gord Goddard, Sudbury Junior Spartans General Manager.

"We look forward to continuing to work with the local football community to develop players and coaches and build the game of football in Greater Sudbury."

Steering the Junior Spartans ship will be Reg Bonin, who comes in with an impressive resume coaching in the city's high school ranks as well as with the Sudbury Gladiators. Bonin once suited up for the Spartans and points to his time with the team as a defining moment on his football path.

"This takes me back to when I was 17-years-old and first trying out for the Spartans," said Bonin. "Seeing the older guys and the coaching staff and how they went about things, that really gave me a taste for what leadership was and got me wanting to coach. I'm excited and eager to hit the field with our players and coaches."

Thanks to experience on the sidelines in the city's high school football loop as coach of the Lively Hawks, Bonin is accutley aware of the talent pool in the city and says that there shouldn't be any trouble finding talent to fill out the roster.

"I know we've got athletes in this city, our biggest question is always linemen, but I know we've got a strong base of athletes," said Bonin. "This team opens up another avenue for those kids, you have 15 and 16-year-old kids playing hockey and those are draft years for the OHL, some of those kids who don't get drafted now have another option with football."

Building from the ground up is integral for the growth of the sport in Sudbury says Bonin, and having a clear path to potentially one day suiting up for the NFC Spartans is a big step in the right direction.

"We want to instill a love of the game in these kids," said Bonin. "The younger we go, the better it is for the kids as they move upwards through the team."

With the success of the Wolves winning their first playoff series since 2013 this year, and the Sudbury Five making the playoffs in their inaugural season, Bonin was asked if there was any pressure to meet a standard of success with his team.

"I don't think there's any pressure on that here," said Bonin. "Our goal right from the get go with this team is to get better every day."

Sudbury Spartans owner Dario Zulich echoed some of Bonin's sentiments when addressing those gathered at Wednesday's press conference inside the Sudbury Arena.

"I think it's very important to support local football here in Sudbury," said Zulich. "The future of football relies on youth taking up the sport. We feel this will not only benefit the Greater Sudbury football community, but will also help maintain a competitive football atmosphere. It combines well with our community values."