Turkey Gobbler Run organizer Neil Phipps said all it required was some thought and some good planning
Oct 20, 2020 5:00 PM By: Randy Pascal 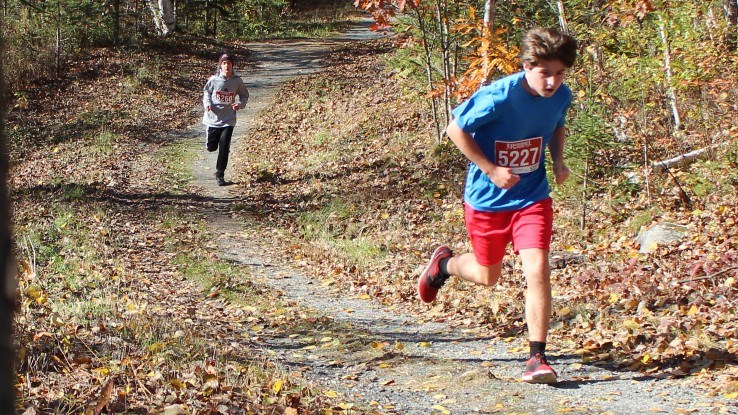 Participants in the annual Turkey Gobbler Run on the Walden Cross Country trails in Walden experienced a slightly different format this year due to the pandemic. (Mark Gentili/Sudbury.com)

Neil Phipps was just 18 years old, still in high-school, when he organized his first race.

The NAC (Northland Athletic Club) Spring Road Race would be the first of several dozen similar events in which the local volunteer would take either a lead role, or play some small part in hosting.

Over the course of the 30-plus years since his 1988 debut, Phipps has pretty much seen it all.

Heading into the 2020 Turkey Gobbler on Oct. 11 on the Walden Cross Country trails in Naughton, he had not previously attempted to navigate a cross-country race in the midst of a global pandemic, one which necessitates a great deal more physical distancing than what runners are used to for these mass-start functions.

"The notion of the waves came pretty early in the discussion, and the individual time starts were one of the first things that we knew that we had to do," said Phipps, who remains the primary lead for the Sudbury Fitness Challenge these days.

"We could have theoretically added another wave, but it turned out to be a gorgeous day and that would be another hour of time that mountain bikers could not be out on the trails."

Where some find obstacles, Phipps sees opportunities. The idea of simply cancelling the outdoor Thanksgiving tradition for a year without fully investigating the viability of an amended run was never a notion that crossed his mind.

"Right from day one, I wouldn't say that it was a given that we were going to do it, but my philosophy has been that we would plan as though it was happening," he said. "Obviously, if we couldn't do it, we wouldn't. But if we could, we would be ready. We were always willing, right up to the day of the race, to pull the rug out, if necessary.

"But in my mind, everything was happening until it couldn't."

In order to make it happen, there was an early concession made towards numbers, with Phipps and company maxing out at roughly 150 participants spread out in waves of departures that ranged from 9 a.m. right through until about 1:30 p.m. This year, the Turkey Gobbler sold out far faster than typical local race events.

"This is one of the bigger events that is happening locally, but it's still half the size of what it normally is," he said.

Part of the challenge, Phipps noted, stems from dealing with a sporting landscape to which nobody has a firm set of precedents in place.

"One of the hardest parts was actually getting someone in a position of authority to tell me what my actual criteria could be.

"We needed to confirm what category we fell into. It turned out that 100 people outdoors was the limit, which was fine, since we had already planned for well under that. This led us to about 30 runners in a wave. With two over-lapping waves, you still had a nice buffer for family and friends. It worked out well."

Like everyone else on hand that beautiful sunny fall morning on Oct. 11, Phipps was thankful for the very nature of his undertaking, one which enjoys some clear-cut advantages over many other sports.

"We're talking about outdoor individual sports," he said. "With the way that we have staggered it, with 30 people out per hour on two different courses, you really are never near that many other runners. And even if you do see somebody out there, chances are that they are going a radically different speed than you, so you are likely zooming by (or vice-versa).

"You can't do the Boston Marathon or the Ottawa race weekend, but these little races, I can organize without spending a lot of money until the week before," Phipps said. "It's not going to break us if it doesn't happen."

And with the required organizational alterations behind him, Phipps focused on what he knows best: putting together a quality event.

"My focus has always been on the race," he said. "I came up as an athlete, so the first thing I want is to have a good race, a challenging, entertaining course (that) is well-marked and marshalled, a course that people can race on."

And with that, Neil Phipps can now check off organizing a COVID- compliant cross-country resume from his bucket list.

Rayside-Balfour Canadians look to amp up their offence tonight against Timmins Rock
Nov 26, 2020 12:00 PM
Comments
We welcome your feedback and encourage you to share your thoughts. We ask that you be respectful of others and their points of view, refrain from personal attacks and stay on topic. To learn about our commenting policies and how we moderate, please read our Community Guidelines.