Introducing eventing to the masses 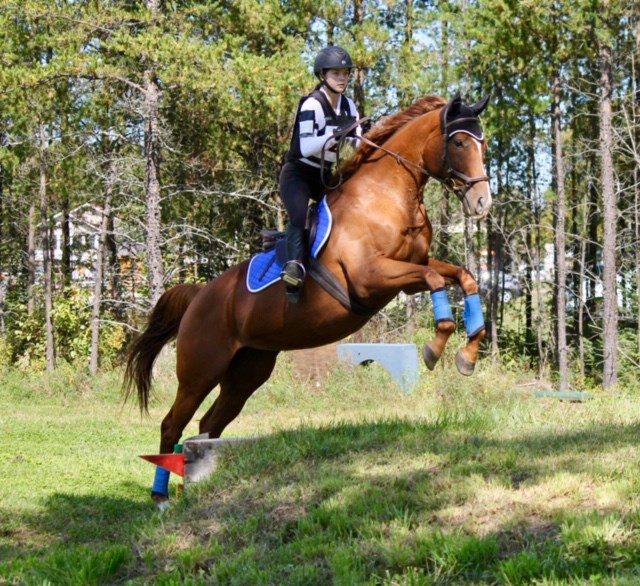 Janessa Dennison of West Croft Stables aboard "My OutKast". (Supplied)

Eventing could well be dubbed the triathlon of equestrian sports.

The truth is, perhaps somewhat sadly, that the name is inconsequential, given that the major hurdle facing those who partake in the activity in Canada lies in simply raising awareness of the existence of the event.

That is a challenge that Sudburian Frances Brisebois takes to heart.

Born in England, the career pharmasist and life-long horse lover moved to Canada when she was just 22. By the time that she and her husband (Mike) would call Sudbury home in 2006, Brisebois was more than ready to tap into her equestrian heritage, once again.

"I was lucky, because my mom and dad were very much involved when I was little," she said recently, as we walked around the grounds of West Croft Stables, the Gravel Drive site in Hanmer where Brisebois and friend Jenny Jelen were preparing to host an annual competition, last month.

"They both worked for the British Horse Society, and they would help score in the big, big events. This (eventing) is a much bigger deal in England than it is in Canada. Back home, there was the opportunity to do this every single weekend."

Wikipedia defines "eventing" as "an equestrian event where a single horse and rider combine and compete against other combinations across the three disciplines of dressage, cross-country, and show jumping". According to Brisebois, that is more than fair.

"It was originally developed by the military to help train the horses for fighting and has been in the Olympics since almost the beginning, but what we struggle with in Canada is getting people interested in it," she said. "There are not a lot of venues."

In fact, strolling around the acreage at West Croft, it's easy to see why. The mix of disciplines means that each individual component requires their own facility, with the cross-country sector a sprawling endeavour, all on its own.

Still, Brisebois and those who share her passion have no issue whatsoever justifying their interest, and the need for this particular equestrian tangent. "Equine Canada recommends that up until the age of 12 to 14, that you really don't specialize in your riding and that you try everything, so that you develop all sorts of skills," she stated.

"You're learning a number of skills that you can take anywhere afterwards."

On this morning, Jelen is serving as my example, highlighting the differences when moving from one event to the next. "In dressage, she's very upright, very quiet, using primarily body communication to get her horse to do whatever she wants it to do," explained Brisebois.

"Dressage is kind of like figures to figure skaters. With her hunter jumper position, she's out of the saddle a little bit, generally allowing the horse to move more underneath her. The cross country course uses both sets of skills."

Even the horses themselves bring an interesting mix to the table when it comes to event. "The horse that I am riding, East Side, is an eight year old who was a thoroughbred," said Jelen. "They tend to make especially good eventers, because they have that built in endurance."

Brisebois knows, under ideal circumstances, just what she is looking for in a horse that she would like to utilize to teach lessons in eventing at her stables. "You really want a horse that's a good jumper," she said. "You can teach it the flatwork."

And while her background has included plenty of involvement at the very highest level of eventing, the plans in Sudbury are much more modest. "Our goal is to help get people started, to give them a place to try it," she said. "There is a lot of fun to be had."

In fact, even as she prepared to have every square inch of her property overtaken by the 28 rider and horse field that would bring in competitors from Sault Ste Marie, Mattawa, North Bay, Parry Sound, Sudbury, and a small handful of the West Croft riders, such as Jelen, who compete down south, Brisebois was brimming with excitement.

"For me, what constitutes a successful event is that everyone who comes here enjoys all of it, and everyone stays safe," she said. "This sport is such an adrenaline rush for the riders. When you watch the kids do the (cross country) course, and they come off with these huge smiles, that's a success."

An "eventing" success, to be precise.