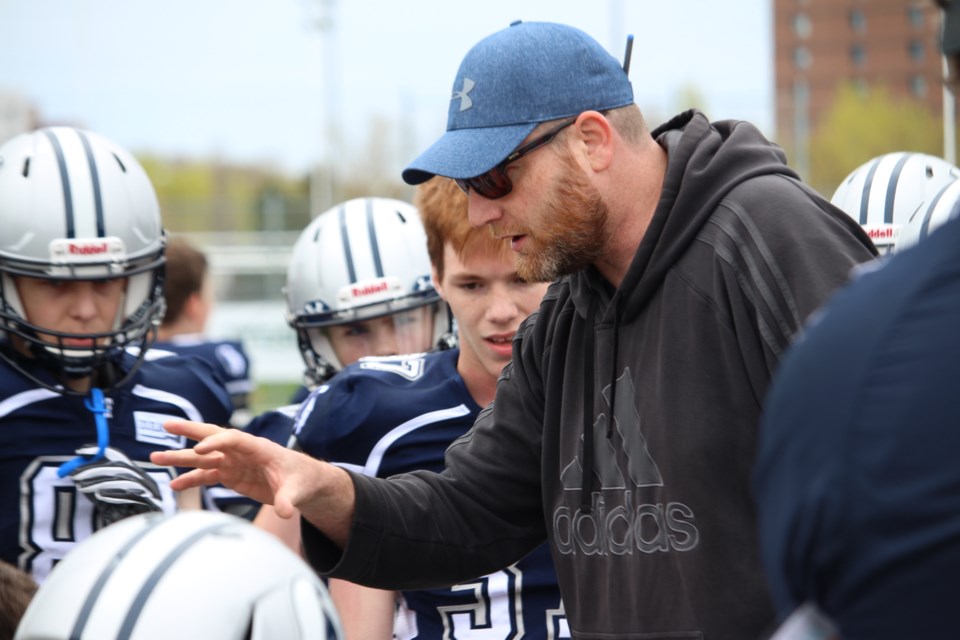 By his own admission, and quite understandably, coach Reg Bonin really did not know what to expect as he took his Sudbury Jr. Spartans (JV) into battle last Saturday afternoon at the James Jerome Sports Complex.

A shortened pre-season training period leading into league play in a loop (Ontario Provincial Football League) that had never before touched the turf in Sudbury, wrapped into an age bracket where local teams had not enjoyed a great deal of success in prior years, all combined for more questions than answers as Bonin and company welcomed the York Lions to town on the long weekend.

In the end, a loss that almost wasn't left Bonin feeling good about the OPFL ice-breaker for his young troops.

The Jr. Spartans and Lions would need overtime to settle the issue on Saturday, as York escaped with a 21-20 victory.

"Because it was our first game in a new league with a new group, I didn't know what to expect going in, but I was very happy with what we did," said Bonin.

The homeside opened up a 14-7 lead in the first half as quarterback Devin Zloty connected for a pair of touchdown passes with Blake Ramalho, the first of which covered more than sixty yards on a pass and run play.

"The second half was back and forth, sort of a field possession battle," said Bonin. "They got the ball back with a long field and a couple of minutes to go.

Unfortunately for us, they were able to complete a couple of passes and get into the end zone."

An enthusiastic crowd on hand would need to sit through, at very least, a very abbreviated fifth quarter. "I wasn't anticipating overtime; I've never been in a league where we've gone to overtime," said Bonin. "That was a learning experience."

York won the toss and elect to take the ball first, converting quickly to go up 21-14. Starting from 35 yards out, Zloty and mates marched it down to the three-yard line, with the St. Charles College product carrying it in for the major.

"We went for the two for the win after we scored, because we felt we could do it," said Bonin.

In fact, with starting place-kicker Cameron Moxam out of town for the weekend, Sudbury had gone with two point attempts on both of their regulation touchdowns, going one for two on a short run by Zach Primeau, who enjoyed a strong game in the backfield.

Though it is said quite often, this contest really was a matter of inches.

"It was just one foot off with the connection between the quarterback and the receiver," said Bonin. "It was just a touch overthrown. We were close to winning it in regulation. It was close at both ends of the game."

Overall, the very successful bench boss of the Lively Hawks football program had no problem sharing a wealth of compliments.

"I thought the offensive line held up really well, our receivers did some really good things, our defence was outstanding," said Bonin.

"T.J. Bertrand (defensive lineman) was a nuisance in the opponent's backfield the whole game. He was disruptive."

Defensive back Cooper Fontaine came through with a key interception in the end zone, doing his part in making sure this contest remained tight throughout.

Not the triumph that Bonin and company would have preferred, but a very good showing, in all other regards.

The Jr. Spartans are back in action on June 1, following a bye week, kicking off a double-header showdown with the North Bay Bulldogs, with the Northern Football Conference encounter set for that same evening.