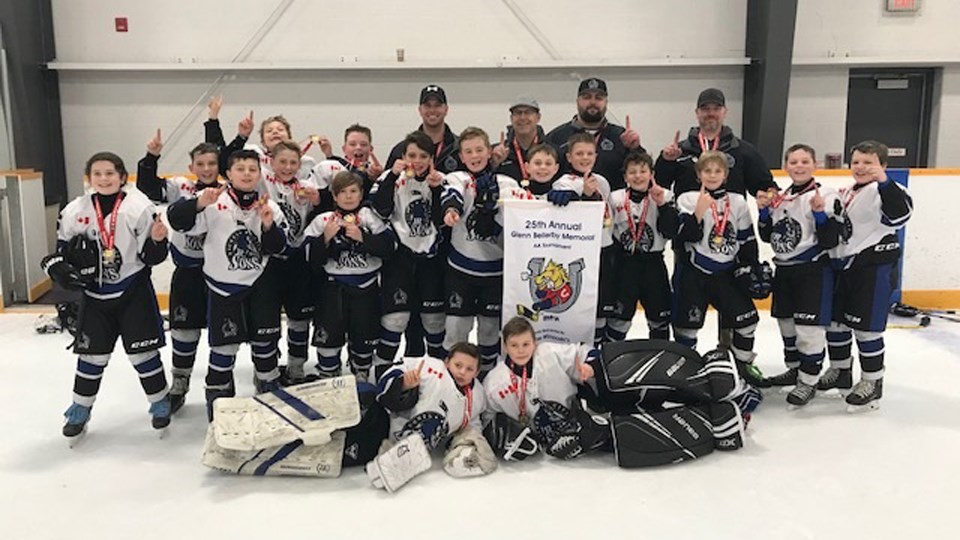 It would take one game to shake off the holiday rust, but from game two on, the Nickel City Minor Atom "AA" Junior Sons were certainly a force to be reckoned with, participating earlier this month at the 25th Annual Glen Bellerby Tournament in Barrie.

An opening game 5-0 loss to the Niagara Falls Flyers was quickly cast out of mind, as the Junior Sons dusted themselves off, trimming the Barrie Colts 2-1 on goals from Nick Christakos and Ty Belanger.

A 2-2 tie with the Whitby Wildcats (goals from Jackson Leveille and Cooper Niquet) would give way to a critical fourth and final preliminary round game.

Goals from Jackson Leveille, Alex Proulx and Nick Christakos not only propelled the Nickel City reps to a 3-1 win over the Waterloo Wolves, but also allowed the locals to advance to the semi-finals on a tie-breaker, edging Whitby .438 to .435 in the GF/GA calculation.

Coming just that close to elimination only seemed to spur on the Sons, who bested Barrie for a second time, this time in overtime, as Logan O'Shaughnessy and Jackson Leveille scored in regulation time, with Felix Roy netting the game-winning marker.

An upset in the remaining semi-final would cause the Junior Sons to face the Greater Toronto Capitals in the championship affair, the latter edging Niagara Falls 4-3 in their final four match-up.

In a tournament that kept fans glued to the edge of their seats, the gold medal affair was no different, with Nickel City and Toronto still scoreless, entering a fourth period of overtime hockey, with the teams playing two on two.

Given that assessed penalties were awarded penalty shots in OT, it was time for Bradley Huffman to provide the heroics, converting on his one on one showdown with the Capitals' netminder, but only after Nickel City puckstopper Ty Imbeau had already stopped a penalty shot of his own, with the teams playing three on three.

"We were able to spread out our scoring with all three lines and that, along with an incredible work ethic and great goaltending from both of our goalies played a huge role in our tournament win," said Nickel City head coach Joel Belanger.

Wolves drop their streak in Peterborough
Feb 17, 2020 5:07 PM
Comments
We welcome your feedback and encourage you to share your thoughts on this story. We ask that you be respectful of others and their points of view, refrain from personal attacks and stay on topic. To learn about our commenting policies and how we moderate, please read our Community Guidelines.