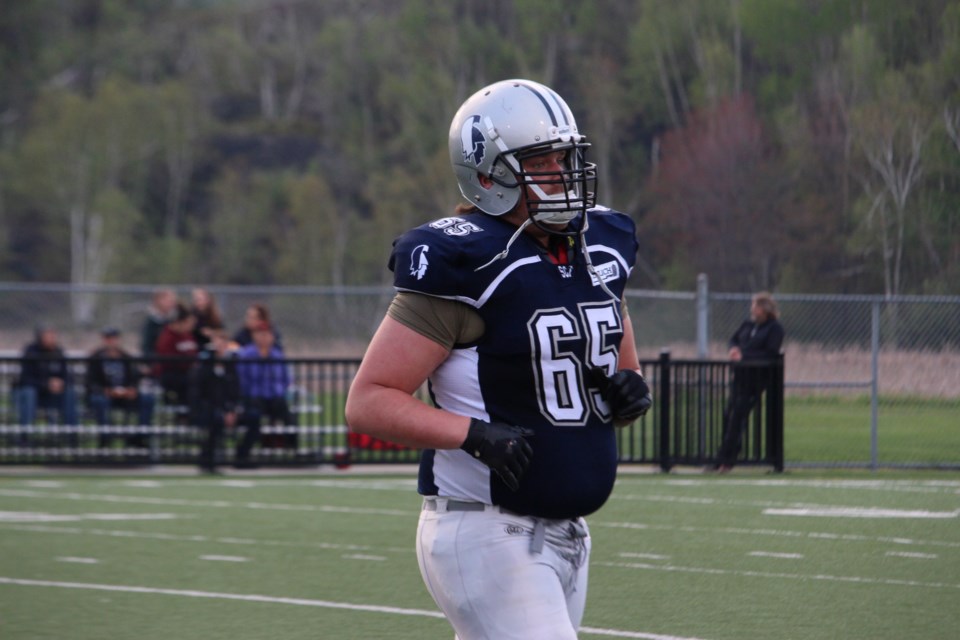 All things being equal, Sudbury Jr. Spartans head coach Reg Bonin and his staff would dearly love to ride a very balanced attack to victory, each and every week, guiding their young troops through their first season of OPFL (Ontario Provincial Football League) action.

But if a run heavy ground attack can show the way to a first round playoff triumph, they're OK with that too.

Running back Josh Giroux racked up 192 yards in rushing yardage, scoring three touchdowns and breaking tackles with regularity against an undermanned Orangeville Outlaws crew as the Jr. Spartans move on to round two thanks to a 41-21 win Saturday at the James Jerome Sports Complex.

Despite showing up with just 18 players, the Outlaws managed to keep things interesting until early into the second half. The homeside lead 14-7 at the break, with TD runs from both quarterback Devon Zloty (1 yard) and Giroux (36 yards) bookending a 3 yard scamper from Orangeville's Roy Vanderveen.

Sudbury kicker Cameron Moxam made good on both convert attempts and would finish the day 5/6 in the PAT department, while the missed conversion for the Outlaws was offset by a single on a 24 yard field goal attempt that drifted wide to open the scoring in the game.

With another uncomfortably humid day welcoming players from both teams to the turf, the depth of the respective rosters really began to show over the course of the final 24 minutes.

An interception by Deion McGregor on a ball that was deflected by Brett Bond gave the Jr Spartans outstanding field position early in the second half, with Giroux darting in from the seven just 69 seconds into quarter number three.

The Outlaws would punch back one final time, with Adam Murray recording the major and Garrin Morgan adding a two-point conversion, making the score 21-15 with 5:20 to play in the third.

Keeping things simple with a running game that featured gaping holes right up the gut of the Orangeville defence, the Jr Spartans marched again, capping things off on a 12 yard run from Giroux.

But it was another turnover, a key pick and solid return from Josh Morin which set up a two yard run from Alex Fleury that would finally make the Sudbury lead feel comfortable, even as Jacob Hosford (Outlaws - 66 yard TD pass from Nick Orr) and Zach Primeau (Jr. Spartans - 36 yard run) traded scores in the final five minutes of play.

"When Giroux hits the hole, he hits it fast," said offensive tackle Mshkwaat McQuabbie, just one key cog in a line that was a big, big part of the success enjoyed by the Sudbury running backs.

"If he sees the hole, he's hitting that hole, no matter how big," added the 16-year-old student at Lo-Ellen Park Secondary School. "We knew what they were doing, we just had to take advantage."

In fact, McQuabbie noted that he and his unit have really come a long way since training camp first opened back in late April/early May.

"As a line, we've started to grow, gotten to know each other a lot better," he said. "We always talk. With the line, it's important to talk. We see where they are, and we call it out."

Defensively, Sudbury did a nice job of keeping big plays, by the Outlaws, to a minimum. While the visitors enjoyed some success, the Jr Spartans would compile enough key stops to get the job done, recording a victory that might have seemed all but a given, initially, as fans looked over at but five or six spare Outlaws sitting on the bench.

"For me, it didn't matter how many players they had, whether they had more than us, less than us, we just had to beat them, because it's the playoffs now," said defensive end Joss Van Den Enden, who managed to break through and create havoc, in the opposing backfield, at a handful of critical junctures of the contest.

"I've been trying to work on my pass rush moves, the swim manoeuvre, and I found that really helped me today," said Van Den Enden, a 15-year-old grade 10 student at Lively District Secondary School.

"It was hard, sometimes, because they always like to get to the outside."

Still, Van Den Enden suggested that the momentum that was garnered as Giroux battled his way continuously through the Outlaws' defence could absolutely be felt on both sides of the ball.

"When we start the games, we're usually not playing our best," he said. "But once either the offense or the defence gets going, it usually helps the other, makes everybody play better. It gets everybody hyped up."

The Jr. Spartans will now face the York Lions this coming Saturday (July 27) at 4 p.m. at the James Jerome Sports Complex.

The Lions edged the locals 21-20, in overtime, in the very first game of the year for both teams, setting up what promises to be a highly entertaining rematch.