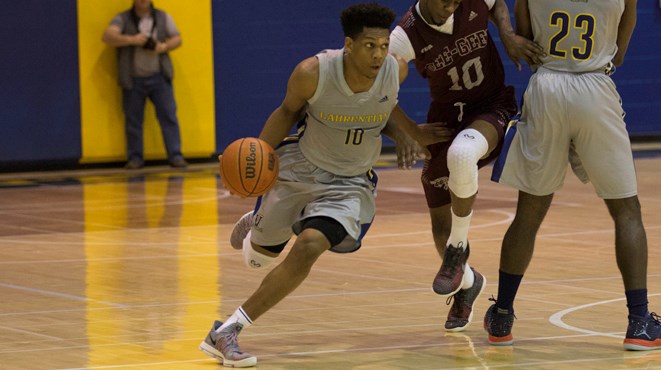 Gray propelled the Voyageurs to a pair of wins with Laurentian, knocking off McMaster on Friday by a score of 97-85. Gray led the way with 31 points on the night, pushing his career total to 1,726 and eclipsing the Voyageurs' long-standing mark of 1,722 which was set by Norm Hann in 1993.

With his 31 points on Friday, Gray moved into the top-10 in the OUA for all-time.

On Saturday, the Voyageurs followed up their win over McMaster with a 99-86 win over the Brock Badgers, with Gray pouring in 29 points and adding six rebounds and nine assists.

The pair of performances earned Gray OUA Male Athlete of the Week honours, and pushed the Voyageurs to a record of 8-1, and are hot on the heels of the unbeaten Carleton Ravens who sport a perfect 8-0 record in the OUA East Division.

Laurentian's women's basketball teams played the same two opponents as the men over the weekend, but fell short in both contests, losing to McMaster by a score of 70-57 and dropping an 86-64 decision to Brock on Saturday.

It's been a tough go so far for the women's team, who fell to a record of 2-7 with the pair of weekend losses.

On the ice, the women had a bit more success on the weekend, earning a 5-0 win over Ontario Tech. on Saturday and grabbing a weekend split after a tough 2-1 loss on Friday to Queen's.

The men's hockey team dropped both of their games over the weekend, with a 5-4 loss to Carleton on Saturday and a 5-3 loss to Ottawa on Sunday.

The Laurentian swim team just missed the podium at the divisional championships over the weekend in Toronto, finishing in fourth place overall.