Team of Punkkinen and Walterbury among LOE gold medal winning quartet
May 28, 2019 7:00 PM By: Randy Pascal 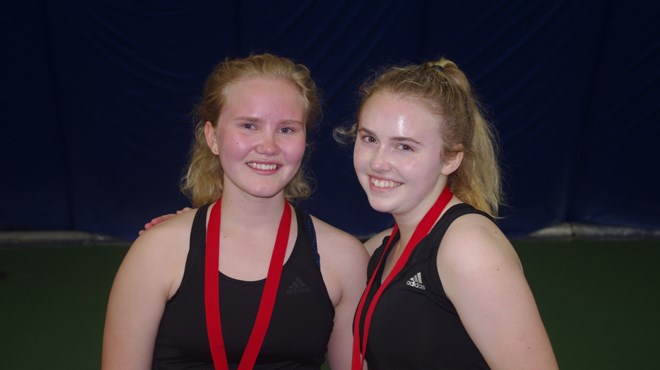 I guess we can now add tennis to the list of sports that the athletic empire that is the Lo-Ellen Park Knights high-school sports program can now lay claim to have conquered.

Representatives of the south end facility walked away with gold medals in four of the five categories that were contested Friday at the 2019 NOSSA Tennis Championships held at the Sudbury Indoor Tennis Club.

Only Emma Shea from North Bay, a Widdifield tennis afficianado who stopped LOE multi-sport talent Lauren Fearn in the final, came between the Knights and their bid for a clean sweep.

In fact, it was all-Sudbury finals in Boys Singles (Andrew Varghese of LOE over Sebastien Bouchard of CND), Boys Doubles (Abbas Dedanwala/Eric Dissanayake of LOE over Liam Williamson/Ethan Williamson of SCC) and Girls Doubles (Ava Punkkinen/Logan Waltenbury of LOE over Kianna Trottier/Kiana D'Attilio of Horizon).

The Lo-Ellen Mixed Doubles team of Bronwyn Mantle and Jeff Dodds knocked off the pairing of Alexa Robidoux and Malik Bradley from Odysée in North Bay, with all of the players above earning the right to compete at OFSAA in Toronto from June 3rd to 5th.

With Punkkinen and Walterbury both in grade 11 and returning, as a tandem, for another shot this year, the progress being shown was encouraging.

"I think that since we came in second last year, we wanted to do better and win NOSSA," said Punkkinen. "And, we wanted to make it back to OFSAA."

Certainly the girls are better equipped to force their opponents back on their heels, earlier in the rallies this second time around.

"I think that our serves are really improving, we're getting a lot more consistent," said Punkkinen. "Our first serves are actually harder than our second serves. It's not like we're just trying to put both of them in."

With every passing game, the chemistry between the Lo-Ellen duo has grown, with both athletes settling into an area where they can most benefit the team.

"Usually I'm at the front, but we sort of switch, some time, depending on where the ball goes," said Punkkinen. "Logan is a better baseline player and I think I play better at the net. That's just how it works out between us, and I think that's why we make a good team."

"When I'm serving, I will start at the back, in case they put the ball where I was serving from," added Punkkinen. "After that, it depends on where they place it. I try and go to the front when I feel that I can make it there in time."

The hope is that the improvement in their game translates to a slightly more successful appearance at OFSAA, even if expectations continue to be modest.

"Last year, we won one match while we were there, so this year, we want to try and win more than one," said Punkkinen.