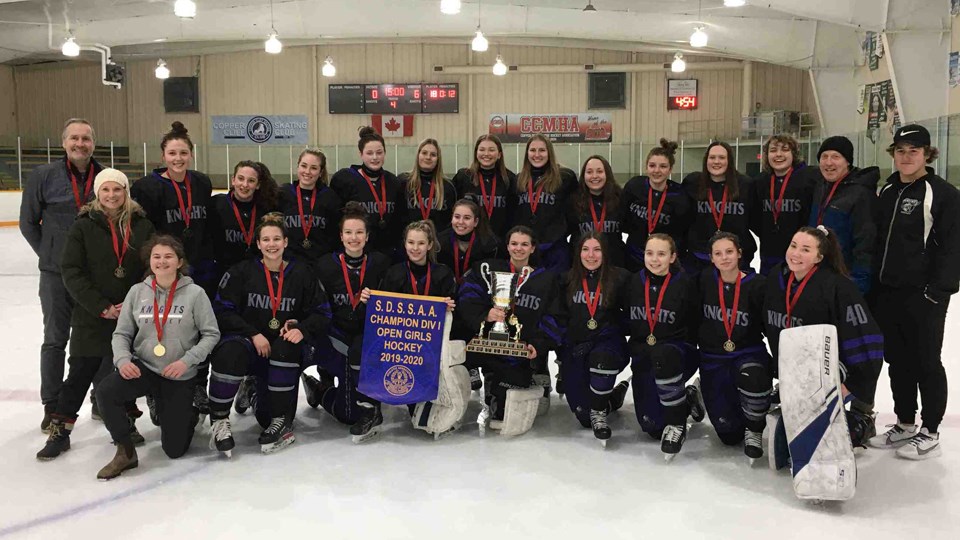 The Lo-Ellen Park Knights claimed their second straight SDSSAA girls hockey banner and are looking towards a run at OFSAA at the end of the month. (Supplied)

One year ago, the Lo-Ellen Park Knights girls hockey team were the new kids on the block.

While the south end SDSSAA powerhouse has enjoyed success in virtually every sport imaginable, it would be the 2018-19 Knights that would capture the Division I girls hockey banner for the first time in school history.

With a solid core of returnees and a lineup that was bolstered by some key additions who also suit up with the Sudbury Midget "AA" Lady Wolves, Lo-Ellen was viewed as the team to beat this year, right from the opening puck drop of the season.

Coach Larry Frank and the girls did not disappoint.

After needing a late game surge to take game one of the championship final by a score of 4-2 over the College Notre-Dame Alouettes on Tuesday, the Knights dominated the series-clincher from start to finish, overpowering CND 6-0 the next afternoon at the McClelland Arena in Copper Cliff.

Aiofe Mahaffy drilled home a pair of goals for the winners, with Kelsey Dunn, Mya Headrick, Bradie Roy and Hanna Smith each adding a solo marker, the latter also chipping in with a pair of assists. Kristen Mrozewski and Jessica Ouimet combined for the shutout.

"I don't think that yesterday we were ready to play," said Bradie Roy, now in her third year with the team and following in the footsteps of older sisters Kennedy and Darcie.

"We didn't come out as strong. Maybe we were thinking that we had beaten them before and this would be a fly-by. That wasn't the case - they pushed us really hard yesterday. Today, we came in with the idea that we had to outplay them everywhere that we didn't yesterday, and I think we accomplished that for sure."

Last March, the Knights followed up their city title by walking away with the NOSSA banner, as well, adding a silver medal performance at the OFSAA "A/AA" Girls Hockey Championships to the resume a couple of weeks later.

"We have a bunch of good skaters, a bunch of girls that can handle the puck, a bunch of shooters," said Roy. "If we put that all together, we'll succeed."

With the NOSSA "A/AA/AAA" Girls Hockey set for Monday and Tuesday in Sudbury, both Notre-Dame and Lo-Ellen will be competing, joined by the Chippewa Raiders and Algonquin Barons, both from North Bay.

The two teams advancing to the final on Tuesday at 3 p.m. at McClelland Arena will both make their way to OFSAA from March 24 - 26 (winner will qualify for A/AA in Stratford, while silver medal winners head to Windsor, site of the AAA playdowns.

OUA cancels all sports until April
Oct 15, 2020 7:00 PM
Comments
We welcome your feedback and encourage you to share your thoughts. We ask that you be respectful of others and their points of view, refrain from personal attacks and stay on topic. To learn about our commenting policies and how we moderate, please read our Community Guidelines.