Lady Wolves grab gold in the home of the Great One 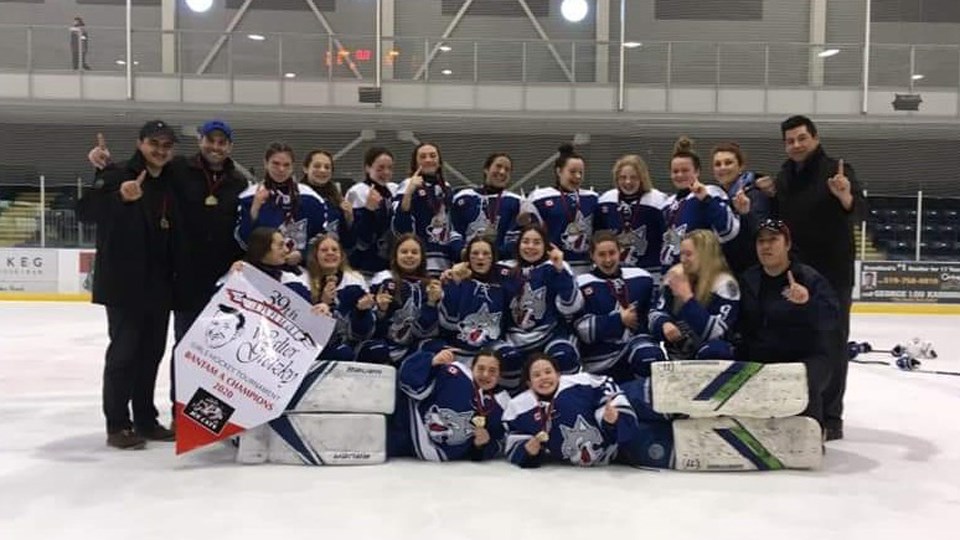 The Sudbury Bantam "A" Lady Wolves won in a shootout in the gold medal game at the  39th Annual Walter Gretzky Tournament in Brantford. (Supplied)

The Sudbury Bantam "A" Lady Wolves picked the ideal setting in which to play some really great hockey lately.

Competing at the 39th Annual Walter Gretzky Tournament in Brantford, at the home of the "Great One" himself (Wayne Gretzky), the locals secured gold medals with an impressive weekend of action.

The Lady Wolves got themselves up to speed with a game one 2-2 tie with the Clearview Ice Cats, with Ava Assinewai and Erika MacNeil pulling the trigger for the northern crew.

Deadlocks were in vogue on opening day as the Sudbury Bantam "A" girls closed out the evening with a 1-1 draw with the Soo Jr. Greyhounds, with Paige Lortie the author of the only Lady Wolves' tally.

More of the same on day two as the locals and the Clarington Flames find the scoreboard reading 1-1 as the final buzzer sounded, with Katelynn Jacques answering a game opening goal, by the Flames, just 10 seconds or so after the ice-breaker.

Undefeated but also winless entering their final round robin game, the Bantam "A" Lady Wolves calmed the Niagara Rapids by a final count of 3-1, as Katelynn Jacques netted her second and third goals of the tournament, joined on the scoresheet by Ava Assinewai.

A semi-final battle of second and third found the Sudbury squad registering a 2-0 whitewashing of the Clarington Flames, as goaltender Stevie Levesque ensured that goals by Amelia Bois and Katelynn Jacques would be enough to propel the Lady Wolves to the championship final.

Few on hand were the least bit shocked when Sudbury and Clearview finished regulation time tied at 2-2 in the gold medal affair, as goals from Kendra Shanks and Katelynn Jacques are offset by Ice Cats' markers from Sasha Siska-Humphries and Rachel Reilly.

With overtime solving nothing, the teams were off to a shootout, where a Jenna Jacobson strike to the back of the net was negated by a goal from the second Clearview shooter, setting the stage for the drama of third shooters.

Netminder Ashleigh Beauchamp stymied the final attempt for the first place squad, handing the heroics to teammate Hannah Staffen, who would make no mistake, ensuring that the championship banner would be making its way north, back to the Nickel City.