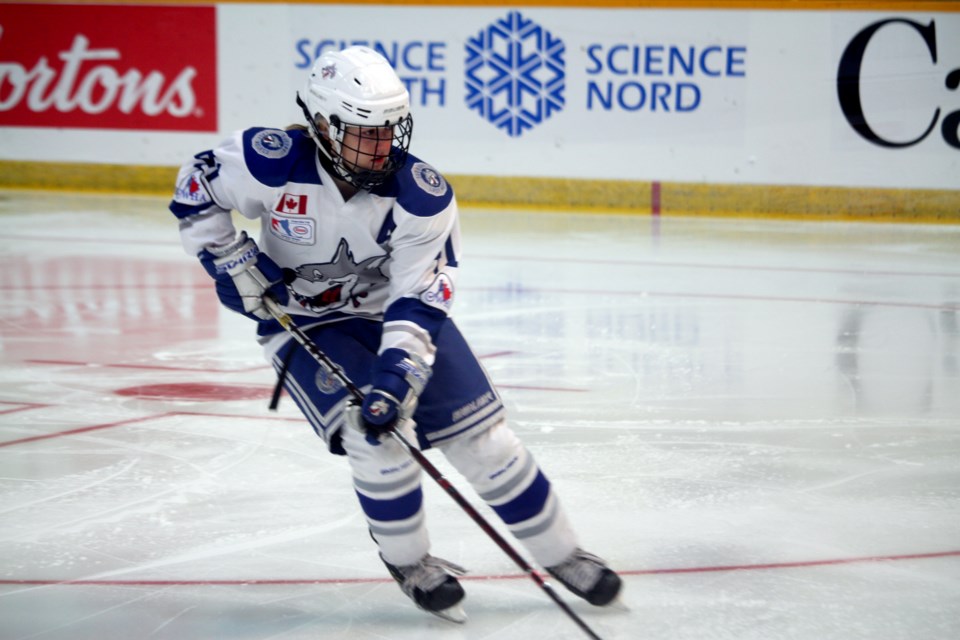 The powerhouse Sudbury Lady Wolves continued their hunt for the national championship last night when they took on — and sent packing — the St. Albert Slash, the two-time defending Esso Cup champions.

It was team captain Madison Laberge who was the hero of the night, coming through in the overtime period to score a power-play goal and hand the Lady Wolves their second straight win of the tournament, finding the back of the net at 3:59 of the first overtime period and propelling Sudbury to a 3-2 victory.

Laberge fired a blistering slapshot from the point to beat to beat Slash goalie Brianna Sank, as she struggled to see past a screen of Lady Wolves forwards.

The squad from St. Albert, Alta. is no slouch on the ice. They are, after all, the Pacific Region champions and the two-time defending Esso Cup winners. With a season record of 26-3-1 this year in the Alberta Female Hockey League, the Slash know their way around the ice.

As the period was winding down, Wolves forward Alexe Clavelle added yet another goal to her tournament record, beating Slash netminder Sank on the power play after a nifty little three-way passing play with Taylor Scott and Mylèene Lefebvre.

It was back and forth action for much of the next two periods, including a scoreless second period that became a battle of the goaltenders. Both St. Albert's Sank and Sudbury's Kingsley were turning aside shots left, right and centre.

The scoreless second gave way to the mostly scoreless third as these too highly effective offences looked for any chink in their opponent's armour to exploit.

Abbey Patterson of the Lady Wolves found that chink first, when she arched a shot over a sprawling Sank with less than five minutes left in the third. The Lady Wolves victory dance was shortlived though. The Slash's Isabelle Lajoie beat Kingsley with just 41 seconds on the clock to send the game into overtime.

Madison Laberge ended the Slash's night with just under four minutes left in the first overtime period, giving the Lady Wolves the win and improving their Esso Cup record to 2-0.

Tonight at 7 p.m., the Lady Wolves take on their OWHA rivals, the Stoney Creek Sabres. St. Albert meets up with the team they beat for gold at the 2018 Esso Cup, the Saskatoon Stars, at 3:30 p.m.