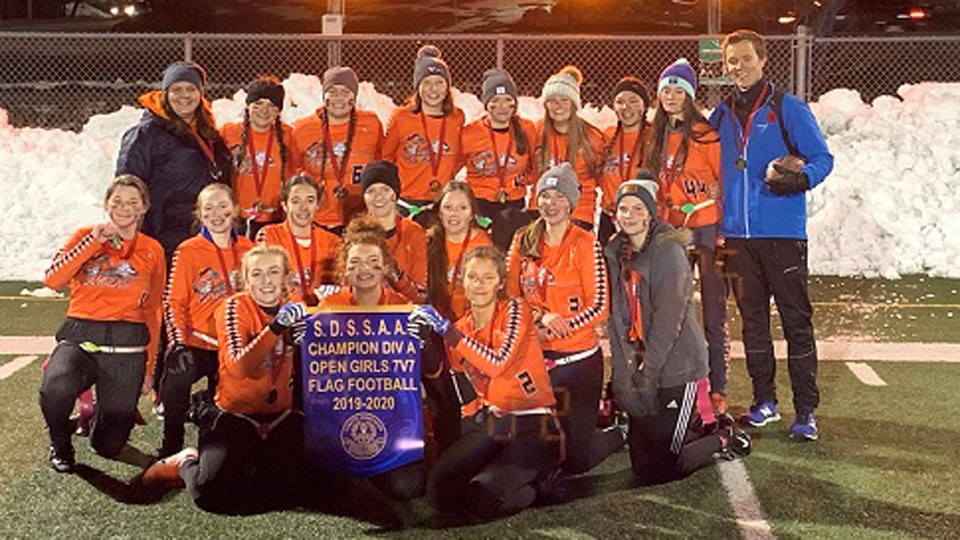 The Lasalle Lancers defeated the St. Charles Cardinals 12-7 in the SDSSAA girls "A" Division championship. (Supplied)

One can forgive the Lasalle Lancers girls flag football team for having something other than their championship encounter with the St. Charles College Cardinals on their minds last Tuesday evening at the James Jerome Sports Complex.

A serious car accident the previous Thursday morning would leave starting quarterback Emma White and safety and younger sister Cassy White unable to participate in the game, still in the hospital, after undergoing multiple surgeries that had the entire school sincerely worried about the well-being of the Lancer athletic mainstays.

"We knew that this game was for them, for the people who could not be there for that game," said speedy running back Hay-Lee Lavigne. "We tried to make sure we maintained a positive mindset."

Trailing 7-6 entering the second half, the Lancers were propelled to victory and their second straight SDSSAA Division "A" banner when Lavigne darted and weaved her way 28 yards for the game-winning score with less than ten minutes to play.

"I ran left and then went around everybody and swiveled away and kind of made my way to the end zone," Lavigne said.

The 12-7 victory capped off a highly emotional five day stretch, one which would see the school cancel a scheduled boys hockey exhibition game on the night of the accident, such was the concern for the entire student body at Lasalle.

"One thing that was important was just getting back together as a team," said Lance Patrie, who co-coached the championship team along with Catherine Carrière.
"Having a lunch time practice on Monday and a lunch time practice on Tuesday, and an after school meeting really helped us re-group, as a unit, and that's not even talking about strategy. That's just being with each other after the weekend, once we knew that everything was going to be OK with the girls."

While it was clear that all of the above was priority number one, there was that small matter of being able to fill the void for the seasoned veteran at quarterback, one who has guided the offense for the past two years.

"Mackenzie Roberts and Sydney Wachnuk took on the QB position," said Lavigne. "That was a lot of stress for them, so for them to be able to keep pushing on for the team, that was really, really well done. And then we worked together to cover the safety role on defence."

While it might seem simpler to bring in just one substitute signal caller, coach Patrie had his reasons for the alternating pivots.

"It was more to make sure to have both have a chance to play receiver as well," he said. "Mack was one of our top receivers this year as a slotback, and Sydney played at wideout. This made our offense a little more dynamic."

The Lancers opened the scoring when Wachnuk picked off a pass in St. Charles territory, setting up a short TD run for Roberts, before the Cardinals answered with a major courtesy of Samantha Paris, with Haley Hinds-Straub making good on the convert, giving SCC the lead at the break.

Given all that had happened at the school, it was no small wonder that Lancers arrived in droves, filling a fan bus and the stands on a night that dipped a few degrees below zero.

"Last year was a normal game, we all went out there very excited," said Lavigne. "This year, the crowd was insanely big, and that impacted us a lot, in a positive way. When we ended that game and the crowd was coming on to the field and surrounding us, the support and positivity that we had from everybody, we were all in tears, knowing we had done it for the two that weren't able to be with us. It was crazy."

Crazy and memorable and a fitting cap to a championship evening that kicked off with another great battle as the Confederation Chargers defeated the Bishop Carter Gators 15-7 in the Division "B" final.

Macie Savoie and Zoe Roper both reached the end zone for the winners, with Lara El-Darazi making good on one convert and Chelsea Leduc adding a PAT and single. Sierra Boyuk replied with the only touchdown that the Gators would register, while Paige Savard drilled the point after through the uprights.

Lancers land at the top at Five Invitational
Jan 23, 2020 7:00 PM
Comments
We welcome your feedback and encourage you to share your thoughts on this story. We ask that you be respectful of others and their points of view, refrain from personal attacks and stay on topic. To learn about our commenting policies and how we moderate, please read our Community Guidelines.