Liard: Wolves’ David Levin is looking for a big season

Israeli-born teen’s hockey dreams are still alive, but he knows he needs a strong season to move up the draft rankings
Oct 12, 2017 9:00 PM By: Nick Liard 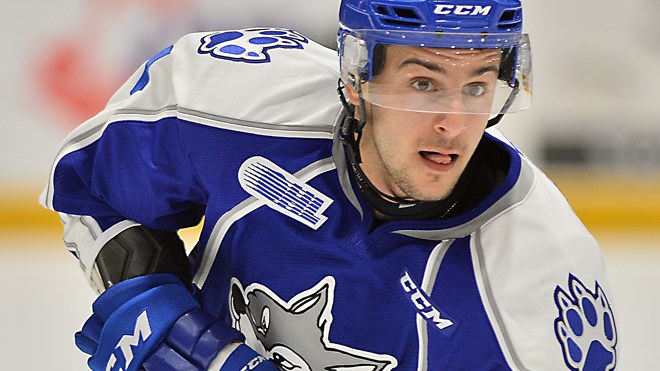 Sudbury Wolves’ only Israeli-born player, David Levin, has his eyes firmly on the prize: being drafted into the NHL. (Terry Wilson/OHL Images)

If you haven’t checked out David Levin’s goal from the Oct. 5 game against the Niagara Ice Dogs, I suggest you click this link and see it for yourself, because it’s nasty.

It’s also an example of what will get David Levin noticed and something he is going to need more of if he hopes to move up the NHL draft rankings.

David Levin is in a unique position. Because of a late birthday, he gets three full OHL seasons before he is draft eligible.

He has a chance not only to help his team push into the later rounds of the post season, but a chance to move up on his early draft rankings.

NHL Central Scouting gave Levin a “C” prospect status in their season opening ranking, which means they believe he will be picked in the fourth, fifth or sixth round of the 2018 NHL draft.

We spoke with Levin about it before the season opener. He said since coming to Canada from Israel when he was 12, his dream has always been to play in the NHL.

And the story is compelling. It’s the stuff great sports stories are made of: A kid from the desert falls in love with a game played on ice and dreams of playing in the NHL; comes to Canada, the land of hockey, and lands a spot playing in arguably the greatest major junior league on the planet.

Needless to say, this season is a big one for Levin and his hockey dream, and he knows it.

“I’m trying to not let it get in my mind, so I can play my game, but it’s still in my mind because that’s my dream,” said Levin. “Still looking forward for the season — that’s what I’m going to be focusing on.”

Still, despite his age, Levin is mature enough to know his hockey dreams rest on what he does on the ice today, tomorrow, this week and this season. Staying grounded and keeping his stick on the ice is tough, though, and his excitement lingers just below the surface.

Plus, Levin knows he’s part of a team and his success rests, at least partially, on his fellow Wolves.

With two Stanley Cup rings to his name, Head Coach Cory Stillman knows what the NHL is all about and he understands what Levin will need to do to get his name called.

“Come and play every night, and increase his game from offence to defence to the physicality of winning faceoffs,” Stillman said. “We’re excited it’s our job now to push him to be better.”

Beyond the physical though, become a professional hockey player of NHL caliber is as much mental as it is physical, Stillman said.

“The biggest thing is not to think about it,” Stillman said, a tall order to be sure, especially for a teenager. “If you come and you work hard, you play every day, you practice every day, those results will happen at the end. If we’re looking at June 1st already, then it could be a long year.”

Stillman it isn’t his place to speculate about Levin’s NHL chances. His job, he said, is to help players get where they need to be.

Trying to stay grounded, Levin said he’s going to concentrate on his game, and try to soak up as much knowledge and good habits as he can from the coaching staff, while being as prepared as he can, on and off the ice, for whatever the future holds.

Still, for a kid from the winter-free warmth of Israel to find himself lacing up for an OHL stalwart like the Sudbury Wolves in the cold vastness of Northern Ontario, there’s really only one word for the current state Levin’s hockey dreams.

“It’s really amazing,” said Levin with a big smile on his face.