Spartans defend their win streak against the Clarington Knights at 1 p.m. this afternoon, at James Jerome Sports Complex
0
Jun 29, 2019 11:00 AM By: Randy Pascal 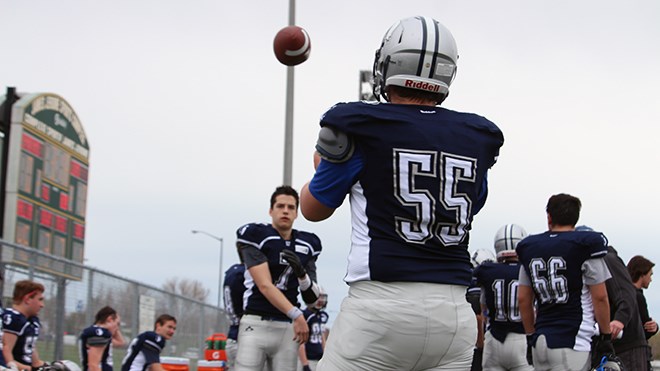 If football games are won and lost in the trenches, the Sudbury Jr Spartans could do far worse than building around the tandem of T.J. Bertrand (defensive tackle/nose guard) and Julien Senechal (left tackle) and their bulky brethren this year.

The play of the big boys on both sides of the line was instrumental in helping the local Ontario Provincial Football League (OPFL) crew register a key 33-26 bounce-back victory last weekend, improving their record to 3-2 in their inaugural season in the loop.

There is no denying that the parity in the OPFL is far greater than the Ontario Football Conference (OFC), where the Sudbury Gladiators previously resided, a reality that is not lost on any of the returning gridiron vets.

"Last year, when you hit the fourth quarter in those blowout games, everything was hurting," said Bertrand. "If you get a win, it doesn't seem to hurt as much. When it's an even playing field, you get the win, most of the the time."

A native of Barrie who played a single season within the Huronia Stallions organization, as a youngster, Thomas John Bertrand still remained thankful for the experience he garnered in a tough summer in 2018.

"Just understanding how competitive it was last year, it made me such a better player," he said. And in a four down league where opposing offenses simply have more opportunities to move the ball, Bertrand believes in a Sudbury defence that he feels can handle anything thrown their way.

"I think we're a better run defence," he said. "Our DB's (defensive backs) are stellar, but against the run, we've got Brett (Bond), whose a monster back there, and our ends keep containment. Up the middle, they can't get through."

Much like Bertrand, Senechal understands that he is made for play in the pits, banging bodies in the land where the oversized lads hang out. "It's just nice to be able to go out and hit some kids, without getting in trouble for it," said the 16 year-old grade 10 student at St Benedict Catholic Secondary School.

Yet when it comes to the decision to line up on offense, instead of defence, Senechal is clearly much more than a big bruiser. "Playing the offensive line is more mental, I think," he said. "On defense, you can just go forward."

Another one of the returning players, with two years of Gladiator experience on his resume, Senechal sees more good than bad, from his standpoint, to the move to a four down league. "It makes it easier to march the field, makes it easier to get touchdowns, but you're also on the field longer, which is more tiring."

In the long run, Senechal and his chums on the offensive line will benefit from the fact that Jr Spartans coach Reg Bonin and his staff are big proponents of featuring a very balanced offense, even if their lineman might favour one option to the other, at the moment.

"I think run blocking is harder, just because with the run blocks, there are so many different directions that people can come from, and you always have to keep your head up," stated Senechal. "On pass blocking, it's more left and right. On run blocking, it's all around you that you have to pay attention to."

The Junior Spartans are riding the momentum of a come from behind win last weekend, after spotting the Woodstock Wolverines an early 14-0 lead. The Clarington Knights will provide the opposition this afternoon, with a 1:00 p.m. kickoff time set for the James Jerome Sports Complex.

Sports Hall of Famer Jack Porter passes away
Feb 27, 2020 2:45 PM
Comments
We welcome your feedback and encourage you to share your thoughts on this story. We ask that you be respectful of others and their points of view, refrain from personal attacks and stay on topic. To learn about our commenting policies and how we moderate, please read our Community Guidelines.