Former athlete with the Davenport University Panthers and long-time Lively Golf Club member, reflects on the experience of claiming a win on home turf
0
Aug 25, 2019 2:00 PM By: Randy Pascal 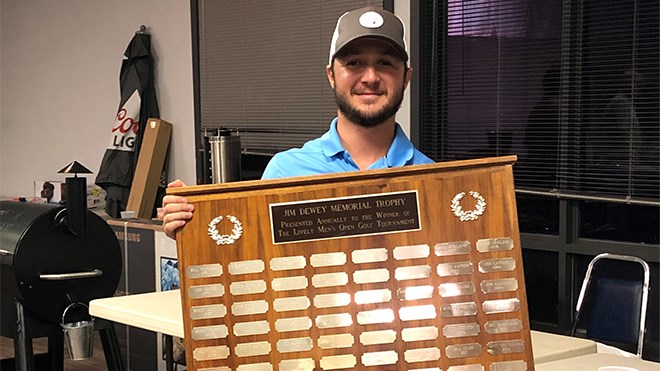 Alex Watier is not about to try and hide his attachment to the Lively Golf Club.

Pretty much growing up, each and every summer, on the scenic eighteen hole venue, Watier would groom his game en route to earning a scholarship to compete with the Davenport University Panthers in Grand Rapids (Michigan).

Returning home, he would serve as club pro for a couple of years, before deciding to move on, career-wise. Stands to reason then that capturing the Lively Men's Open tournament title for the very first time you mean just a little bit more to the 27 year-old golfer.

"It's one of my favourite wins," said Watier, a few days after pulling away from playing partner Dan Couillard and the field, last Sunday. "I won the Blind River Men's Open last year, and that felt great as well, but just the history I have at Lively."

"I've been playing the tournament since I was 16 or 17, and I've always wanted to win."

At the completion of opening round on Saturday, it was still, very much, an up for grabs event, with no less than nine players grouped in within three shots of the leaders, a troika that included Watier, Couillard and first year Laurentian Voyageurs' golf coach Dale Valade, all at two under par 69.

Following it up with a one over par performance the next day, Watier earned a four stroke victory over Couillard, with Chase Chatwell another stroke back. "I don't really play as much as I used to, so I just try and go out there and have fun," suggested Watier.

"I found that I actually have been playing a little bit better now that I am trying just to play for fun and not really put too much pressure on myself." Apparently, years of working on his swing has not yet gone for naught.

"Honestly, I hit the ball as good as I ever have, even when I was playing and practicing every day," said Watier. "My swings felt good all weekend, but I didn't putt very well. I was striking it unbelievably well, but missed probably six birdie putts within ten feet."

"I was confident in my swing, so I just kept rolling off that."

Breaking through with a Lively Open win for the very first time, Watier still has a ways to go to catch the club legend that is Brent Hatton. With no less than 11 championships to his credit, the 56 year old winner of the first flight this year has more than doubled the total recorded by Ian MacDonald, in second place with four, followed by a whole bunch of two-time winners.

"I think at my age now, you have to be realistic," said Hatton. "My chances of victory are probably more difficult now. My game is still good, but it's not as consistent as it used to be. And secondly, you've got a lot of younger players these days that can play the game and score well."

"In that aspect, the competition is tougher."

Matched against his peer group, Hatton still excels. This summer alone, he has hoisted the hardware at the Northern Ontario Senior Men's Championship, as well as in similar events in both Elliot Lake and North Bay.

"For next year, that's my goal, that's my sights, that's the big one where I want to do well," he said. "Can I win those? I doubt it - but I would love to be up there as high as I possibly can."

Sudbury sneaks by North Bay in overtime
Feb 27, 2020 10:14 AM
Comments
We welcome your feedback and encourage you to share your thoughts on this story. We ask that you be respectful of others and their points of view, refrain from personal attacks and stay on topic. To learn about our commenting policies and how we moderate, please read our Community Guidelines.